She hung up on me this morning. I think she's finally twigged that I will insist on singing happy birthday and no, I can't carry a tune. Or more likely, I woke her up out of a dead sleep after she worked late last night and she assumed I was calling my brother.

And since she's the best writer I know,  I thought it would be appropriate to list my

And for The Non Fiction Five Books Joy is hosting: 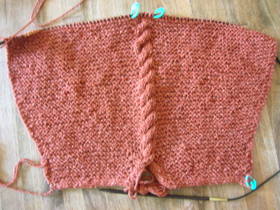 Remember this? Its Jacket of the Twinset? Well, Its no more. Now Its been frogged and renamed Golden Gate (originally called Lace Edged Elegance by the designer Lois Young in the Summer 1999 Knitters magazine.) Golden Gate, so far: 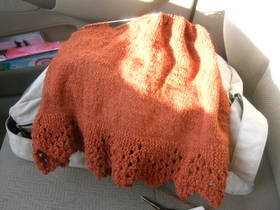 Not the greatest shot (yes, that is the passenger seat of my car) but at least you can see the orange Golden Gate Bridge color in the sun. Yarn: Elsebeth Lavold Silky Wool.

Oh, and I finally got the chance to use Scout's Messenger bag yesterday. It holds everything and more. 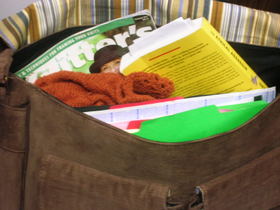 Love the Golden Gate. Good choice to frog and reassign the yarn. I'm loving the nonfiction book challenge. I select nonfic for the library and always feel like "my" books get ignored while fiction flies off the shelves.

Maybe it was telling you all that time that it wanted to be Golden Gate, which looks very pretty!

Dear SIL,
Thank you for the call. Yep, I worked late Tuesday and stayed up early Wednesday. I was in a dead sleep. Still life with cat on pillow. When I heard my beloved (MB) say, "Hi," I figured it was for him. Plus, until I actually woke an hour later and MB told me you sang for him, I'd forgotten it was my birthday. Thanks also for the compliment on my writing.
SIL

She hung up on you? LOL!

What time did you call?!!

I must be confused about how the 15 books thing works, because don't you have multiple books in a single decade there?!??

So not only do you wake the poor woman up, you torture her too? *laugh*

Oooo, GG is looking good! I think it's a much better use of the Silky Wool than the previous design. Believe me. I speak from frogging experience!

twig,
I wasn't tortured this year. MB has informed me that since I married into the family 20 years ago, I have to endure the singing. Yeah, well, whatever. At least spankings aren't involved.

I am a reporter and work nasty shifts. When the phone rings while I'm asleep and MB picks up, I naturally assume it's for him. SIL's singing voice isn't so bad, but as I commented upthread, I completely forgot it was my birthday and so missed out on the ritual. Interestingly enough, my Mom called the newsroom late last night to wish me a happy birthday. I didn't recognize her at first. She had her dentures out and the connection was bad. When I finally recognized her voice and her sentiment, I started to cry. She's been in a nursing home for three years because neither she nor I can take care of her, and this was the first time she called on my birthday since she's been there. MB and I took her out to Taco Bell on Sunday and she loved it. He didn't realize how much she likes their food, but I remembered. That tiny gesture was unrelated to my upcoming birthday, BTW. It is related to the fact that I don't spend enough time with her. I plan to change that.
SIL
P.S. re my writing: I have thought about your complement again. While I appreciate it, how mamy writers do you know besides me? I'm a hack. I do not write outside of work.

Chris,
SIL called about 12 p.m. our time, I think. Positively moderate for most folks, but I keep vampire hours. I do appreciate her thoughtfulness, in hindsight.
SIL

oh dear, now I really have to read Madwoman in the Attic, don't I?
melanie

Wow! There is alot of stuff in that bag!

Carrie- I really like the color of Golden Gate.

I'm a Trollope maniac and have read all the Barchester Chronicles and the other one, which I can't remember the name of.

Must be having a brain fart.

How come great books are always depressing ones? It's like comedies never winning the Academy Award for best picture - "art" has to make you want to open a vein before it's considered great. Huh. Love the sweater - it feels so good to repurpose something that wasn't working!

You do the same thing my mom does for me on my bday! that is so funny! :o) anyway, i really really like the new project you cast on with the silky wool yarn! it looks fab! is it a sweater/pullover or cardigan or short sleeved sweater? and the bag is being put to good use, i see! it really does fit EVERYTHING! :o)

Love the bag and the newly discovered project hiding in the old one :)! Great list - I've got to get going on that.

Your Lace Edged Elegance is beautiful and the messenger bag look great too.

Happy bday to your SIL!

Welcome to the Non-Fiction Five Challenge! I'm so happy to have you join us. I don't recognize any of your choices, so I'll have to find out about them through your reviews. Happy Reading! :)

Your knitting project is looking so pretty, especially there in the sun!

Oh my I loves me that bag, yes I do. Mmmmmmm.

And the silky wool is great in that lacy edged number. Good choice!

I've been debating joining both of these challenges...but that may be too much. I think you've inspired me to go on and read the Non Fiction five challenge ;) good luck!

The Madwoman in the Attic sounds like a book I need to find out about. The title intrigues me. I'm off to amazon.com to learn who it's about.