Just long enough so that it doesn't get cancelled. Haven't I lost enough shows? (Yes. I have.)

Picture of the Noro I bought 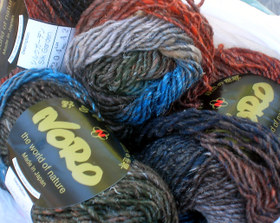 and the yarn store I bought it from. 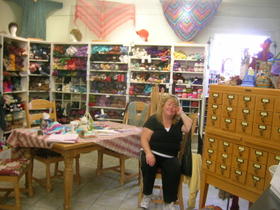 The Benicia Knitting Circle. That would be Adrienne looking much sweeter about being in a yarn store than I am in the ninety millionth antique store. Oh, and check out that card catalog! I lurve card catologs. The net is nice and I'm sure it's much, much easier/better/faster for librarians, but oh, how I miss card catalogs. 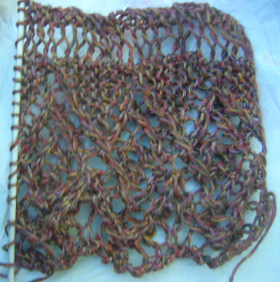 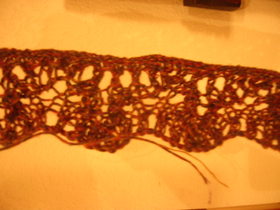 The two lace patterns I'm knitting instead of working on any existing knitting projects. Ostensibly they're going to be edgings for a T-shirt but I can't decide. That's the same yarn, different lace patterns.

Can you see the snail curl in the first pic at all? (There are 3 repeats of it, if that helps.)  Blocking would probably help immeasurably. Also a smaller gauge. The other is called.......possum stitch? Both from Barbara G Walker 2nd Treasury. The 2nd pic is only one and a half repeat because I liked the scalloping but not so much how the lace looked (for an edging) the more repeats that were done. It puffed out too much.

And in the interests of starting as many new projects as possible without ever finishing any, I finally strung beads on yarn this morning for beaded socks. (Note: Strong light and reading glasses would've helped the Stringing of Beads go a little faster. Maybe not choosing the one catawampus needle either.)

It took eons because I couldn't decide on the yarn, or the beads to go with, but since it's my first pair, I finally grabbed my orphan skein of beige Schle-tcy something and blue beads.

They'll probably be anklets. I'm thinking about knitting both pairs at the same time from opposite ends of the sock, so at least when I run out of yarn, it'll match.

Hez sez: "Ah, I see you've finally figured out how to crop pictures, Mom! Couldn't have chosen a cuter model. And no, I do not want to come in. But don't shut the door........I might change my mind." 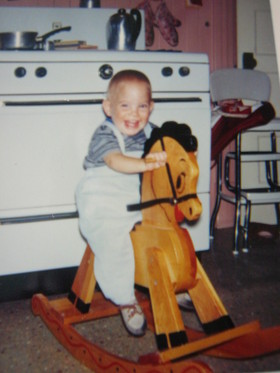 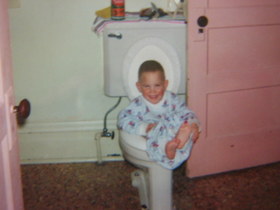 Happy Birthday to you. (I'm still calling and singing.) Somewhere there's a great picture of him in the stockades at...Plymouth, I think, but I couldn't find it.

In other (lesser) news, I finally got some sleep, am marginally less cranky, finally bought some Noro yarn and made it to some watery sites. 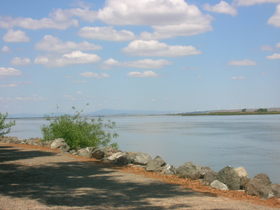 The view from Humphrey's in Antioch 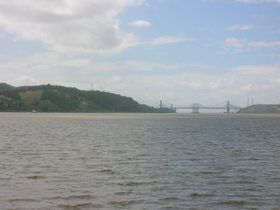 View from First St in Benicia. 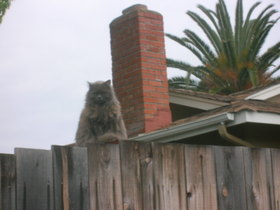 Which one looks better? 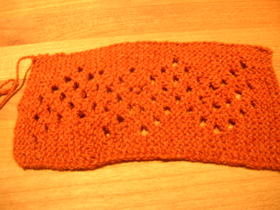 Or the second one I knit? 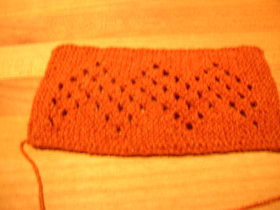 Yeah, I thought so. Too bad I need two. I was going to tough it out, but I couldn't stand it and frogged it. Also? I started knitting swatches of lace for cuff edgings of shirts. Wouldn't want to finish anything, y'know.

Hez went to the vet Wednesday and spent two days sleeping it off. Scared me silly, but she's okay now.

I've finished reading Alas, Babylon, A Canticle For Leibowitz and am currently reading Blindness, Madwoman in the Attic (still) , Synergy and A Brave New World.  Not the Aldous Huxley one. In fact, maybe it's not titled that. It's about the New World at about 1588. I've written an incoherent book review of Alas, Babylon and haven't even attempted Canticle. I did enjoy Canticle for Leibowitz quite a lot, more when it occurred to me to look it up on Wikipedia and get the Latin translations. Why did I never learn Latin?

I'm on vacation! Which is mostly translating into doing a whole lot of not much but at least I've seen my friends again. If I could only get a decent night's sleep, I might actually feel like a human being.

Wednesday will come, won't it? Won't it? 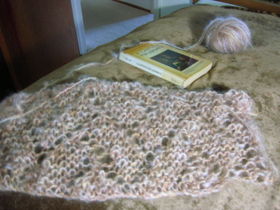 This is what I'm doing with my hostess yarn from Peeve (so far)! I love it, but I'm afraid I don't have enough yarn to make it big enough. Maybe just two repeats instead of three. The huge needles (size 17) are oddly soothing on my hands though. Keeping track of a 14 stitch pattern three times in one row? IMPOSSIBLE.

I did get some good news today, my brother & sil's fourteen year old smart-as-a-whip cat, Lindsey's prognosis is "probably not cancer" which is much much better than "probably is cancer."

Okay, what am I thinking? I have no time to do this. Arrrrrrrrrrgggggggghhhhhhhhhhhh.

The Blind Assassin by Margaret Atwood. My first completed Atwood novel! Although it took me roughly a month to get through the first 80 pages, I flew through the last 400 or so. The differing threads of the novel weren't difficult to follow but the narrator was more than just unreliable, she was a tease. I found hard going at first but then got caught up in the varying storylines and the clever weaving of them at the end.

The Bookwoman's Last Fling by John Dunning. Hmm. I can't quite remember anything about the book other than it was a fun quick read.

Waiting for the Party by Ann Thwait. There are so many things I had no idea about Frances Hodgson Burnett! For one thing, I didn't realize how freaking popular Little Lord Fauntleroy was, nor did I realize that FBH was considered a serious author for much of her life - Henry James envied her, Israel Zangwill was a long time friend and correspondent.

She lived in England as a child. After her father's death, her mother moved the family to Tennessee on the urging of her uncle, who couldn't fulfill his promises of a better life due to the outbreak of Civil War. Frances was just 15 years old. I never would have imagined she was in the United States at all, much less lived there from her teens.

She moved back to England off and on as an adult, able to support a fairly lavish lifestyle on the output of her pen. She married twice, both fairly badly. One pretty much hassled her into it. In fact, they both did, although blackmail would probably be more accurate on the second marriage.

Her defense of her book Little Lord Fauntleroy being written as a play by someone else was one of the deciding cases in coypyright law. Before that, anyone could write a take off on your work and not owe you a dime for it.

All in all, pretty darn fascinating.

The Secret Garden by Frances Hodgson 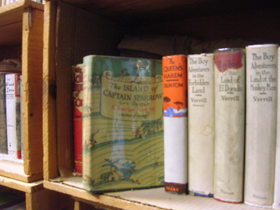 Burnett: Ha. I knew the grown ups didn't have that much to do in the book and the poor nurse and Dickon's Mother were entirely cut out of the play I saw. The book held up fairly well to my childhood memories of it (considering that I LOVED it as a kid, I was out of school sick for two months when I was 11, so I identified pretty strongly with Colin). Quickly, it's the story of two disagreeable cousins learning about life, limitations and the great outdoors. More or less. The silly secrets grown ups keep.

Back to Serendipity Books. Notice the book pulled out on the shelf? The Island of Captain Sparrow has been around for a long, long time. Dang it, I forgot to go back and grab it. Next trip. (I did pick up a book on Henry James and HG Wells Quarrel and the Collected Works of Branson Bronte.)

Here's the fabulous Hostess gift Peeve insisted on buying me (sweet girl!) even though said hostessing consisting of going to my favorite shops and restaurant. I think a gorgeous lacy triangle scarf, maybe? 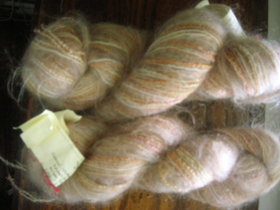 And look (below!) I've been looking for this for ages. It's destined to be the Persian Carpet Bag in Folk Purses. It's exactly the yarn that the bag called for! Yay Janet! 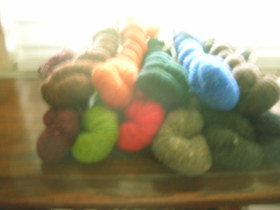 And this is the prize I won from Amy of Knit Think: Oh, BAD WORD! I managed to erase it adding in the link. GRRRRR. And the pic on the other computer because this one doesn't like to upload them lately. Argh. Well, let it be said, it's a very cool prize! The Buffy Musical CD! And one of the best cards EVER (except for the babbling brook one my brother gave me once.) I'll post the pic later on. 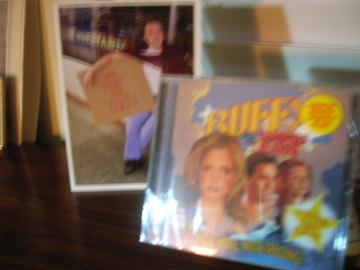 It is almost May, right?  Right?

Oh wow, I wonder what lies I checked on the quiz to come up with that result? I wish I was secretive and didn't wear my feelings on my sleeve. (Notice I'm not debunking the astounding or interesting person part. Hmmmm. ;)

Pictures of why I've always bought the Happy Cow myth: 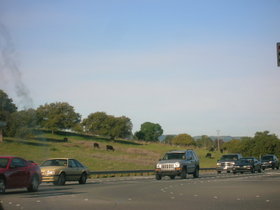 Peacefully grazing on the foothills. I have no idea whether they're dairy cows, meat or pets. Personally, I'm hoping pets. Whenever I'm walking around there, they'll all mosey down to the fence to stare at me and talk amongst themselves. Apparently I excite quite a bit of cow gossip. Freaked me out one day, they were all up at the top of the hill while I merrily walked along the path below (undoubtedly talking to myself) and I look up and there are about 30 cows pressed against the fence about two feet away from me, staring at me. I mean, sheesh! I can't talk to myself anywhere?

In knitting news, I'm about 15 inches into the body on Golden Gate, which means roughly an inch to go before the arm decreases. Woot! Just shows how much you can get done at stoplights on the way to and from work, which is pretty much the bulk of my entertainment time. 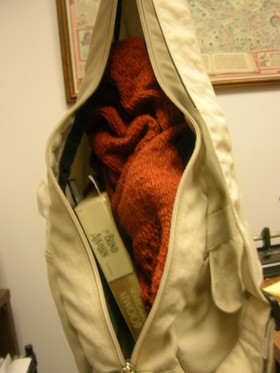 (Besides mindless TV at the end of a long, long day).

I've finally gotten about halfway through The Blind Assassin and am starting to be interested in the characters - no wonder I've never finished a Margaret Atwood book before. Talk about a slow build.

(See how I'm lugging my knitting and book back and forth? That purse is amazing. In fact, all my favorite purses have resembled Mary Poppins bag. Why yes, I do have a lamp in there! Well, maybe not, but a crochet hook, an extra circular needle, various technological devices I can no longer live without, etc, etc.)

Peeve is coming to visit me! Well, San Francisco. But me too!

In the wake of the pet food debacle, I've stumbled across an interesting blog, dogged blog and a more vet-centric one, Dolittler.  I think Hez's days of eating any kind of pet food prepared by anyone other than me is numbered.

Jericho on Wednesdays at 8pm. I am so addicted to this show.