Home Archives Profile Subscribe
Never Wordless. Even If I Ought To Be.
Thankless Thursday

I'm a theater going maven lately! Saw Richard III Thursday night at the Cal Shakes outdoor theater. It was good, but honestly, if the first play is good, they always produce a sequel.........but once they release the third.....Shakespeare was just milking the franchise. Bada-boom! Yes, folks, I'll be here all week. 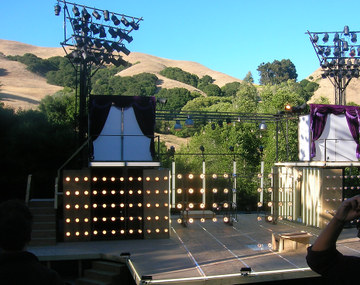 *I'll blame it on the play I saw yesterday. A "double feature", A Day in Hollywood/A Night in the Ukraine. The first was basically a series of musical skits with the Grauman theater and its ushers as the background singers/dancers - we (the audience) even got to do a sing-along to Over the Rainbow. One skit portrayed how Bob Hope's signature song, Thanks for the Memories was sung as a duet with Shirley Ross first in the 30's, as a long divorced couple meeting on a cruise ship for the first time in decades.

A Night in the Ukraine was a take off on the Marx Bros. Gah. I'm not a fan of the Marx Bros, the Three Stooges and slapstick in general. The first ten minutes confirmed my fears - but then Serge B Samovar, A Moscow Lawyer (aka Groucho) started letting those one liners fly - it just cracked me up. He even had a K1 P2 laugh! Even the Harpo character was pretty good.

Did I mention that Richard III was in an outdoor theater? Yes. COLD.

But yay! I wore my Uggs and at intermission, put on my nice long Log Cabin wool socks too, to the envy of a couple of people around me. I had toasty toes, at least.

I pretty much dropped all knitting to knit up a helmet (Knitters 2003, Fall, I think) after freezing by the end of the show. Sadly I didn't have quite enough yarn to finish it yesterday, so I ordered some more. Even more sadly, it looks like.....well, predigested food. Why do I knit with variegated colors/thickness when I know perfectly well I only like the way they look in the skein or knit in stockinette?

Even more sadly (Yes! more sadly than the last more sadly!) going through the blog pix I ran across a pic of piles of balls of yarn from my frogged shawl collar jacket....

Now I just need a size 8 circ that's 16 inches long. The pattern calls for a 24 inch circ but at 4 sts an inch and 72 stitches to cast on, I come up with 18 inches. It is VERY hard to circularly knit 18 inches on a 24 inch needle. (I faked it with the first one. I could probably fake it with the second, but clearly I need a size 8 16 inch circ.)

Still reading Paul Murray Kendall's Richard III, although I'm almost done. The play was such a contrast! Well, naturally, Shakespeare did write it in the realm of Richard III's usurper's granddaughter. But it was jarring at first. Let me just say, there is no way that a man who was in as many wars as Richard was, and successfully at that, was a hunchbacked cripple. He might have done away with his two nephews (the Princes in the Tower) but it's just as likely that Henry VII did, or even the Duke of Buckingham. Isn't that cool looking? Can you see the giant ball of twine in the tree? (all the pictures click bigger.) There was another one suspended over the pathway but it came out too blurry.

And now for the obligatory cat cheesecake 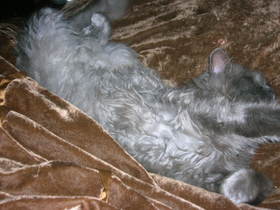 * I'll blame it on the play, but really, I shamelessly stole the joke from my brother. Hi Bryan! Thanks! ;)

OK, you salvaged our friendship by backtracking and admitting that you liked Groucho and Harpo (who's one of my all-time loves. . .)

OK. So cool you went to that play, Dick III is one nasty fellow.

So, I had to stare at Hez' photo awhile to figure out where her head was.

Oh, reconsider the Marx Brothers, please. They are more than mere slapstick. Groucho was a master at word play. I think he had a real love of the language, and I love watching their films just to listen to his patter.

You theatre maven, you! Your picture of Hez makes me want to rub her tummy. Is Hez a her?

Don't listen to Brigitte! A 16 inch is easy to handle. Much better than 4 or 5 sticks.

Live theater is so much fun. Glad ou got a chance to go. Hope you grow to like your helmet.

Carrie- I could live without the Stooges, but go and get A Night At The Opera on DVD, and tell me the Marx Brothers aren't funny!
Hez, such fluffy kittiness!

I never really got the Three Stooges, but I do love the Marx Brothers ...

Great kitty shot! Does she let you rub her belly? Ours roll over like that, and you'll go to pat their bellies, and come up with a bloody stump ...

Cultchah! Cutltchah! The theatah! How smashing! Richard sounds like it was cool, but yeah, I am with you on the Marx Brothers and 3 Stooges... my brothers used to kill themselves laughing, and I just didn't get what was funny.

What a great kitty shot! Like Bridget, one of ours will bloody you if you even get NEAR her belly. She is a freak. And listen, the way I see it, ANY mental picture of Johnny Dep is just fine with me.....unless...well...I better just leave it at that. ;0)

Diggin the ball of twine in the tree pic and of course the cat cheesecake shot as well.

I love the Stooges - right - I'm a little weird.

Great cheesecake and ball of twine - too cool.

I don't really like variegated yarn most of the time either...but some of my favorite yarns have a little bit of subtle color shifts, like Arauconia Nature Wool. love that.

Of course, I'm knitting with some variegated right now and having fun with it...but it's a tiny item and the colors aren't too glaring.

I love Cal Shakes! It does get cold though. Nothing better than Shakespeare outside though.

Shakespeare out of doors is one of the grand treats of summer... lots of good memories. We are trying to get a group up to Sand Harbor at Lake Tahoe this year. it's also fun to pull out the woolies..sorry about the yarn disasters, though.

I'm with you on the slapstick, but every once in awhile it will make me laugh...not very often.

Why is it that even though we have 100 needles in our needle stash that we never have that one size we need.

I envy your theatre attending! Cold in an outdoor theatre in California? Wow.. wouldn't have thought.

Hez looks fluffy as usual - fluffy enough to be mistaken for a squirmy pillow??

Any theater is good theater, even if it's bad. But COLD theater is hard to take - I'm always cold and can't stand it. But it sounds great!! Hez is adorable and tummy rub-able - sp? Anyway...
Stay warm!
:)

I just want to scratch that tummy!

ahhh, i miss the theater. Good or bad! There is nothing like that here, its alll sports! awww hez looks so fluffy and comfy aww!!

backtrack...wait, did I read right? When? did you frog that grey shawl collar jacket?
I know I've been sporadic in keeping up, but...did I really miss that much.

me too on just plain not getting the 3stooges humor.

Your theater outings sound just like fun though. Wish we had anything to compare.

You're putting me in the mood to go to the theater. I wonder if I can talk my husband into going . . . If it's a musical, even better!

I vote for DPNs. It's hard to find any 16 inch circs - and believe I have been looking!