Never Wordless. Even If I Ought To Be.

I'm trying to power through the Richard the Third biography before I see the play tomorrow night....it'll be close but definitely not enough time to reread the Shakespeare play too. Alas, I'll just have to go into it with only a slightly confused jumble of who's who. Historical royal figures need to be identified by, I don't know, bar codes? It can't be more confusing. I'm much better at the Tudor period than the War of Roses.

In the meantime, I've discovered David Rosenfelt's Andy Carpenter's mysteries, through Bookfool. Broke my reading slump. What's not to love about a man who saved both a dog and a man from Death Row? And just happens to be wildly wealthy. I read Open & Shut Saturday night (because my life is wild), went to the library on Sunday to pick up First Degree, the 2nd in the series (yes, my library is open for four hours on Sunday! Love my library!) finished it, but then halted the rapid progression to read the bio. I did however..... 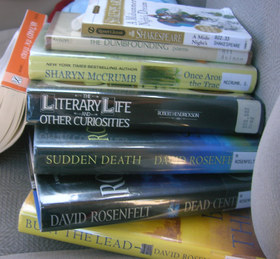 ...stop at the library yesterday. Never mind that I have library books at home, a book I'm not even halfway through and overflowing TBR shelves...... 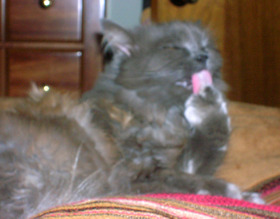 In knitting news, I can see why the Jaywalkers have been so dang popular! They're such a fun easy knit, for the other two people who have never knit the pattern. 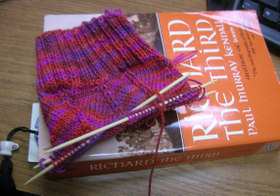 I love the way the Irving Park colorway is knitting up. The beaded socks are a little behind: 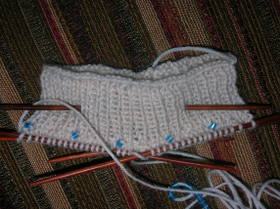 It turns out I should have probably had more of a plan. Do I knit the beads every other row? Every few rows? I was pretty much planning on making them slightly taller than ankle socks. I think I'll just wing it and see how it looks. There's always frogging. I am ridiculously in love with the Lantern Moon dpns. 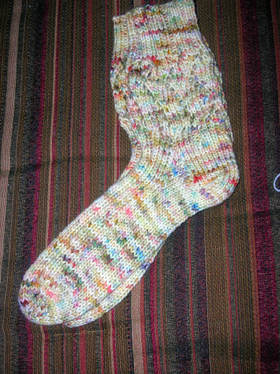 Both them. Done! All the other WIP's? Marinating. I am soclose to finishing GG but I just can't bring myself to pick her up. The cellphone cover continues to be a complete PITA. I don't want to give up either design detail but it's not working out. And w/o the one design, it's not even worth knitting.

Oh, and good TV news! It looks like Jericho just might get revived as a mid season replacement. Cast & crew need to sign on, but cross your fingers for me! I'd hate to give up TV right when The Closer, The Dead Zone, Eureka, Psych and Monk are all starting their new seasons.

I would space your beads out some...maybe every 3-4 rows? You don't want the socks to sag under the weight...Are you just adding them between two purls in k2p2 ribbing?

Hee hee - your life is wild like my life is wild. And H should do a better job at least PRETENDING to be interested!! ;)

Also, I heard somewhere on the intertubes that Jericho is being continued because people sent CBS nuts or something? That probably makes more sense to you than me...

Alert the media! Finished objects! You know I'm kidding, right? Who am I to say when I haven't finished anything for a long time.

Bar codes! What a brilliant idea. I wish I could use that so my students could tell Teddy from Franklin Roosevelt. I always emphasize that you have to keep your Roosevelts straight, but they never learn. Sigh.

I seem to be the only one, but I've always preferred Richard II to III.

Well, it's not like you can have too many books!!

Your library pile is even bigger than mine! Love the jaywalkers! And I'm the second to last person to knit a chevron!
Wooo hooo about Jericho, you made my day...guess CBS took note of the gazillion people who signed the petition (including yours truly).

You've been in a reading slump? You get more read in a slump then I have since grad school. Too many distractions, blogs, podcasts, knitting. I love the colorway of your Jaywalkers.

Carrie- At least your reading is somewhat cerebral- I would never admit to the dreck on my bedside table.
I was checking out how you do the beading- you thread them on the yarn?

Love your summer TV selections! My favorites too. They make summer tv worth watching!

I thought of you when I heard the Jericho news yesterday. :-)

Nice book haul! I did the same yesterday, just fewer books and no socks, finished or otherwise, so not the same after all! ;o)

Oh, thanks, I'm going to have to look at some of these books.

And - how did you know that I was one of the two people who hasn't knit Jaywalkers????

'The Literary Life and other Curiosities'? That looks interesting.

Oh yay on the socks!!! I can't remember what I finished last...

Um. So I haven't knit the Jaywalkers, although I do have the pattern.

What a great idea...reading a Richard III bio before seeing the play! I like that! I need to read some British history non-fiction since I teach several Shakespeare history plays. I can't ever keep Henry the IV, Part I straight with all the Henrys!

I'm another Jaywalker sock-knitting virgin :). Hez' adorable tongue matches the pink (throw? blanket?) in the photo! Your pile of books looks like you'll be busy. I've barely cracked into mine - I have no excuse!

When is Eureka on again? I LOVE that show!!
-adrienne:)

Wow you have been busy! With both the reading and the knitting. I tried the Jaywalker. It was a fun knit but I didn't like the way it fit my foot. So it went to the frog pond. Hmmm, I wonder if it would work for mitts....

Since you're not making the beaded socks very tall, doing a bead every p row would be fine, or if you want a bit of a pattern, do a bead every other row, every other column to make diamond shapes. Or do 2 p rows and then skip one then 2, skip one, 2 again. Play with the patterns a bit and, as you said, frogging is always an option.

Definitely looks like you've gotten the hang of where the beads go though! Looking good!

Ah Ha! I read some of Margret Avison's poems in college. I haven't thought of her for years.

Now I'll have to go get her books and read the ones that I haven't even seen yet.

But "The Dumbfounding" was an excellent start.