Home Archives Profile Subscribe
Marvelous Monday
Wouldn't It Be Easier to Just Run Away & Start Over?

Chunkster Challenge Wrap Up & the 4th of July

Firstly, looks what Felicia at Fluffy Flowers sent me!!

Secondly, watch Jericho tonight on CBS at 9pm. Write in how much you love it. Lie if you have to. 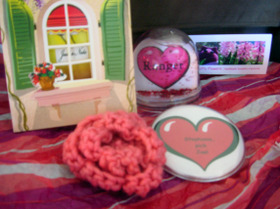 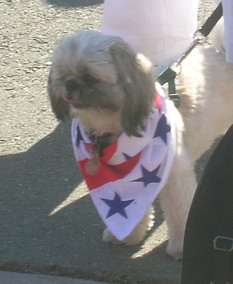 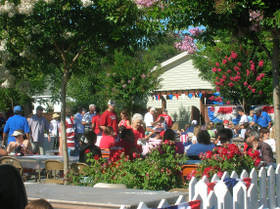 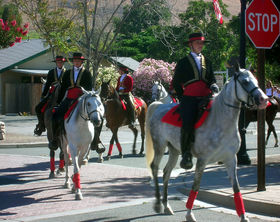 Okay, clearly Typepad is not going to let me type between pictures. Grr. Check out all that patriotic spirit! I'm thinking there might be a red, white and blue theme......

Red hot at least. Adrienne and I made it to the pancake breakfast by 9am, lived through the line, waited the fifteen minutes for the parade to start on time at 10am - fifteen minutes after 10am when the parade still hadn't started we bailed for Peet's and an iced coffee. It was 92 degrees already. Yowza.

In knitting news - well, there is much culling in the land of Carrie K as the interiors of the house are getting painted and I'm taking advantage of it by redoing practically everything that I'm not relocating. Oh! I heaved the Norwegian socks after eight years of UFO-ness with one sock finished and the other to the heel flap because, well because I used Wool Ease before I knew any better. Oddly enough, I'm not even the slightest twinge of guilt. In fact, I feel relief. Now I can make them in decent yarn that doesn't squeak.

I like my yarn to speak to me, but I prefer it a bit more metaphorically.

For the Chunkster Challenge I originally chose only Madwoman in the Attic to read but once I designated that book as my one Chunkster Challenge book, naturally I immediately stopped reading it. I did read Jim Butcher's Grave Perils (678 pages), Arthur Quinn's A New World: An Epic of Colonial America from the Founding of Jamestown to the Fall of Quebec (532 pages), the ever popular (this is what? the 4th challenge its fulfilled? Righteous.) Richard the Third by Paul Murray Kendall (602 pages), Blind Assassin by Margaret Atwood (521 pages). They were chosen using the scientific method by checking my Books Read Excel sheet for books that fell in the time frame of the challenge and were over 500 pages.

Did I mention that you should watch Jericho tonight at 9pm on CBS? Naturally the new season of Dr Who starts on the Sci Fi channel at 8pm with a two hour episode.

My new favorite Online Dictionary, Your Dictionary. That's the word of the day. The email is more descriptive. I like that I can hear the pronunciation as I tend pronounce phonetically, as opposed to correctly.

That dictionary is cool. I can't pronounce anything. I am used to seeing words as I read them, but not used to saying them or hearing them.

Wow, you made it to the Pancake Breakfast! I am totally impressed. I exercised my right as an American to sleep in. I got my Z's, but you got the pancakes and the knowledge that you supported your community. Good move on tossing the socks - squeaky yarn sucks.

Well, crap. I missed the first Dr. Who of the season. I should really pay more attention to these things.

Hee hee - I like that Grave Perils was the heftiest book - and probably the fastest to read! :)

92 degrees? You people are crazy!

Where are the before and after pics? I just want to know what I missed out on during that period when I was not knitting!

Luckily I checked bloglines at 9:05 EDT, just in the nick of time to flip over from a movie to record Jericho. I missed a few before I realized how good it was, so I'm glad they're running them.

We've had fabulously cool weather this week, but your 92 is headed our way apparently. Yuck.

I saw your post on Bron's blog. I live in the Central Valley, I see you live in the East Bay, so we are neighbors. Just thought I would say, "hi."

My husband watched Dr. Who. I'm still missing the old series and Sylvester McCoy as the Dr. (He was the last one and was the Dr. at the beginning of the Dr. Who movie). I was glad to see, as I walked through the living room, that it appeared to be a lot "campier" than the movie was. I think the lack of campiness is why I didn't like the movie. Dr. Who isn't supposed to be "slick" it's supposed to be just strange.

Ohhh, thanks for the book titles. I'll have to look into the history one. Heading off to the online library catalog.

So. Watched Jericho last night. Watching Jericho tonight. I think we need to start throwing subliminal Jericho messages in our blogs... You know, like, "so I'm knitting this tank top out of *Jericho* silk, and it has no *Jerichowatchit* shape...".
Aaaa...good one, huh?!

Thanks for the dictionary link --- very nice.

And, your gifts are lovely!

Great package! Totally missed Jericho, but didn't know it. Sadly, I missed most of Doctor Who and was well aware of it but had NO CHOICE as company was over with no chance of them leaving in time, or watching it with me :(. Gotta be on the lookout for a possible re-run of it. David Tennant - yum.
:)

Re: Madwoman -- I'm going to start it in the fall. Maybe we can play together?

I'll have to pick up on Jericho online -- but it's been such a long time and I'm so busy now! So, WoolEase isn't a philosopher? It taught me a lot, except it speaks like Confucious, on his mediocre days ;) j/k

Man, I'm glad we didn't go to the parade. It was miserable outside that day!

I'll admit it- I've never seen Jericho.
Throw out those UFO's- They're bad knitting karma. There's no room for guilt in knitting!

I so love Jericho! Glad they are running it for those who missed out. What is the full title of the book you like so well...The Mystery of...? Thanks!

8 years - they should either have been burnt, or framed!

And I'm sure I would love Jericho, if I got it in the UK. (But the new series of Dr Who - enjoy.)

So glad you enjoyed your treasures! I grew up watching the Tom Baker episodes of Dr. Who and loved them. I haven't made time to see the new episodes yet.

Oooh - Dr Who is really awesome - I won't give anything away...

Regarding pronunciation, you are FAR from the only person who does this. Conversations between me and CB are usually interrupted by one or the other of us correcting each others pronunciation. Because we read so much, we talk about things the way we hear them in our heads, which often differs and is never correct.