Are You More Cat or Dog?

Stolen from Not Pretty To Watch....by the way, I'm not set on getting my way, I'm just unclear on the art of compromise.

Books: For the sake of simplicity and to help me keep the reviews and challenges straight, I'm just going to list the books I read during the month at the end of each month (or possibly at the beginning of the following month. It's July 2nd, right? Huh.). Also that way I'm not as aware that I can tear through three David Rosenfelt novels in so many days but it takes me three weeks to read Richard the Third.

Read in June: Open & Shut, First Degree and Bury the Lead by David Rosenfelt. I thoroughly enjoyed these books and there are two more waiting for me at home. Andy Carpenter is a defense attorney. He takes cases only when he thinks his client isn't guilty - eventually - and he has an unusual team to help him. A former client he freed from death row, a lawyer that can't handle the guilt of being a prosecutor or a defense attorney and in consequence, runs the Lawdromat, an ex cop turned private eye and my favorite of all, Tara, The Most Wonderful Dog in the World. I give them all an A even though the frame up plotline is starting to wear a bit thin.

(I've also decided to simplify my rating system, I think most people grasp A, B, C, D & F. Okay, I do. This is just a whole lot easier than the fiber/decimal system I was attempting.)

Richard the Third (1955) by Paul Murray Kendall and Princes in the Tower by Alison Weir are my June Non Fiction Five Challenge books. Richard also qualifies for the Reading Through The Decades challenge. (Oooh! Oooh! It's also a 2007 TBR book! Trifecta!) I really liked Paul Murray Kendall's restoration of Richard the Third's reputation. He made a good case that a great deal of the evidence against him was manufactured by Henry VII who followed him on the throne. Sadly Alison Weir shattered that feeling in her book, Princes in the Tower. I'm still not a Henry VII fan, but I'm interested in reading more about Elizabeth Woodville now. What was that woman thinking? I'd read the bio to prepare for the play, Richard III at Cal Shakes and boy howdy, Shakespeare definitely took the Tudor road. I know, oddly enough. I give both books A's.

Pride of Kings by Judith Tarr was for the Once Upon A Time Challenge. It  follows the first Richard and his brother John in their travails for the Crown of England and Brittany. No, they're not the same crown. Not even the same realm. It was a nice surprise to pick up another Plantagenet protagonist novel by happenstance.  Theme! A

A Midsummer's Night's Dream by William Shakespeare. I listened to the audiotape so I could finish my quest more or less in time and really enjoyed the experience. I actually followed the story (it helps that I know it) but normally I tend to zone out during audiotapes. It was the play version, so it was lovely to hear it spoken by the actors. Also for the Once Upon A Time Challenge.

The Literary Life and Other Curiosities by Robert Hendrickson was interesting, but not what I was expecting. (Judging a book by the cover as I did.) It's basically anecdotes, which were interesting, but hard to keep reading continuously. I made it about halfway through the book before I put it down. (Also? Anecdotes are easy to read continuously. Just not 800 pages of them). B+ (pts off for fooling me).

This Is Not Chick LIt edited by Elizabeth Merrick. There were a few good stories in there although mostly I found them odd. A Ted Bundy-like character who gets caught up with an FBI made robot who's creator is in love with her. Joan of Arc as seen as a reality show. I think it's a sad commentary that stories have to proclaim they're not chick lit if they're written by women but I've noticed that for all the talk about stereotypes or prejudice, the first thing that happens is the Naming and  the Categorizing. Probably a human condition. B

A Disorder Peculiar to the Country by Ken Kalfus, I give an A. What a dysfunctional couple! Since they're divorcing, not too surprising. I just had to read the book when I read the back blurb: Marshall goes to work in the World Trade Center; Joyce has booked a flight out of Newark. On that grim day, when their city is overcome by grief and shock, each thinks the other is dead, and each is visited by an intense, secret, guilty satisfaction. The book is never quite what I thought it would be and I didn't care much for anyone in it, but in itself, a pretty fascinating slice of literary metaphor.

For the knitting crowd: this is two of the bins. 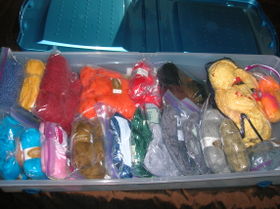 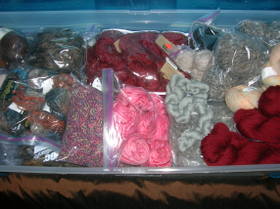 Have you shown your quiz results to Hez???

Wow, you got a lot of reading accomplished! I may have to take a look at a couple of those, they sound interesting.

Hmm, I only got 80% cat! Oh no... A Disorder Pecular to the Country sounds intriguing.

Your yarn stash is beautiful!! I am envious!

Heh, you even have it colour coordinated! Now that's worse than me... Hey, I believe I spy some Knitpicks in the same shade of blue that I have - Chambray, I think?

Pride of Kings sounds like a pick up book for me!

I'm only 70% cat! This is what happens when you marry a dog person.

That's a good way to store yarn so it stays organized. I love having mine in an open bookshelf, but it's probably time to put it in nice, safe bins.

You have a tiny stash!

Ooo, pretty yarn! I'll take the ones in the second bin ;-) I hope that's not all!

So you're keeping the yarn in the plastic? Is that working well?

You call that a stash? This is a stash:
http://mochimochiland.com/weblog/?p=111
(not mine, thank FSM)

There is something wrong with that quiz -- it said I am 50% each cat and dog. Hummph. I need to find my inner kat and let it out to play more often.

That's the most organized stash I have ever seen.

You are ORGANIZED, my friend! I must take that quiz :)! If only my stash could be tamed by plastic bags and bins...sigh...

Those books sound good - thanks for the reviews and ratings!
:)

Glad you are 90% cat or Hez would have to disown you.

Carrie- Hez will be proud of you.

Thanks for the stash flash- You shameless girl!

I'll have to check out that cat/dog quiz. Hez must be proud.

You had quite a reading month! I'm hoping to get my hands on the second David Rosenfelt book, soon. Hope, hope. Someone offered me a copy at Paperback Swap, but I was down to one point and worried that something more important might come up. And, then, the credit fairy gave me 5 points, after I turned it down. Darn. I'm glad you're still enjoying them. I tend to space out series books, so I won't get sick of the same old plot line.

I'll have to check out that cat/dog quiz. Hez must be proud.

You had quite a reading month! I'm hoping to get my hands on the second David Rosenfelt book, soon. Hope, hope. Someone offered me a copy at Paperback Swap, but I was down to one point and worried that something more important might come up. And, then, the credit fairy gave me 5 points, after I turned it down. Darn. I'm glad you're still enjoying them. I tend to space out series books, so I won't get sick of the same old plot line.

You have so many challenges going on! I'm having a hard time keeping track of mine. Some computery person should make something simple that allows people to put their challenges in the sidebar as easily as a blogroll.

With anthologies and anecdotal type books, I like to limit myself to one or two stories a day otherwise, I get burnt out.

Hmmm, I'd consider myself more of a dog person, but evidently my personality is only 30% dog...

You and I are the same type of creature... (I just wonder where the 10% dog came from.)

Wow what a stash you have! No wonder Hez approves so highly of you ;) yarn and 90% cat!

oh lordy, look at all that yarn, in those beautiful, shiny bins...

I cold of told you that you are 90% CAT, I think most of us knitter are! We lay around all day & play with yarn!

Might fine stash. Meow! Btw...extra gift is still in the works, I had a minor material set back.

I always seem to get around to reading the book reviews people write several days after I make the bookstore run. Sheesh! I'll see if I can remember any of this for the next time that I go.

I also now remember that I was going to pick up storage bins this week. (and didn't...) Although I doubt my stash would look that organized even if I did!