Jen of JenLa got one for her birthday and I immediately wanted one too. So I ordered a Jordana Paige satchel for my birthday and it came the very next day! I tried to artistically arrange it so you could also see the sleeve progress on GG and minimize the paper towel roll in the background. Lovely. It's perfect. I can fit a book and a project in it and everything else. I might have to register it as a lethal weapon, but that's true of all my purses. 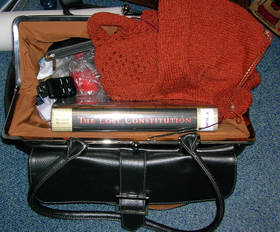 This is what my brother sent me. Hezekiah was really cute with it. She was doing her "questing paw" at it but couldn't quite reach the shelf. Later that night she managed to get up close enough to check it out. I'd post the pix I took but since they all came out as black sheets, I thought I wouldn't bother. Bad camera. (I'm never going to admit it's me). 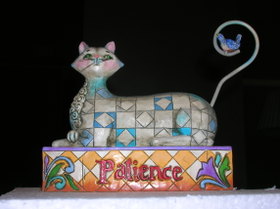 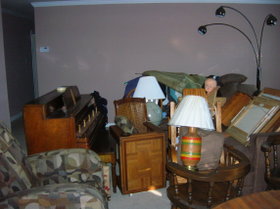 This is a before and after shot of the living room.... what is that draped over the easy chair? Huh.

Saw Pierre Marivaux's Triumph of Love at Cal Shakes last night. Great cast, mean spirited play that sells itself as a fairy tale. A princess falls in love with the true heir to her throne (her uncle usurped it & died, her father then inherited it and from him, she did) who has been spirited away as a child and raised to hate her. On the path to marrying him and restoring him to the throne (I wonder if he'd been ugly or didn't want her, she'd've still handed it over) she seduces the couple (brother/sister) that have raised him, more or less to buy time to seduce him. I've got to read the play.

I also picked up a lariat necklace from CraftyLily that I showed off to all the knitters sans projects at the play last night. I was KIPping. I'm going pretty good on the knit on sleeve, just cross your fingers that it fits. 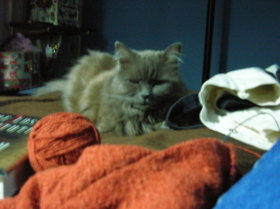 "You want me to do what with the yarn?"

Nice bag! How does it compare to the other one you bought in March ;-)

I know all about purses being lethal weapons. LOL That's a great bag.

Very nice bag! That play sounds like a total trip. Hee hee - I don't think you're going to get H anywhere near that yarn. Consider it a blessing!

You know I love the bag! Is hez feeling well? Lol. A catchenal disinterest in yarn is always... scary.

Carrie- I seriously covet that satchel- I'm a fellow handbag freak.
You could be Emma Peel with that bag!

Cool bag! Sounds like you have been busy. The before and after living room shots are great - I love seeing that kind of thing.

Hez looks, um, perturbed that you dared to take her photo ...

Wow, lucky girl! That bag is great! Heh, Hez looks like a statue in that photo. When do we see a complete photo of GG?!

Loving the bag. And it came in one day?? Remarkable.

I have one of those "patchwork" figures: a lion and a lamb. They're all so pretty. Though not as pretty as Hez.

That's a lovely bag! Glad to see your lounge is all sorted out - I bet Hez is happier!

What a fantastic bag, and I can't believe it arrived so quickly!

Brave, brave soul...showing before and after. You inspire me to be a more open and sharing person. LOL That back is great! Will it also stay that organized?

Brave, brave soul...showing before and after. You inspire me to be a more open and sharing person. LOL That back is great! Will it also stay that organized?

Late happy birthday to you, as well.

I read the two articles about Triumph of Love from the SJ Mercury News. The Aug 12 preview seemed to want to give them at least a fair shake (heh heh), if not a positive write up.

The Aug 15 review by the same author was at least mixed if not negative. Okay, "just misses the mark" is negative.

All this to say I'm not sure reading the play will answer your questions, unless you read the original French language play and create your own adaptation in your head.

According to the Aug 12 article, previous adaptations based on Stephen Wadsworth's script have been more romantic comedy, and this adaptation is based on a different translation with a romantic complexity bent.

I notice that the Aug 13 SF Chronicle feels that this version of Triumph "hasn't quite matured"--so even though it's a much more positively worded review, it still finds the performance if not the adaptation itself flawed.

But of course, now I'll go look for somebody's translation and try to see what I think.
;-)

I love that bag! I'm glad to see you are making the most of your birthday!

Your comment was too funny because my Hubster always said he had the receipt for me and when I hit 40 he was going to return me for two 20's! That was 6 years ago, I guess I have nothing to fear.

I have to say...the living room is looking pretty good. Especially when you see the "before".

Great satchel! I tried to switch to smaller purses one time. Complete folly. I love your before and after pictures. That chair looks very inviting.

love the JP bag, and the comfy chair.

Aren't they great?? I bought myself a purple one last month!

I love it! Is it leather?? I got one of her first designs and loved it. It was fabric though. I wished it had been leather.

What an excellent bag :)

Everything is wonderful, including Her Imperious Hez, who has no need of yarn at the moment. Great bag:)! Happy Birthday!!

I love Jordana Paige. I was thisclose to ordering the satchel, but ended up with the messenger bag. Which I love.

HAPPY BIRTHDAY! That satchel is divine. I want it, I need it, I must have it. Good thing my birthday is only a month away!!!