Home Archives Profile Subscribe
Aprons, A Horrid Seamline, & A Month of Booking Through Thursday
All TV All the Time. Except When it's Knitting or Reading

I Continue To Start And Never, Ever Finish 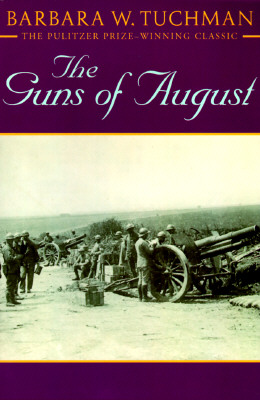 You're The Guns of August!
by Barbara Tuchman
Though you're interested in war, what you really want to know is what causes war. You're out to expose imperialism, militarism, and nationalism for what they really are. Nevertheless, you're always living in the past and have a hard time dealing with what's going on today. You're also far more focused on Europe than anywhere else in the world. A fitting motto for you might be "Guns do kill, but so can diplomats."
Take the Book Quiz at the Blue Pyramid.

Hmm. That sounds sort of like me. Except for the interest in war, imperialism, militarism and interest in Europe. It is however, a great title. And calendar appropriate! 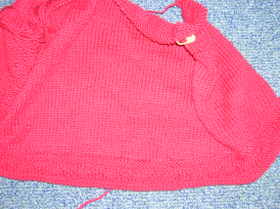 Wow. In no way is that yarn that blindingly bright. It's a lovely muted red in Rowan Wool Cotton and the pattern is  Elizabeth I from Tudor Roses. (Golden Gate is on a time out.) I took it with me when I went with my mother for her temporal artery biopsy (she has, presumably, temporal arteritis) but because she's on Plavix for her stents last May, predisone for the temporal arteritis for the last 3 weeks and the surgeon didn't think the biopsy was all that conclusive to begin with, she didn't have the biopsy. I'm happy about that. I was worried, as I could clearly see when I got home and realized that my gauge tightened up considerably while we were in the waiting room. Hopefully it's not going to skew the piece because I am not reknitting it.

There was a widely bruited-about statistic reported last week, stating that 1 in 4 Americans did not read a single book last year. Clearly, we don’t fall into that category, but . . . how many of our friends do? Do you have friends/family who read as much as you do? Or are you the only person you know who has a serious reading habit?

Hmm. One of my girlfriends will read anything anyone gives her - she apologizes that it's fluff, but considering her life, she needs the fluff. My brother & sister in law probably read more than I do. My parents read (my dad has his books stashed in the medicine cabinet). I think most read at least one book last year, if not considerably more.

Look what I won from Bridget! 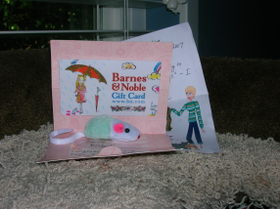 Posted at 12:20 PM in Booking Through Thursday, Elizabeth I | Permalink | Comments (21)

Hi, my name is kmkat, and I am doing my very level best to make up for those who don't read books. Thanks for the book quiz link and introducing me to "bruited about."

Wonderful prize - Sally cat used to LOVE those mice to death. Hope that gauge works out for you, it can really do odd things to flat items, and yours is a shaped garment!

Gee, I'm a little worried - I took the book quiz, and got one of those "Page cannot be displayed" screens - does that mean I'm a dirty book or something???

Enjoy your winnings - hey that's a pretty good picture of them!

Hey, you've made really good progress on Liz! I'm glad everything went well with your Mom.

I still can't get over that there are actually people who don't read...

Congrats on your gifties!

I am so off to take the book quiz. Where do you find all this amazing stuff?

I have a scarf on my needles with Rowan merino/cotton blend in red!

Congrats! Always fun to win goodies. Sending good thoughts to your mom. Maybe you need a special sock that you're knitting on too-large needles for waiting room knitting...

Glad to hear your Mum is doing okay (if it's okay to be inconclusive, of course) - my thoughts are with her!

I am known as "bookish" in my family, though everyone reads a lot, apparently I read a bit more, hence the adjective... I am also known for leaving trails of books around the house... i.e. reading more than one at a time, AND (back away if you are squeamish) I am known to leave my books open and face down. (it horrifies my sister who likes never to "break" a spine).

I just heard that statistic too, and I find myself looking at strangers, no longer wondering as much if they wash their hands when leaving the bathroom, but now more strongly wondering, "do they read?"

Who are these people who don't read a book in a year? Weird.

Hope your mom's feeling better. I've had to take prednisone before and it totally messed with my sleep.

Whatcha gonna get with your B&N gift card? A knitting book, perhaps?

Thanks for the kind words...And I do know that....just had to get it out there...lol

I am off to take your book quiz now.

I wander into the library and rent books at random. Total fluff or history, I don't care =) My whole family is this way, though, which I think is a gift.

Carrie- I've actually seriously considered getting rid of the TV, the stuff is dreck. Give me a good book any day.
Hope your mom is better. Can't wait to see your progress on Liz, she's in my to-do list.

Good luck to your mother.

Funny how gauge seems to change inside and out of waiting rooms. Mine does the same thing. :)

Reading? I used to read a lot. But ever since law school, I don't read for fun anymore more except for my annual reading of the Chronicles of Narnia and The Phantom Tollbooth.

Oh, that's an interesting book to "be". I love reading war memoirs - wonder what you did got get that kind of answer.

Super cool - a book card and a mouse!! What could be more fun?

Fluff is excellent- and just so right when you need to escape from your life worries.

Me? I just read this neat book- The Stiff by Roach. Well, not exactly fluff but a fun read.

Wow Liz is back? I am through the back and that is it...man, I nearly forgot about her. That is a very bright muted red....heeheee I have been conversing with Bev,wink