Bold the titles you’ve read. Italicize the titles you own but haven’t read.   Put an * next to the books you've read more than once.

Hmm. There were supposedly 106 on this list. I wonder which 3 were inadvertently dropped? 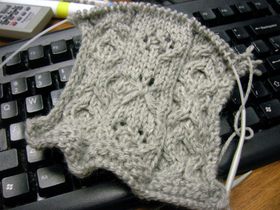 This is my Hugs For Snickers scarf so far - I had to knit it in gray because of Sheba & Hezekiah but at least I didn't get the dark gray - the cable detailing wouldn't show up at all. Pretty, yes? The Cascade 220 is surprisingly soft too. 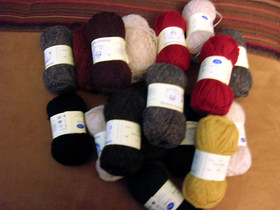 Jamiesons! What, you were thinking it might by Mary Tudor? ;) Maybe next week. The Yarn Boutique (one of my LYS) has started to stock it. These are earmarked for Latvian Mittens & scarves, mostly.

I've decided to knit willy-nilly on whatever I want when I want, which is not so surprisingly close to what I do anyway. Just stop me from joining any more KAL's in 2008 because that seems to be the kiss of death of a project- more so than the , well, never mind. I'll sort out the blame later. (Yarn. Pattern. Designer. Cat. Possibly operator error.)

As for TV - watch Friday Night Light's tonight at 9pm on NBC if only to keep Chuck & Elspeth happy, although I'm going to be checking out The Women's Murder Club on ABC w/Angie Harmon. Stargate Atlantis is on at 10pm and they'll have to go a long way to lose me, but considering they've killed off Carson, brought back the Replicators and Sam is going to Atlantis and not Daniel, they might be working on it. As long as the O'ri don't show up, I can deal. I think.

So far my TV schedule includes: Brothers & Sisters on Sunday nights. Journeyman  on Mondays (I'm watching Heroes, but I'll be a lot happier when the set up is done and the action starts. Suspense has the opposite effect I think it's intended to have on me. It's supposed to pique interest but it makes me not care.) Tuesdays is Bones and NCIS and House and The Reaper (even if I have not technically watched a single episode of it. Yet.), Wednesday is The Bionic Woman (Katee Sackhoff really better be a regular) and CSI NY and Thursday is 30 Rock and Law & Order CI.

I wish Law & Order: The Original would come back on. It's not even scheduled to premiere until 2008. 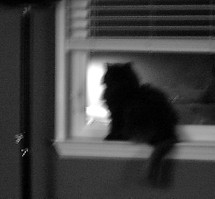 Hezekiah says; "I wanted to be a housecat? I did not. Let me out! I'm a wild creature of the night! Well, okay. Treats and three fourths of the bed? Sold."

Have you watched "Life" on NBC Wednesdays yet? It's really good too. So is "Chuck" on Mondays on NBC.

The first step is admitting you have a problem Deb.......

What? I can't believe you haven't read Anna Karenina! I think it was required reading when I was in high school.

There's enough Jamieson's there for a sweater! What sort of mittens or scarf is that? If you need more colours, Puh-leeze ask me. I have so much leftovers I know I will never use!

Consider this your invitation ... after the front & neck bands, I have 8 sleeves to do!

You should read The Time Traveler's Wife. Have tissues handy.

Love the Shetland! I've been toying with buying one of every color. So, I can play with all the colors.

I love the Law and Order: The original. I may just have to stop at the video store and rent a couple seasons and get some knitting done.

BTW, thanks for the reminder on watching the Women's Murder Club.

Your Snicker's Scarf it turning out lovely!

I'm with you on Heroes. I'm totally in love with Journeyman.

Jury is still out on Reaper and Chuck, and I'm not sold on Bionic Woman. Starbuck needs to go back to Galactica where she belongs!

Pretty scarf pattern. I really wish my LYS would carry Jamieson's. I second the suggestion about Life. It's quirky.

Lookie! A new version of the list. With books I've never heard of on it.
I'm resisting the urge to take this one... for now.

There is no way I've read more of these books than you. I totally blame Ms. H. for slowing down your reading with her cuteness.

There is no way I've read more of these books than you. I totally blame Ms. H. for slowing down your reading with her cuteness.

I am so with you on the Confedracy of Dunces. I keep thinking I'll figure it ou only if I make it to the end!

Glad to see Hez is boss!

I'm quite excited to see what you end up knitting :)

Yep, I have to join the general concensus on Confederacy of Dunces. My husband loves it, I loathed it and couldn't finish it. I'll bet one of the books that was dropped was Austin's Persuasion, since all the other Austins are present and accounted for. Persuasion is my personal favorite :)

What a fun list of books to look through! Reminds of the ones I've meant to read... I'm with you on Bones; that and House are two I make a point of watching.

So, am I to assume you will be heading over to Marianne's for some more Jamiesons this week at her sale? Hmmmm?

A translated version of a Clockwork Orange? Doesn't that kind of take the point away? never made it through Ayn Rand? I admit her endings really display her Hollywood script writing skills:

No not the electric nipple shock! Oh Howard are you all right??***CV

Your scarf is turning out really nice! Also, add 1000 White Women to your list along with Fingerprints of the Gods and a good biography about Abigail Adams. There, you have 106!

Your scarf is turning out really nice! Also, add 1000 White Women to your list along with Fingerprints of the Gods and a good biography about Abigail Adams. There, you have 106!

It's nice to see that Hez has her priorities straight.

First of all, I love your scarf - it's looking so good.

I will have to watch the Woman's Murder Club this next Friday. Thanks for letting us know about it.

OK. Dude. You HAVE to read Memoirs of a Geisha. Forget the movie, doesn't do the book justice. It's a wonderful book.

I loved the Kite Runner as well...

Carrie- A list like that would require organization far beyond what I am capable of.
Hez drives a hard bargain!

So, which was it with 'Atlas Shrugged'? Was it 'couldn't finish it' or 'couldn't stand it'?

I finished it, and can't figure out why I bothered.

Ow. My head hurts just LOOKING at the list of books you've read. Good on ya =) And your detailing on the scarf is beautiful.

I was reading that list of books, and I don't think I've read more than a few of them! The Iliad, Brave New World, and Memoirs of a Geisha. Oh, and Wuthering Heights, but I really don't remember it. Yep. That's it. I'm not very well read, I see!