The Unending Mitten & the iPod Meme

After you read this meme, you have to do it, too. (So, not stolen. Tagged. By A Fistful of Stitches)

If your life were a soundtrack, what would the music be?

Here’s how it works:
1. open your library (iTunes, winamp, media player, iPod)
2. put it on shuffle
3. press play
4. for every section, type the song that’s playing
5. next section — press the next button
6. don’t lie and try to pretend you’re cool

Should've Been a Cowboy by Toby Keith (when this song came out I hated it. Hated it! They were make believe movie cowboys! But you know, I should've been.)

Beer For My Horses Toby Keith and Willie Nelson (No way. Beer? Yuck.)

Superman (It's Not Easy) Five For Fighting (?? I didn't even go to the prom. Bad shuffle)

I Love A Rainy Night Eddie Rabbit. (I do and it is)

You'll Never Find Another Love Like Mine - Lou Rawls

One For My Baby - Frank Sinatra. Seems fairly appropriate (other than my childless state) until you realize the other half of the song is "and one more for the road")

In The Air Tonight - Genesis (I think I like Theme music)

Hallelujah by Jeff Buckley. Oh, I could not have picked a song I'd like better. The Second Mitten! Huzzah! Doesn't it look innocent lying there? The deceptive thing. I had to redo it four mittens over. First, my normal inability to count messed up the chart set up pattern and now I'm working on my fourth try finishing it off. 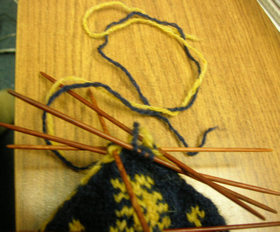 I think. I know I tried to do that "Loop The Live Stitches Through With A Crochet Hook" trick when I had something like.....fourteen live stitches left. Uh, too many. Rip back.

Then I completely disregarded the pattern because at that point, easy! Who needs to look at a pattern? Yeah, easy to get the pattern completely wrong. Rip.

Next I bound it off, in pattern, right amount of stitches.......except for those two stitches a few rows down gaily hanging out waving at each other. I have no idea how I can drop stitches and NOT NOTICE for rows and rows. No picture, darn it. I ripped it back (somewhat savagely) before I thought of taking one.

I'm trying not to think about how much I like the rounded mitten top better. And see? Whole, unharmed dpn's! So far. [darkly].

Not to mention, I was a wee bit worried about running out of yarn - I still have to knit the thumbs you know. Who WHO is following me around stealing my skeins? I don't buy single skeins. Ever. EVER. 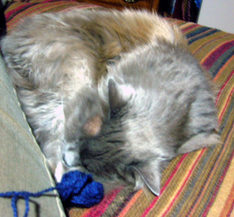 Hez sez: "I'm guarding this skein with my life. See? [zzzzzz]Don't be such a worrywart. There's more than enough here to finish the mitten and knit the two thumbs! [aside] If you have cat thumbs like me."

Hey, I've actually done a version of that meme: http://www.stumblingoverchaos.com/?page_id=321

Fine, I'll bite. I'm doing the meme as we speak.

Cat thumbs - love it! I'll consider the meme. Maybe do a test meme - see just how pathetic I am.
:)

that meme looks fun. i just might do it and i rarely indulge in meme's. :)

sorry to hear of your mitten woes and i hope you have enough yarn for the thumbs!

That is such a fun meme. Maybe I should play sometime. I'm kind of afraid of what I might come up with. :-)

I must be the only person without an iTunes, winamp, media player or iPod!

Guess you won't be wearing MaryT to Christmas mass, eh?

Carrie- A person's choice of music can tell alot about them- but I'm not sure what.
Those are great mitts, eh Hez?

And don't let Hez fool you --- snapping into action is her middle name.

Hallelujah! would be my closing credits, too - but I might choose Rufus Wainwright's version... (My iPod-type machine only has Jethro Tull's Divinities on it right now, so I can't really play.)

Don't worry; I'll admit to having the Captain and Tenille on my ipod. Love Will Keep Us Together, baby. I'll try the meme tonight; should be very interesting.

Your mitten does look all lovely and innocent laying there. Who would know it was such a problem child?!

I take some pleasure in knowing that I am not alone in having a battle lately with mittens.

But you have motivated me to post a picture later of my in progress/in need of help mitten and seek advice from fellow bloggers.

Oh man, some of those songs were perfect. I don't have Captain and Tennille on my Mp3 player but I totally should. You have some ABBA, right? Please tell me you do.

So, mittens are fighting knitters these days. How unpleasant. What do we do to whip them into shape?

Gorgeous mittens! That whole process of knit, frog, again -- sounds like my knitting. They are definitely beautiful now, though.

most excellent meme luck! and although I do indeed have Captain and Tennille, it was the Eddie Rabbitt I did a double take on. Nice! And I LOVE that Jeff Buckley song, I am super jealous of your soundtrack. Not so jealous of your luck with the mittens.

Heh...you certainly have eclectic tastes! Do those with MP3's get to play along too?

I love those mitts - the colours are perfect together. Mitten thumbs. Suck.

YAY, the second mitten! and after all the personal pain and suffering, SO worth it... have to get that book... love those mittens

Oh I just love Jeff Buckley too, what a voice and a terrible ending:(

That mitten looks great! And I'm struggling with a simple not pattern one. Fear not kitty with safe guard for you.

Love the meme. Unfortunately I have all the itrip stations on my ipod and shuffle inevitably brings them up constantly. I need to get them off.......

What a fun meme! Alas, all that's on my iPod is (ahem) knitting podcasts and two audiobooks. Am I a loser?

The mittens are gorgeous -- isn't it great that all the ripped attempts just don't show in the perfect finished product? Good luck with thumbs!

That second mitten photo, with the dpns going every which way, is truly frightening. Mitten is nice, though.

I took you up on the meme. iTunes was already playing :)

Some of those hits on your ipod were perfect!! It's like the ipod knew!!!

The one that cracked me up though is First Day of School: Beer for Horses.

I have books on my ipod right now, so I guess it wouldn't work.

Glad you got through the mitten trials! It looks fantastic. : )

Remind me again why I read your blog? to get memes? to get tagged without even trying? must be it.
LOL
love the meme.
And no, I have no Captain & Tennille on my iPod. All my C&T's were on vinyl and I've not gotten digital copies.
Muskrat Love, baby....

Hey, there!!! Looks like we knit the same. I have so many sets with less than I started. Uh. Do I learn to knit loose? No. I LOVE the mittens. Gor-geee-ous! Theme tree? How about a theme fireplace mantel....with no theme? Does that count?