Mittens! We have Selbuvotter Mittens 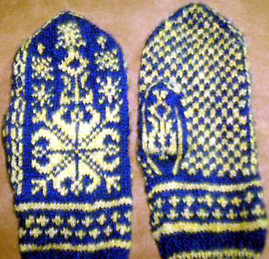 As in a whole pair. Two. More or less matching even, more or less knitted as charted. They're still not quite dry from the soak & block the other night and they fit on the big side, but considering it's a man's medium or a woman's large, hardly surprising. And now I can't decide which pair to knit next. Latvian? Another Selbuvotter? Convertible mittens? Gloves?

I used not quite one skein of the yellow and a little more than a skein of the (and it's dark) blue of Jamieson's Shetland Sprindrift (25 grams/105 meters), size 2 dpn's. The pattern is from Terri Shea's Selbuvotter, Annemor #13. I changed the cuff pattern because I wasn't crazy about the original one.

Between deciding which mitten to cast on next (or which WIP to work on) I cast on another Ribbon Scarf from Handknit Holidays, partly to use some yarn, partly to have something to knit in continuing ed tomorrow and partly to practice this: 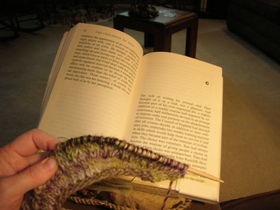 Is this bookstand not completely awesome? Chris sent it to me. And it actually works! It works with a large print hardback book (Children of Men, in case you're wondering) and endless stockinette best so far, but then there's that pesky learning curve. Oh, she sent me more goodies - two special CD's mixes - Coffee and Cat themed (it's enriching my iTunes - and Apple immensely, the ones I can find on it, mind you), a sheepie pez dispenser you have to see...which you can't yet, because naturally I don't the picture of it. I had a better picture of the stand too - I thought. It's not as precariously perched there as it looks.

Actually, with my fabulous photographic skills, it looks like the book is suspended in mid air. Can you even see what's holding the book up? Under the yarn. Okay, better pix of it coming. But thank you, Chris! I love it. I'm pretty sure the yarn I'm knitting the scarf with, mrspao sent me on one of our unsanctioned coffee swaps.

Speaking of better pix, is this not a fabulous picture? Snapped by Teofilo (and posted with permission from him), this is absolutely the bar I would have had, if I ever had one.

End of the year book and knitting update coming up. Remind me. NO CHALLENGES OR KALS OF ANY KIND, NO MATTER HOW TEMPTING. It's just the kiss of death for any projects and/or books I name. Why is that?

Hey, isn't that in SLO? I remember my SIL talking about a bar called the Library.

The mittens are goregous. Love them!

Good thing you didn't change the link as we're back to the old blog tonight ::: roll eyes :::

Those are splendid mittens!

The mittens are beautiful! But where will you find snow in which to wear them?

Re: Library Bar & Grill. Want a partner? We could take turns tending bar while the other one read aloud to the patrons. Gee, that's bound to draw them in, right?

Beautiful mittens and that book stand is really nifty!

Love your mittens! 2008 will be my year to expand my knitting horizons.

Love your mittens! 2008 will be my year to expand my knitting horizons.

The book stand sounds intriguing, I'll be curious to see other pictures of it.

Catching up - just in time to see not just any old f.o., but two of the things, in funky gonna keep your hands warm and stylish colours! Gorgeous Selbuvotter.

(And, please, I know the book stand came from Chris, but where did Chris get it?)

Gah! Must remember to hit post before closing window...
Great mittens! No more swaps or KALs for me either. 2008 is all about planning. Or something.

Yes. I've stop joining KALs because it prevents me getting anything done. The mittens are wonderful!

Beautiful mittens! The Library sounds like somewhere I'd like to visit, too. As for KALs, I hear there is a No-KAL KAL that is seeking members... ;-)

You're very welcome!! You and I need to pinky swear on the KAL/readalong thing. :) Your mittens are fabulous!

Wait! When did you start those mittens? You whipped them out.

I agree - no kal's, none at all. Oh wait a minute, Margene at Zeneedle is starting a EPS knitalong in January...mmmmmm... Com'on Carrie, you know you want to join in.

What about Bird in the Hand mittens?

Beyoootiful mittens. You are so talented! Or, maybe skilled. And, definitely patient.

Love the concept of the bookstand, too, but yeah . . . it does sort of look like it's floating. :)

And, oh cool on the bar pic.

Love the mitts -- what a great colour combination! Your stranding looks so nice and even -- I must practice more. :-)

Great mittens! Another FO!! We have a video game parlor here in town called The Library so all the kids can tell their parents they are going to The Library and not actually be lying. Is the bookstand one of those pyramidal fabric thingies? I've been wondering if those worked.

Ah, the joy of finishing a beautiful knit. They are indeed gorgeous.

Those mittens are a thing of joy and beauty. I love them! And I'm dying to get a closer look at your book stand; I have high hopes that someday I'll be able to read and knit without first arranging for the book to be held open with random heavy kitchen objects...

Those are really great mittens. I'm yet to make one of those, but they are mighty tempting.

Those mitts looks fab! I LOVE yellow and blue together.

(Atticus is whacking the keyboard as I type this, I think it means "Hi Hez".)

Carrie- Those are terrific mittens, what does one have to do to get on your Christmas list?
KAL's can be evil, don't listen to Brigitte.

Love the mittens! I've seen a couple people refer to that book.

I love your Selbuvotters! Great colors. I'm always tempted by KALs too and then fail miserably to follow through. Story of my life. Knitting + Reading = not as relaxing as either one alone.

Great mittens!!! You should totally do a convertible pair next! I am going to *try* to combine Eunny's Anemoi mittens with a convertible mitten pattern...HAHAHAHA! No, really! ;) Not until after the holidays though...

You are my stranded knitting inspiration, by far. Those mittens are amazing.

Lovely mittens! I'm glad you're enjoying the yarn :) Perhaps we should think about another one of our swaps in the New Year? You've got me addicted to Peets.

Your mittens are most excellent!! Funny how I go for long stretches of just knitting, then try to squeeze in a bunch of reading AND knitting right before Christmas... I think I am on the KAL diet for the next several months so that I get the projects and yarn I have used up, and also don't spend any further!

The mittens are beautiful, Carrie!

Love the mittens!
and the bar! mee toooooo

Beautiful mittens and I love that bar!

Wow! Those mittens are awesome. Much more intricate than anything I could do. I have that Holiday Knits book. I'll have to look at it again.

Maybe it's my glasses, but I don't see a bookstand there at all! :o

That bar is fantastic - let's pool resources and open one, too!

The mittens are awesome! I like that you said that they are "more of less matching". That's how all my pairs turn out.

What gorgeous mittens! I vote that you make convertible mittens next, because I have some of those (not knitted) and they're so useful.

I'm nervous whenever I see people pledging no challenges this year (and it seems to be a lot of people) because I've committed to over 60 books with my upcoming challenges, even with tons of overlapping. Maybe it's a huge mistake!

C'mon, SiL, you can't keep your loyal fans dangling. How does that book holder work, where is the Library Bar and Grille, why do you have such an obsession with knitting mittens, and, most important of all, why was Hezekiah excluded from this post? You had us all on tenterhooks about whether or not she would free the last of the yarn necessary for those lovely mitts. Either you have never written for soap operas or you have subsumed your cliff hanging abilities in sympathy for thosse striking writers or Hez has some hold on you about those gorgeous gloves.
SiL

Great mittens! I just love that book, and I'm thankful that the cuffs are easy to change around because I often like a different cuff then is on the pattern I'm knitting.

Glad you liked the picture. The interesting thing about The Library is that it's not at all the kind of bar you would expect based on its name and appearance. It's primarily a biker bar (note the motorcycle parked in front) and the waitresses wear very skimpy schoolgirl outfits. A very strange place.

Oh, and it's in Albuquerque.

GORGEOUS!
(see who's behind in blog reading now?)
ALMOST enough to make me want to knit another pair of mittens.

the mittens are fabulous!
Wishing you a happy 2008.