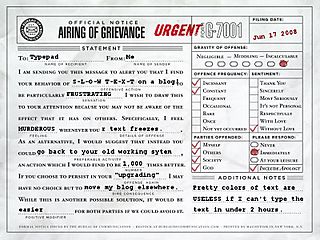 Air your own grievances, proclaim a crush, express an opinon at Bureau of Communication.  It's a wee bit addicting.

I'm not whining about jury duty. I've NEVER gotten on a jury before and they call me with repititious monotony.  So yay! After two days of jury selection, I got on a jury! I'm way too jazzed about this, aren't I? It's so cool! At last.

I'm way behind on blog reading,

What, there's no cut and paste on the "rich text" part of TypePad? Geez. They are so lucky that there has been no seaming or much knitting or reading this week.

The sweater fronts and back have made it as far as the desktop for said seaming, but no actual seaming has taken place. It turns out that when one has gotten used to dragging oneself into work by say, 10am, driving twice as far by the ungodly hour of 8:30am causes one to want to sleep all the time. I know, I know. You pity me my grueling work hours. They're just nice now.

There is also a partially knit sock and what I hope is the FINAL incarnation of my mother's shawl/stole/scarf, but honestly, I've been too brain dead to do anything but lay around and read. I do get to "craft" in the downtime during court, the Judge said. Let's see if the cops downstairs let me in with a sock on the needles.

Still reading The Hollow Crown by Miri Rubin. It's described as a "magical introduction to the late Middle ages" but I'm uncertain how helpful it is as an introduction. It's confusing enough being somewhat familiar with the timelines. She tells of Henry VI's infant ascension without stating that Henry V was married other than in a throwaway sentence relating to another marriage, much less that he sired any progeny or dropped dead, in something like half a page.  Way too much information, very organized, completely unintelligible.

Well no, that's harsh. It's pretty fascinating really, all the tidbits of facts and figures, towns, jobs, literature, land, food and more  but it's not that comprehensible as a whole. Maybe that's why it's a good introduction? Something that catches your interest leads to more research.

It could be me too. Possibly. That brain dead bit might be holding me back. Has anyone else read it? 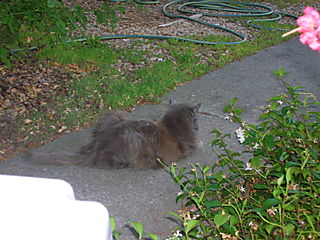 A Sweater in Pieces and a Smackdown 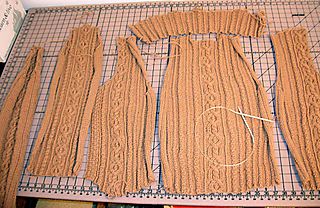 In other news, Typepad is so slow that I can barely post. Tara tagged me and one day I swear I'll get Typepad the 40 hours it needs to let me type it. It's making me crazy. So crazy that I'm not even going to try to fix that sentence. HURRY UP AND FIX THIS.

(Bluejay upper right around 2:00 by green hose. Click to enbiggen.) 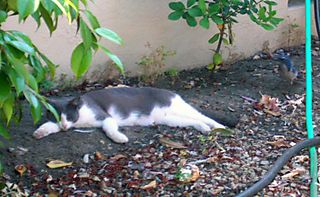 Books read in June May:

Silent in the Grave, Silent in the Sanctuary by Deanna Raybourn. (fiction) I really enjoyed the outings of Lady Julia Gray.It's hard not to love a book that begins with "To say that I met Nicholas Brisbane over my husband's dead body is not entirely accurate. Edward, it should be noted, was still twitching upon the floor." Alas, the next book in the series won't be out until next year.

A Distant Mirror: The Calamitous 14th Century by Barbara Tuchman. (non fiction) It follows the Count of Courcy throughout his lifetime. Perfect timing to read about the 14th Century from the point of view of a French nobleman.

A Fool and His Money: Life in a Partitioned Town in 14th Century France by Ann Wroe. (non fiction) More of a close look at a town and townfolk of Rodez than the trial case she was ostensibly following but a fascinating look into the times and people. They felt like neighbors. Rodez is in southern France. (very roughly)

Labyrinth (fiction) by Kate Mosse. This takes place roughly in the same area as A Fool and His Money but here the characters were both stereotypical and capable of the most supreme acts of idiocy to keep the plot going. A plot that was better covered by The Da Vinci Code and I didn't think much of that book either.

Departures (speculative fiction/aka science fiction)by Harry Turtledove, a collection of short stories. I think my favorite one was the origin of the common cold. 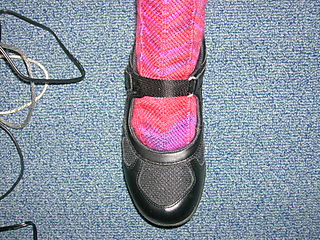 Jaywalker(s)!  Why I decided to take a picture of just one foot....I have no idea. The shoes are why I was so hot to finish the socks, they needed handknit socks to wear correctly. That's my story and I'm sticking to it.

Cat: Hez hates me. First I stuff her into a box and leave her all day at the vet for torment and tribulations, then to add insult to injury, she has to take 2ml of antibiotics twice a day for ten days. We are on Day Two. Pray for me. 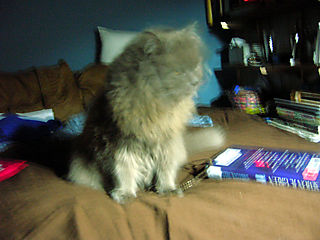 Hez sez "I will not pose nicely for you, you horrible excuse for caring companion."

Hmm. The book didn't either. Possibly it's the shakey cam I'm using. (Yes, my unsteady hands. Whatever happened to the days of point and shoot when you didn't have to freeze for 15 seconds?)

Sadly you'll have to wait for a picture because I left them, hopefully on the washing machine, this morning.

Because the fear part (is me overreacting no doubt as usual) leaving Hezekiah ALL DAY at the vet's to get her little teefies cleaned. Probably for the first time in her life. Tell me she'll be fine.

UPDATE: Hez is fine - the vet had to take a tooth, but she's "resting comfortably." Now I just have to cool my heels until I can pick her up at 4pm. Maybe I should look for something nice to bribe her with?