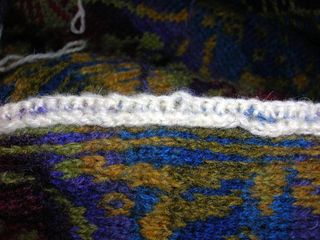 I'd duly crocheted the three center stitches of the steek....then abandoned Mary Tudor again. (I admit, the idea of cutting my knitting so that it's  basically turned to spaghetti was  hard to do). (That and Joan aka The Fairy Godknitter sent me that beaded scarf and then I got some Veronica yarn from La of Dizzy Blonde yarns......I'm only human. And I have to work.)

Sometime Sunday afternoon, I thought to myself, "This is ridiculous. " (Actually, I said it out loud. I have a tendency to talk to myself. Thank God for cellphones. No one notices anymore.)

And then I picked up a pair of thread scissors and cut the steek. (it did occurr to me about halfway through that I really should have used my  GOOD scissors and not closest pair, but then it wouldn't be me.) 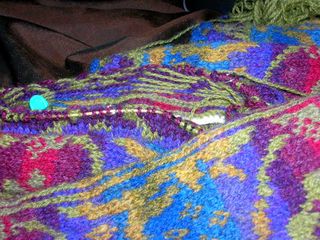 And if I didn't take truly awful pictures, you could see that the second picture's  top portion is a cut sleeve steek with a little bit of crocheted edge peeking out and a few rows knit on the sleeve , next to the unsteeked sleeve.

I'm not sure that clicking on it and making it bigger will help see it, but feel free to do so and oooh and ahhhh over it. Please.

From  Mommy Brain:(who is also a Carrie K)

Your result for What Your Taste in Art Says About You Test ...

The Renaissance was a cultural movement that profoundly affected European intellectual life.  Beginning in Italy, and spreading to the rest of Europe by the 16th century, its influence affected literature, philosopy, religion, art, politics, science, and all other aspects of intellectual enquiry. Renaissance artists looked at the human aspect of life in their art.  They did not reject religion but tended to look at it in it's purest form to create visions they thought depicted the ideals of religion.  Painters of this time had their own style and created works based on morality, religion, and human nature.  Many of the paintings depicted what they believed to be the corrupt nature of man.

People that like Renaissance paintings like things that are more challenging.  They tend to have a high emotional stability.  They also tend to be more conscientious then average.  They have a basic understanding of human nature and therefore are not easily surprised by anything that people may do.  They enjoy life and enjoy living.  They are very aware of their own mortality but do not dwell on the end but what they are doing in the present.  They enjoy learning, but may tend to be a bit more closed minded to new ideas as they feel that the viewpoint they have has been well researched and considered.  These people are more old fashioned and not quite as progressive.  They enjoy the finer things in life like comfort, a good meal, and homelife.  They tend to be more spiritual or religious by nature.  They are open to new aesthetic experiences.

This was a fun test, just browsing the gallery "test" pictures was a treat. Be warned, there's about 36 pictures to go through, three at a clip. 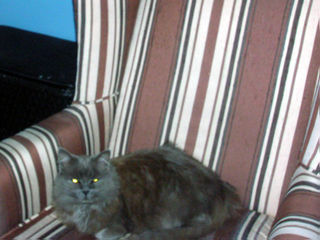 I won! I won! A copy of What If by Steven N Lee from A Reader's Journal. She actually felt badly about announcing the winner of her contest and then going on vacation before sending me the book. As if I didn't have enough  on my shelves  I picked up over the week:

Next post you'll see why I love Amy and should probably move to MN.

Hez sez, "I will not yield the chair, Madame."

Nothing from Nothing Leaves Nothing 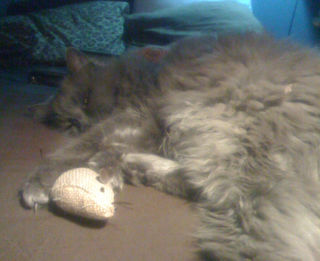 Hez sez "It's what time? What? I'm not getting up now. Go ahead. Get breakfast ready, willya?" 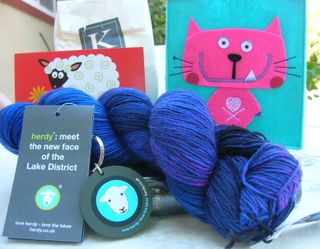 Hez, playing with her mouse (from Mrs Pao, whose lovely coffee swap package goodies for me are on the right (possibly minus the chocolate bars - it said Emergency Chocolate so I felt I had to eat it immediately).

Notice the slightly scrunched "K" on the coffee bean package - I might have made a pot with it before attempting to photograph.....

Notice how Hez can play with her mouse and keep an eye on me. Just in case I decide to take another vacation. I think  any requests are going to be denied.

And then she's taking her turn in The Chair. She's been sleeping in it at night. In fact, she's been hopping into it the second I get out of it, whether I'm done with it or not. Then gives me The Look.

I have done nothing at all on Mary Tudor, she stays unsteeked. I did get the cable cardigan seamed - all but the collar and the crochet edging. I'm convinced I've seen a collar sewn on with i-cord - wouldn't that look so much nicer? 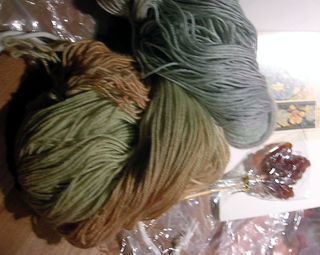 and that is all I've been doing. The winding of the skein (I really, really need to pick up a ball winder one of these days - the yarn is Heather by Schaefer and the colorway is called Georgia O'Keefe. It was the most weirdly tangled yarn I've ever wound. It would be fine and then all sorts of fishnetting. So after an evening of ball winding I spent an evening of bead stringing.

And now I'm attempting to master the art of bead knitting. It's fun, but I'll tell you, NOTHING comes easily to me. Stupid learning curve. At least I'm hoping it's a learning curve. 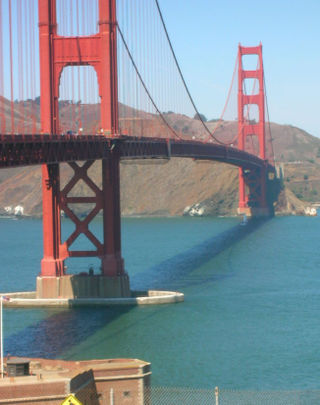 TV is picking up. Mad Men on AMC Sundays, The Sarah Conner Chronicles, Heroes and My Own Worst Enemy on Monday (am I the only one who thought that "driving your car and driving a wife are two entirely different things" was funny? It keeps getting dissed but it cracked me up. Besides, I like Christian Slater. The show was a little uneven but it was only the first episode, unlike Heroes whose sole purpose lately is to be confusing as all get out. The bad guys are good! The good guys are flies! Oh, Mohinder. Cocooning your neighbor is just such a bad idea. Unless he's Wilford Brimley).

Tuesday nights, watch The Mentalist with Simon Baker (of The Guardian, Smith). And NCIS and House, which is a little harder since they're on at the same time. CUT THAT OUT.

What else was good? Hmm. Life on Mars wasn't bad. Odd, but not bad. I've got to see the original BBC version now. And Life wasn't bad either. What's this, it's second season? I thought it sounded ridiculous, a former cop going to prison and then being freed and reinstalled in his job but.....it's pretty good. Friday nights at 10pm on NBC. I think NBC does not have a lot of faith in it.

There's just been a whole lot of not much lately. I'm suffering After Vacation-itis. I just want To Go Somewhere. Too bad there's nothing around here........

If It's October Does that Mean It's Fall? You must visit Union Purl and see her Q addition to her abecedarium [pictured at left].  Not only a *coolaphonic rendition of a Q in a cable quatrefoil but she includes so many interesting bits of information on the provenance of q's, architecture, Disney, photos, knitting, word origins, as she has on all her entries to date. Don't miss them. For example,Wynkyn de Worde? Truly, as Union Purl says, a beguiling name. Of course he was a publisher and printer, it seems almost ordained. I'm just thankful he didn't dabble in the winkin' forms of publishing.

My poor mother was in a hit and run accident last Friday afternoon. Luckily she was not seriously injured (her car was pretty slammed up, front end/side damage and the seatbelt broke. Broke and smoked. There's apparently a battery in there somewhere)and the hit and run driver was caught almost immediately. but she has the most spectacular bruise on her chest and she has refused to let me take a picture of it and post it on my blog. Can you imagine?

What Felony Are You?

From the ever felonious Purling Dervish, of course.

Mad Men last night was creepy. What's with Betty? And Glen, who is what? 10 years old? and living in the backyard. Her reaction was so inappropriate. I was surprised she actually called his mother.

Tonight?: Terminator: The Sarah Conner Chronicles. (Fox 8pm) I do love this show but I hope it's not going to turn into Cameron: Misunderstood Killing Machine.

Heroes at 9pm. Sylar might be good? Maybe. Maybe not. Mohinder's special power turned out to be his abs. Who knew?

Tuesday. Once again the networks hate me. I have to decide between NCIS or House? Gah. Normally I'm all about House but I flip to NCIS at the commercial break and get hooked on Mark Harmon. Thankfully by 9pm, it's all cable. Either Supernatural Science on the PBS stations or Ancient Discoveries on The History Channel.

Wednesday at 8pm Bones on Fox, of course. 9pm is Project Runway on Bravo. At this point, I'm rooting for Jerrell to win. Possibly Leanne. Maybe Korto. Not Kenley. 10pm is another tough choice. Either Lipstick Jungle that I basically watch for Paul Blackthorne (and pine for the departed Dresden Files) but Kim Raver is on it too. I hate Kim Raver. Or do I watch CSI NY where the romance between Danny and Lindsay seems to have vanished?

Thursday: Ugly Betty (ABC) 8pm. I've gone two whole seasons without ever seeing this show but nooooo, I had to catch it in Cambria. I hear it's not as good as it was, but it's pretty cute. Not to mention that Gray's Anatomy follows it which is back to being  Must See TV for me (really, Must See Kevin McKidd) (and possibly pray for George's untimely demise). 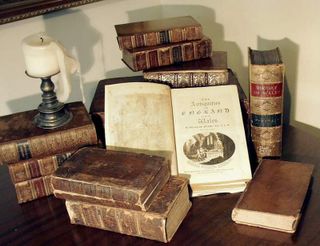 September Books. This'll be quick. I finished two whole books, Maureen Corrigan's Leave Me Alone, I'm Reading and Stephen Budiansky's Murder, By the Book. I enjoyed both. I couldn't help but think that Maureen Corrigan would love Budiansky's mystery novel as Dorothy L Sayers' Lord Peter Wimsey and his wife figured so prominently in it.

September Knitting No, I didn't finish ANYTHING. No steeking, not done seaming the brown cable cardigan (but closer). I may or may not have started some Christmas presents...

Hez sez there are no new pictures of her since she's basically glued to my arm whenever she deigns to come in the the house. She missed me.

* (You may blame Bloody Hell It's a Book Barrage aka chartrooose for that term.Cool wasn't enough. Now I'm using coolaphonic and I am positive I am #1 too old and #2 the wrong crowd to be using that term