From Knitting in the Shadows (now that we actually have rain - Yay!. Check out her recent vacation pictures to St. Thomas)

Well, far be it from me to contradict any quiz that says I'm elegant and classy but there was no leopard print umbrella to check, which is what I own. I'm far more likely to slap on my safari rain hat anyway. I like to have both hands free. 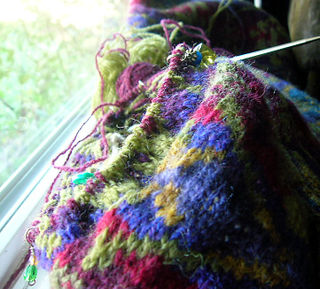 There's more progress on the sleeve of Mary Tudor than this picture shows but moving (the office) has kind of sapped me. 60 boxes. And the stupid elves haven't shown up to finish the job yet either. Gah.

Having an opposable thumb is not all that it's cracked up to be either. It's either arthritis or I've strained it? Who knows. I can knit, but I can't really play on the computer for long - and not having a computer at work hasn't helped much either. That's where all the lifting stuff happens.

Hezekiah officially hates the rain. She insisted on going outside on Saturday even though I told her we were moving the office and I wouldn't be home all day and it was POURING. She was drenched and mad as a wet hen by the time I got home.

So today I insisted she stay inside. When I got home she wanted outside via  the garage door,  the sliding glass door to the backyard and the front porch.

Can you believe it? IT WAS RAINING OUTSIDE OF ALL THREE DOORS. The horror.

This is Nerissa, my new niece. Isn't she darling? 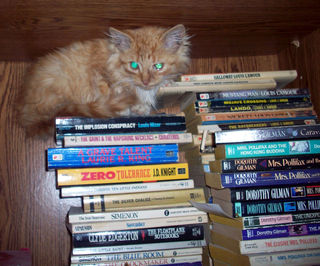 Last week, a box  came in the mail from KnitThink. 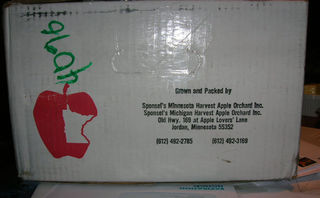 Inside the box - many many apples (and popcorn, although not nearly as edible).

I can see why people love apples now! They were crunchy! There was this wet stuff - my mother - who is from Michigan and wise and knows these things -  said that it was called "juice". It was a revelation. I still have to think of something wonderful in return.

No wonder people eat an apple a day to keep the doctor away. I wonder what four a day will do?

I've been working on the beaded scarf that The Fairy Godknitter sent me and swatching for the Veronica yarn from Dizzy Blonde Studios. While sorting my UFO's I found my half done sock from Bellamoden's The Moon is a Harsh Mistress - I think I've figured out how to fix the heel turn in pattern.  And now I'm wondering how she's doing - I've been so wrapped up in moving and knew that she'd come through her surgery, I haven't gotten any more updates. 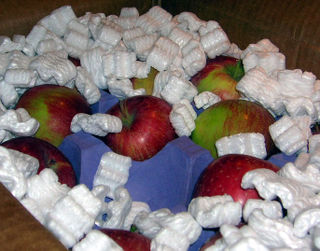 I'd list my October reading list but it's on my computer at work, which is currently dead on my desk. 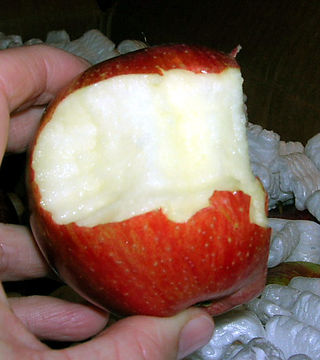 Tuesday, Novermber 4th - VOTE! If you don't vote - you will eat from the poisoned apple! (Not this one. This one is not poisoned. I checked. The old fashioned way)

Furthermore, if you don't vote, you are barred from either crowing or complaining about the outcome now and for the next four years.  This will be ruthlessly enforced.

I agree with Hez. Boo hiss to the rain!

Since I can't vote, but pay more than enough for a luxury car in taxes every year, does that mean I can whine for the next 4 years ;-)

Poor Hez. Obviously she's looking for the Door into Summer. :)

Rebecca is hanging in there, although it has been rough for her. I've pestered her to post....

This has been my year for rediscovering apples,too. My AHA moment was biting into a Gala. Oh, where have you been all my life?

Your new niece is scrumptious!! I hope your thumb heals up quickly, whatever is bothering it!

So, you know I'll be doing the umbrella quiz, too, but, the one thing I can't get off my mind here is HOW DO YOU STRAIN A THUMB????

I just voted myself. I felt guilty for noticing that I actually had to wait this year when usually I'm just in and out and other people have 8 hour plus waits. Ooh, those apples look yummy!

I'm in agreement with Hez about the rain...especially since it's pouring and I'm about to go into the field for a few days. And yup--I've checked all MY doors to make sure one isn't hiding bright sunlight behind it....same result. Imagine that.

Off to vote very soon (I have to wait for my younger daughter to get out of school; she wants to vote with me)! Those apples look good (aren't good, in-season apples a revelation?)!

What kind of apples did she send? Honeycrisp or Haralsons?? Either ROCK!

Are those Honeycrisp? Mmmmm. Minnesota finally shares the goodness with the rest of the nation. I have some in the fridge -- I think one will go very well with popcorn and knitting and watching the election results.

It's raining? I guess I'll get ready for it to come my way. I thought we were done for the week.

MN apples are the best! Did she send you Honey Crisps from Pepin Heights? Michael and I make a special trip down there every fall. Yum!

Those apples look so tasty! Our neighbors (who voted for the white candidate, btw) brought us a huge bag of apples so I've been frantically making apple-related things.

No wonder Hez was miffed! Raining outside EVERY door? No way.

Honeycrisp apples (if that's what they are...) ROCK. And if you can get your hands on an Ambrosia apple one of these days? Hold on to your hat.

I'm a black umbrella too!
I'm so jealous about your new niece! How does Hez feel about her new cousin, I wonder. Probably the same as she does about the rain...

Your new niece is really hairy! And, cute. I meant furrry. Yes, that's what I meant. Your mother lives in Michigan? So, so envious. I didn't want to leave Michigan and neither did eldest. We both sat around pouting for a year, when we returned to MS.

Carrie- So you couldn't find a place outside where it wasn't raining.

Wow - I expected a little more from the umbrella test but apparently I should rule the world. Funny, I have little interest in ruling the world ;) Snuggle up and read a book or put on your gear and play in the puddles, all depends on the mood!

I agree with you! I grew up with mealy apples. Not until I went to the Apple Valley- maybe about an hour from you? - did I discover the delight of eating an apple. I heart apples.

Nerissa is darling! And oh, those apples look so good! I love a good apple.

I know I'm late in replying, but I did vote--by absentee back in early October, in fact. I only wish the phone calls had stopped at the same time.

I chose the brown umbrella:
When faced with adversity, you rush to fix things right away.

You don't like discomfort or conflict in your life, and you are always looking to restore balance.

You live a serene, cozy life. You choose stability over excitement, and you're the better for it.
You are very together and down to earth. Not a lot phases you.

I voted but most of my candidates did not win. I therefore have the right to complain loudly and most aggrievedly if and when the people who were elected screw up.

I love the rain but I hope for Hez's sake that it goes away in your area soon...Awww...new family member, tres cute. I can't wait to see the finished results when your incredible Tudor is complete. I am impressed!!!

Hugs to you and all the felines, G

PS: Sorry to see that my previous comment here has disappeared.

I did a bit of an edit on my post from earlier today, thanks for the insight your words brought to me. There was no offense intended. Hugs, G

Those look like some mighty fine apples. And your furry niece is adorable!

Yum! Good apples... something we rarely if ever get here... they go mushy on the boat to Alaska, I guess.
Your niece is adorable!