It's Not Easy Being Prey 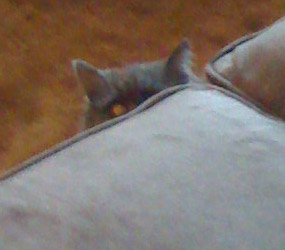 Wow. What a difference a new computer makes! I went from a Pentium III microprocessor to a.... Quattro Duet?  Core 2? Whatever.  Faster. Better. Stronger. Able to load my work programs fully and  and still play on the side. My kind of computer. Even Typepad is faster. Much. Much. Faster.

Despite the total lack of reading updates, there's been reading! I'm more or less through the Nightside series so I have a feeling I'll be starting on Simon R Green's Daemon series soon.

Hell to Pay, Sharper Than a Serpents Tooth, Hex and the City, Something From the Nightside (the first 3 novels in one) by Simon R Green. John Taylor is my hero (one of them). I pretty much read most of the series in reverse order but it wasn't that hard to follow along. I do enjoy being The Omnipotent Reader. John Taylor searches for his mother, where is she and what is she? As he finds out and rights various wrongs, we get a ride on the wild side of a fantastical London.  My only question at this point is what happened to Cathy Barrett?

The Maltese Falcon by Dashiell Hammett. Well no wonder this is a classic. It took me a few to get into the book, I needed the right atmosphere but the backstabbing convoluted plot holds up well after all these years.

The Music of Pythagoras:How an Ancient Brotherhood Cracked the Code of the Universe and Lit the Path from Antiquity to Outer Space by Kitty Ferguson. Oh, that Pythagorus. If he only knew what he started. I enjoyed the way Kitty Ferguson built on what was probably more Pythagorus myth than fact through the centuries. An interesting read.

The Fifth Child and the sequel, Ben in the World by Doris Lessing. The Fifth Child was quite, quite depressing. A nice middle class couple stubbornly defiantly conservative determined to have a large family despite the naysayers. There are cracks in their homelife before Ben, the fifth child appears but how Ben exposes their frailites is riveting. Ben is much more sympathetic in the sequel.

Wastelands: Stories of the Apocalypse, edited by John Joseph Adam. Short stories by Stephen King and others. I was reading this weekend before last and put it aside thinking, "Too depressing." Yes, because evidently my Apocalypse stories have nothing but Happy Bunnies populating them. Wrong book for the mood but I'll come back to it. I love a good dsytopian novel.

Shooting Gallery by Hailey Lind. This mystery series follows a Berkeley artist and the murders she falls into but has quite a lot of entertaining and educational info about the world of arts and artists (and is on my stomping grounds!) I'm really sorry to hear that the publisher has dropped the series. Boo. Hiss.

French Lieutenant's Woman by John Fowles. Much more provocative than I'd realized. Written in 1969 with more snark and social commentary than meets the eye.

TELEVISION: Tonight The Closer returns. Great. Same time as 24. At least it's not on at 10pm. Why are all my shows on at 10pm lately?  Oh! Wednesday Life on Mars is back.

i'm so excited about the closer! *squee!*

Is it worse to be prey or a scratching post? Tossup.

Yay for a new computer! I had to use my assistant's pc last week. So slow that I felt guilty enough to order more RAM.

Can't wait for the Closer!

Oh oh. Best give her a treat and hope she is merciful. ;)

You'll have to let me know what you think of Green's Daemon series.

So, who do you think would win, Harry Dresden or John Taylor? Yeah, sorry, Harry...

Oh! Congrats on the new computer! :)

Hurrah for the new PC! It is so nice when they are fast and full of extra room. I've read some Simon R. Green but I can't remember the titles...a bit dark is the impression I remember.

Congrats on the new pc.

Here I was feeling good for finishing two books in january and you've read a complete bloody bookshelf.

How come you're so productive this month? aren't you accounting types supposed to be swamped at this time of year? instead of making us completely inferior and unproductive individuals feel rotten about ourselves

Have you ever read The Magus by John Fowler? Reality is an onion -- no core, just layers upon layers to peel away.

What a great title (and picture!). Thank you for reminding me I still need a good book to read!

Yay for a new computer!

Yeah, the Maltese Falcon can be a bit hard to get into, but it is well worth it.

Oooo, the Closer! I'm really, really getting into that show.

The Fifth Child is really creepy, but I thought it was better than Ben in the World.

Hannah just watched "The Maltese Falcon" in her Film class. She didn't get why it's a classic; as usual, one should turn to the book.

I just finished setting up a new computer, too. Well, actually it's my husband's old computer since he built a new one for himself. But it's still better than my old one. And plenty fast.

Wow -- that's a great list of books. The only Simon Green I've read is the Man with the Golden Torc, which I quite liked; must pick up the second in that series. And I, too, am tired of the 10:00 show times -- seriously, people, doesn't anyone work?!

Cute kitty picture! I was so excited to see The Closer, that I went straight to Jokes.com and promptly forgot about it! Thanks for reminding me, I can't wait to watch it.

Ooh, I read a book too: "Not tonight, Darling, I'm Knitting". It wasn't that great.

"Oh, that Pythagorus. If he only knew what he started." - I laughed out loud when I read this!

That photo makes me think I would never want to be on Hez's wrong side ...

I really want to read the Maltese Falcon. I should get a copy!

That is some reading list...when do you find time to work and knit...and sleep?

I love that photo! Can you bribe her into leaving you alone?

Wooopie...wow, sounds like the new computer comes with all the bells and whistles. And Hez approved too, I like that.

Your reading list is formidable. I am trying to squeeze more book time in these days but it isn't always easy.

Aren't new computers great fun? I just discovered Laurie R. King, and have been immersed in reading at every available moment! :o)

Hez is quite the huntress. Wish I had a new computer and you had my laptop! LOL Anywho, the Closer? that leads to another wish...a television.

I'm not sure I need to add more 'to read' to the list cuz it's too long already, but some of these got added nonetheless! Have you read anything else by Doris Lessing? I'm determined to get through The Golden Notebook this year!

You need a DVR to tape one show while you watch another.

Your computer sounds like Superman - keep it away from kryptonite. Any "hoo-ray" (in my best suthun drawl) for the return of Brenda Lee Johnson - and Fritz because that's who we really tune in for!

Your computer sounds like just what you needed!
How do you read so much and still get any knitting done?!!!

My husband's been complaining about how slow his computer is these days. I have a feeling we'll be replacing his sometime this year if he has his way and finances cooperate.

I read Baby Shark by Robert Fate last month and liked it. I am glad you enjoyed Baby Shark's Beaumont Blues. I am looking forward to reading that one.

I hope you have a great weekend, Carrie.

Congrats on the new computer.

My reading has totally suffered with this knitting sweaters thing but I'm having fun and that's the point, right??!!

Holy fremole...you're reading a lot! Puts me to shame.

It's so nice to have a speedy computer, isn't it? Everything is so zippy!

I read The Fifth Child years ago...didn't realize there was a sequel.