Home Archives Profile Subscribe
Insert Not Too Clever Title Here. Thanks for the Tip, Typepad. Gah.
Pimping for La and Quarterly Book Reviews

I Only Work the Days that End in "Y"

Thanks for all the well wishes formy sil! I didn't want to post the particulars for privacy reasons but she's doing well and is coming home today.

A moment of silence for the slain Oakland policemen.

The wildfowl has just been astounding around my house. Down the block on someone's front lawn, these lovely critters. I think they're turkey vultures?

I had to pull over and snap the picture with my iPhone on my way into work, so that is literally by dawn's early light.

They're probably in mourning too about the neighbor on the top of the hill taking out his four dying pine trees and the eucalyptus. The eucalyptus was really beautiful but they're basically matchsticks and in a drought inclined hillside? Not such a good idea.

The latest pet in the neighborhood. (Btw, urban chicken raising will never replace knitting. Never, never, never. At least not in my house. Unless they stay adorable cute chicks) 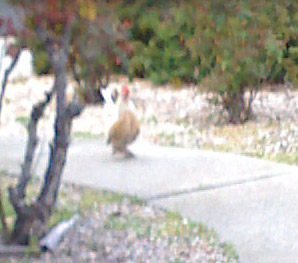 I took this picture through the slats in my blinds but dagnabbit if he didn't spot me anyway and come running up onto the porch. I attempted to lure him back home - he followed me like a puppy dog - but he didn't want to stay there.

If it hadn't been freezing, 7am on Sunday morning and I'd been wearing more than my nightgown, I'd've pounded on their door and demand they they  feed their rooster post haste. As it was, I ran home and cowardly hid in my house. I barely managed not to feed him canned corn. There's something about hunger that makes me want to fix it.

There's something about crowing under my bedroom window at the crack of dawn that makes me want to pop him into a boiling pot.

KNITTING: The number one sleeve is done on Mary Tudor (not pictured - that was the day before finishing)  and sleeve number two is underway. Two rows a night basically means glacial progress but better that than none at all and two rows is all I can manage after a day of wrestling taxes.  My mother spotted the perfect buttons for her at a Quilt Fair.

How Dysfunctional is Your Reading? You got 11 out of 13. Shame you'll never get a book deal.

Ha. Little do they know. Now go bombard Petunia on the wonders of mindless television. Oh! Speaking of television, the series finale of Life on Mars will air on April 1st. I really tried to watch nothing that'd get cancelled early this year but Life on Mars was irresistible. Even w/CSI NY and Law & Order up against it. I hope the ending stays true to the show. Battlestar Galactica's finale was .........well, it was. I didn't hate it but I didn't love it either.

Books: Y'know, I've got this humongo post going where I've reviewed, somewhat haphazardly all the books I've read this year. I'm debating if I should just post the thing, en masse, on December 31st.

I think those are just plain ol' wild turkeys.
I got 10 out of 13, but most of those books I'd never even heard of. I'm a good guesser.
That stupid rooster would be off to the pound in no time flat.

I'm glad your sister is doing well and on her way home!!!

Hmm. I think those are wild turkeys.

9 out of 13. I had only read a couple of the books, but was familiar with some of the authors which saved me from hitting 1 out of 13. Phew!

Don't knock yourself for two rows a night. Progress is progress, whether large or small. Some of us just bury things in the closet and try to pretend they don't exist. You're at least moving ahead.

Those ARE wild turkeys -- so ugly they're cute (?). We have a ton of them around here -- they are huge!! I can so sympathize on the sleeves -- what a slog!

Healing wishes to my surrogate sister-in-law.

Speaking of ends of shows, it's weird that ER only has one more episode, but this week's was nice to start clearing out the storylines.

Those buttons will look great with Mary Tudor... just the right color.
When I lived in CA, there weren't wild turkeys there. I wouldn't enjoy hearing a rooster early every AM though... Maybe the turkeys could chase it off? They look pretty big.

Turkeys! My sil lives in the East Bay and one of our favorite things about visiting her is seeing the turkeys come down the hill behind her house every morning. Last summer when we were there, we also saw a coyote, so the turkeys were a bit... scarce. Too bad he doesn't eat the rooster.

Your colorwork is amazing.

My lord the work you have put into that, I can't wait to see it all finished up!

Wow --- sort of went all Walter Brennan on the fowl!

Are your neighbors breeding chickens? Because roosters don't give eggs. ;^)

my best friend trains chickens. yeah. you heard me right.

Good job on the sleeves! Mary Tudor is looking fab. I got 4 rounds done on Scotland. You'll still probably be done first!

Mmmm... fix hunger. :D Can I order some lasagna? Maybe some homemade mac and cheese?

I think someone has already told you, those are turkeys. Wild ones. And my husband is amazed, he didn't think they were that far north in california! He used to hunt them, well out here in the midwest.

Best wishes with the work stuff.

I am glad your sister-in-law is doing okay, Carrie.

Wasn't that awful about the shootings in Oakland? My heart goes out to all of their friends and families.

What a great photo of the birds! I enjoyed the sound of a chirping bird outside my window when I laid down for a little nap this afternoon. A crowing rooster waking you up at dawn is no fun though. We used to have a neighbor that raised roosters (we think for fighting) and they were crowing at all hours.

I can only imagine the reaction around here should a rooster ever show up on my doorstep...

We shall not speak of "Life on Mars". Or of the shows that, for whatever insane reason, continue to be renewed. *sigh*

But, I am glad your SIL is doing better!

Good news about your SIL.

I sort of thought those were wild turkeys, too, but what do I know?

I am wildly impressed that you can knit colorwork AT ALL during busy season. My tax season knitting is warshcloths, maybe a sock.

Even at two rows a night, you'll make it!

I agree, they look like wild turkeys. The sweater is looking good!

Yup, wild turkeys. Keep an eye out for a male -- they've got fabulous tails! Mary Tudor is looking lovely, and those buttons are perfect. Soon tax season will be over and you'll be able to live again... ;)

Belatedly: yes! wild turkeys. We have a flock of about 11 that lives in the woods and fields around the lake. They are a hoot to watch.

Perfect buttons for MT! Do you listen to the Cast On podcast? Her most recent show has a bit about Starmore and a women who knitted MT. Interesting.

I've never seen anything like that, but we don't have wild turkeys here. There was talk of bringing them in to breed in the wild though. I don't know how that's going.

Anyway, I left you an award on my blog.

Busy, busy...do you ever stop girl?

I am back to crocheting and knitting myself, ya know it's part of ME month!

Hugs to you and Hez, G

Chickens and turkeys...just where the heck do you live?

Carrie- A rooster walking down the street, now I've seen it all.

Those are wild turkeys... we see them a lot around here. Love the rooster, but understand how you feel about the crowing. BTW, excellent choice of buttons for an awesome Renaissance sleeve.

I really really want to see the end of BSG!!! I'm waiting and waiting :)

I love the rooster - I would have been out there feeding him myself!