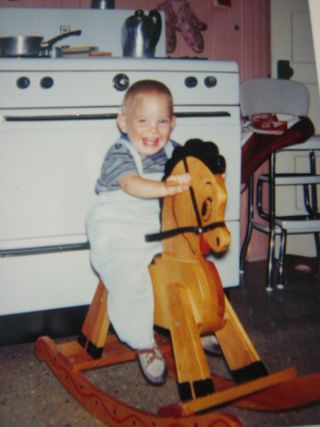 Isn't he adorable? He may be a wee bit older now. 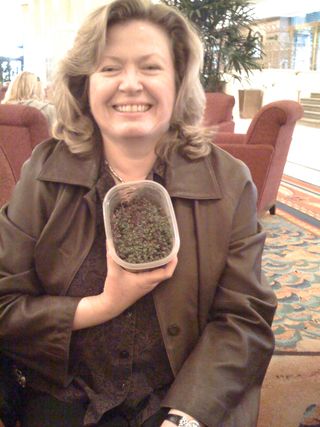 Angie,  holding her specially imported nutmeg thyme unless she hates the picture, in which case that's a random organic gardener at a high end Farmer's Market in a San Francisco hotel lobby. (It could happen.) (No pictures of me until I reach my picture taking weight again (doubtful) but especially since I had a lovely salivary gland **infection and my face was puffed up (well, half of it) like a .......puff fish.)  Angie was nice enough to be seen in public with me anyway. Lots of public. Cable cars. Cheesecake Factories. Street walking. Irish urchins. Tasty Salted Pig Parts.

She came bearing gifties. I showed up late. Check out those stitch markers! [Edit: Hey! What happened to the swag pic? Gah.] Sweet! That's a kitty cat face on the button/pendant at 6 o'clock in the picture. Too cute.  But I did provide cable cars and Bay Views and considering it was 94 degrees when she landed in San Francisco, a pretty nice wind chill factor for strolling the wharf. Okay, it was a wee bit chilly but I'm not the hardy Midwesternenne.

She was knitting while waiting for me but no knitting commenced once I got there. We almost attempted Urban Knits Studio.... 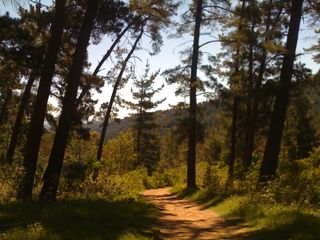 Other than Not Working, Wining and Dining about the City, what have I been up to? Not really catching up with everyone, I'm sorry to report. (Like you can't tell.)  I will! Eventually. I keep getting distracted by the almost finished Mary Tudor

(which reminds me, GET OFF THE COMPUTER AND FINISH KNITTING THE BUTTONBANDS YOU LAZY SOW). 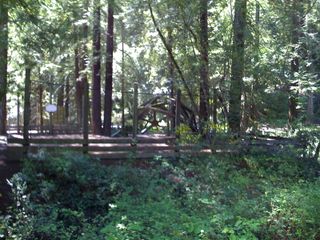 (Pictures: the trail is Phillips Loop in theRedwood Regional Park, click here, Bay Area Hiker for pictures and some other hike info in the area. The other is the playground of the elementary school in Canyon.)

OTOH, TV appears to be breaking up with me (the old; it's not you, it's me). You don't believe me? Life on Mars, cancelled. Life on the bubble. The Sarah Connor Chronicles killed Derek Reese (Brian Austin Green),  effectively killing my interest in the show. (OMG, is that how old he is? Urgh.)

NCIS.Ziva loves Tony - does Tony love Ziva? And who IS that guy?  No, not that one. The other one.

Being Erica. I want to be Erica. Well, I want to be me but getting to do what Erica does. (The link has video so it is not a stealth surf). 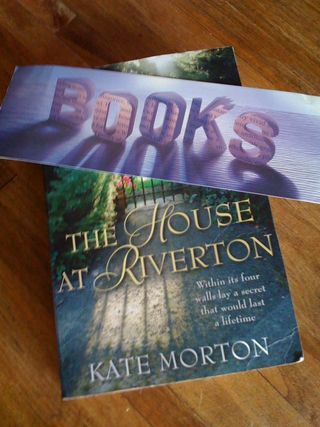 Knittin Brit in WI sent me her copy of House at Riverton complete with the English spellings and a bookmark direct from The Totnes Bookshop in Devon. I can't decide if I'm more charmed by the bookmark or the book, which was a pretty riveting read considering the pace is stately and the book is long.

Okay, okay. I always want to know What Is Going On  & the suspense was making me crazy. I stayed up until 2am finding out the last of Grace's secrets. I managed not to read the ending but at 599 pages? Amazing. Sometimes the endings are baffling but in this case it would have spoiled the book and it was such a good read it would be a shame. B+

Cute kitty sighting. Like a baby Nerissa (who is basically a baby herself.)

Dog Days and New Tricks by John Levitt. It's Louie I love but Mason is hard to resist. A jazz musician in the City fighting Black Magic? Swoon.

Play with Fire by Dana Stabenow (5th in the series) Do not read this one if Christian fundamentalists make your blood boil or you are a Christian fundamentalist. It's a pretty compelling psychological mystery exploring relationships, religion and racism in Alaska. I heart Kate Shugak (and she would cringe to hear/read that). Of course, it's really Mutt that I love best. I'm sensing a trend. (I might have peeked ahead to see what's in store for Mutt and while she's okay, there were some other twists I did not see coming. Relax, Chris, I haven't read them out of order. (It hurts her [thumps chest] HERE when I do that.)

I've just started Suits Me: the Double Life of Billie Tipton by Diane Wood Middlebrook. She's written a bio on Ted Hughes that I wanted to read when I ran across Billie Tipton. Can you imagine? Having to live life like that in such utter secrecy? Famous to boot.

Finally finished Lover of Unreason: Sylvia Plath's Rival and Ted Hughes Other Doomed Loveby Yehuda Koren. (I keep writing Tom Hughes. Shades of old As The World Turns?) Assia starts out so spoiled and selfish it's hard to feel any empathy for her but by the end of the book, I almost admired her. If she had only had the self reliance that would have let her stand on her own she might have been a true force. As it was, she was something to be reckoned with but felt she was nothing without a man. And, naturally, a particular man. Too bad she and Sylvia Plath decided on Ted Hughes as that man. 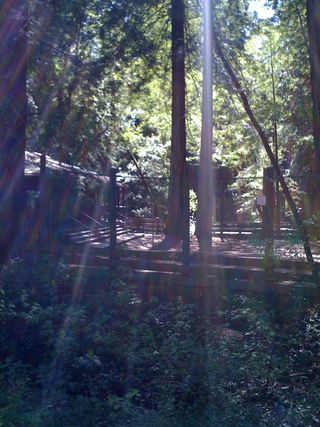 He imagined some words for the job, a lovely pack-
Clear-eyed, resounding, well-trained,
With strong teeth.
You could not find a better bred lot.


He pointed out the hare and away went the words
Resounding.
Crow was Crow without fail, but what is a hare? 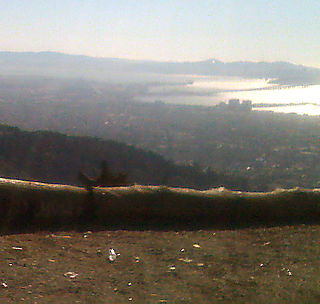 It converted itself to a concrete bunker.
The words circled protesting, resounding.


Crow turned the words into bombs-they blasted the bunker.
The bits of bunker flew up-a flock of starlings.


Crow turned the words into shotguns, they shot down the starlings.
The falling starlings turned to a cloudburst.


Crow turned the words into a reservoir, collecting the water.
The water turned into an earthquake, swallowing the reservoir.


The earthquake turned into a hare and leaped for the hill
Having eaten Crow's words.


Crow gazed after the bounding hare
Speechless with admiration.

*It is still April, right? I'm not too late! For me. Happy Birthday! 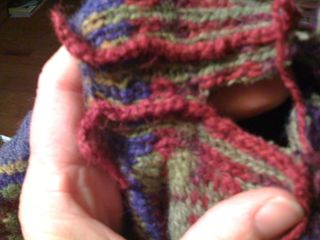 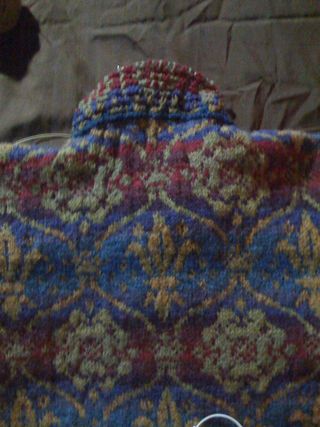 The steek is off center because I didn't know you're supposed to add and end on the edges not the center to leave three or four fully knit stitches to crochet & cut the actual steek on. I could probably just hack right down the middle of the Jamieson's Shetland it it'd be fine. Maybe.


Look! A collar! And facing the right direction too. (I managed to get left and right confused and knit about a quarter of the collar inside out first. There was a picture but my iPhone likes to scramble the picture order which is then compounded by being upside down or sideways,  then the thumbnail pictures being the size of a........well, a thumbnail and I can't quite figure out what they are when I go to upload them.)

She has both her sleeves and is only lacking her buttonbands.

You all might want to say what you need to say to your loved one and prepare for The End, I'm pretty sure when I finish, it's the final sign of the apocalypse. Darn. I have more sweaters I want to knit. 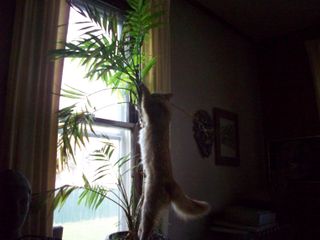 The palm climbing cat isn't Hez but her cousin, Nerissa. Evidently she's taught her sisters the trick too. It's a jungle out there.

Doesn't that title sound both street and stuffy? Schizo.

About the club: The website is The Mean Girls Yarn Club

Please continue to Save the Words

keleusmatically: in a demanding manner.

What Keyboard Key Are You?

Once they get to know me? Ridiculous. To know me is to love me. Shamelessly cadged from Purling Dervish.  Eons ago.

Books read since the dawn of time beginning of January:

1. Liberation: Being the Adventures of the Slick Six After the Collapse of the United States of America.  Brian Francis Slattery (2008) 299 pages - I liked this book even though it has its flaws but this paragraph alone would have sold me: "...the employees of the library made a spontaneous pact to defend it as soon as the police force stopped working, and now they just live in the building. They hauled beds into the offices and corners of the huge reading rooms, put plaid couches against the marble walls. An army of cats patrols the halls, has litters on the stairs. She imagines that some of the librarians are fulfilling a long cherished fantasy."

This struck me. It never really occurred to me how true this is: "He now understand that this expectation of progress applies only to young nations, for most of the planet lives among the ruins of dead empires: Angkor Wat, the Great Zimbabwe, Rome, the Mughal palaces."

Zeke Hezekiah one of the six. What a fabulous name! Hez concurs. 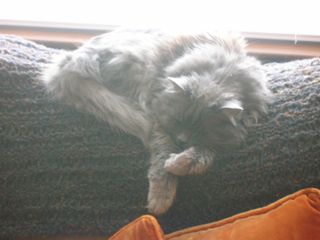 "Musically, Arbahim sounds sort of like a Hebrew-speaking version of the Grateful Dead, but lyrically, I guess they're more like Whitney Houston, not that I would share that analysis with Todd."

"Kind of selfish, isn't it? " I didn't mean to say that, didn't want to get into it with Yosi. But I was suddenly throbbing with rage. "We apologize three times and if we haven't been forgiven we have permission to feel forgiven? What if what we did was really bad? Three apologies can't always be enough. A million apologies might not be enough for some transgressions. Now that you've apologized to three times to Janie's father, do you honestly believe that you're absolved? Honestly?"