Well, almost. She needs her buttons sewn on and I got bored weaving in ends before plunging her into her bath (I wove most of the ends in while knitting - except the sleeves. They have a lovely fringed effect)  but other than that? Done!!

Much thanks to Marina, who sent me a picture of a sample she knit of the mitered corner along with a chart - it turns out I'd neglected to do the picking up of stitches on BOTH right and wrong side rows. Thanks also to Joan and Lorraine for their help.

There's still one more update to come - when the buttons are on, but the knitting? She is done. I had a

bump on the road to progress when I put in nine buttonholes for eight buttons - I knew I shouldn't have picked her back up Saturday night while watching Suspicion, but oh well. It worked as a swatch for the buttonholes  - typically horrid - but serviceable. Too bad the mitered corner with the buttonhole is going to be the side that shows - it's wonky, but oh well. (Second picture of the corners is the buttonhole miter.)

TV: Law & Order: Criminal Intent and In Plain Sight on Sunday nights. The season finale of 24 tonight, which I'm going to miss because I'm going to see my niece unwillingly sing opera, much better than finding out how Jack saves the world this time, don't you think? The season finale of NCIS is tomorrow (Tuesday) night. Cross your fingers Ziva doesn't die or get deported and we're stuck with that flirty chick Jules. Even Abby fell for her! Feh.

Chuck was renewed! Yes! The Dollhouse got the nod too. I really hate how CSI:NY ended, killing off one of the characters is getting so cliched. Like Lost. No one is safe.......unless it's Jack or Kate, the two I'd really like to see die. I didn't actually watch Gray's Anatomy closely enough to realize they did the "which one will die?" bit either until Opal filled me in. (Okay, I admit I was expecting Izzie to die and I didn't feel like bawling my eyes out so I basically had it on as background noise).

Wow, the big networks have dreck on their schedule for summer. Give me cable. The only thing that looks good to me is Glee, and I refuse to figure out why.

Reading: After The Periodic Table I thought I'd go for something light so I picked up Cattery Row by Clea Simon, one in the series about Theda Krakow, music journalist and Musetta's mom. Theda is on the trail of catnappers and kitten mills and it had a fabulous ending. She waffled too much about her love life - the proverbial struggle between the Good Man and the Bad Boy but that's probably aggravating just to me. 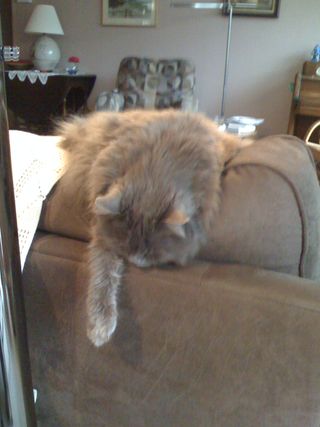 Currently reading - and loving - 1632 by Eric Flint. It's the first in his Ring of Fire series, a small West Virginia coal town is flung back in time 400 years to 1632 and smack into the middle of the Thirty Year War in the Germanic principalities. I'm sorry to report that I know practically nothing about this piece of history even with my half German descent. I love that it's unabashedly pro United States and that we're the good guys. I also love that the originally rallying cry was for the United Mine Workers of America.

Hez sez: "Geez, you're finally done with my blanket? It's been exhausting watching you all these years. Wait. You're not casting on another member of the English royalty are you? I give up."

Have a good week!

Thata girl! Way to finish off Mary T. Looking forward to seeing the full pics of her.

I agree, TV is looking rather lame for this summer. Time to update the Netflix Queue with something worthwhile.

Yay for finishing MaryT, more or less the less the more the less.

You're welcome! I'm glad it worked out. Next post, modeled pics, right?

Poor George, I didn't expect him to go so quickly. I'm all ready for the Summer. ~800GB of movies and shows to watch. Want me to record 24 and put it on a disc?

I was happy to hear that Chuck is being renewed too. :-) And Dollhouse! I'm so thrilled that one will be back. I really didn't think it had a chance. I'm looking forward to a summer off from television. Maybe that will mean more reading time. :-)

Love MT and really can't wait to see her with her buttons done up! Hez doesn't seem very pleased though. Cute pic.

I'm so glad I lived to see the end of the Mary Tudor knitting. I was beginning to wonder. Now get those buttons on!

Very cool! It will be nice to have a new project to work on I'm sure! Summer usually has all the good shows for me, but we got rid of HBO and Showtime, so no True Blood at least, and I'm already watching LO:CI and In Plain Sight, which I considered summer shows. I'm looking forward to the new what's his name (from "Lazy Monday" - hilarious!) and his new doctor for hire show, though.

It's a parody of the SNL video - and so applicable if you've spent any time in L.A.!

I enjoyed 1632 but I think I haven't read others in the series for an unknown reason. Have you read S.M Stirling's Dies The Fire? Not historical but another "alternative" reality series.

I can't wait to see the sweater, and I'm going to put 1632 on hold at the library right now.

You finished before I finished my thesis (maybe this weekend for me). Congrats. Now you can focus your efforts on spinning.

Apparently I'm not fit to leave a comment, this is my second try (if the first goes through will you delete it?).

Summary: You finished MT but I didn't finish Thesis. Maybe this weekend.

Now you spin. Hez thinks spinning is a great idea.

Carrie- You did a terrific job- it was the instructions that were lacking.

Well, no spoilers, but I thought the season ender of 24 was a bit of a snore.

She's getting her spy day! :D

Do you think Hez would approve if you knit a pattern called CATherine of Aragon???

WOW! MT looks perfect... It's good to have it done before it gets too hot there to knit with wool.

i really love 'in plain sight'. also, 'the closer' and 'burn notice' should be starting up again soon. not to mention the showtime series'. so summertime tv doesn't totally suck. :)

MT looks wonderful. i detect no wonkiness. go easy on yourself!

Can't wait to see her in all her glory.

We only get 13 episodes of Dollhouse and it's remaining in that Friday night slot - not a good omen.

I knew you'd be done with Mary T. before I was done with Scotland! Good going! I have steeked, but not picked up for the sleeves yet. Maybe you will inspire me. Wait, a pro-American coal mining town in 1632??? Umm, still a colony. I'll shut up now.

Yay on getting Mary T mostly finished. Looking forward to seeing it modeled.

OK, so you know what I think they should do? Stagger the start/ends of TV shows. That way we're not left watching repeats all summer long. Heh.

Oh, yay you for finishing Mary T.! You inspire me now to pick up Delores, and get my act together...

I am looking forward to pictures! And 1632 sounds like great fun. Summer TV is not a pretty picture. Bring on Netflix.

MT is done (mostly)! Hurrah!! The mitered corners are lovely and I see no wonkiness. Can't wait to see her in all her glory.

I'm putting 1632 in my to read list since I'm fully German and know nothing about the period.

We just upped our netflix subscription in anticipation of summer sucky TV.

You can't get rid of Hez's blankie!

I thought maybe you'd given up ("finis") --- good to know you're still plugging away.

Love the Mary Tudor - you've got beautiful mitered corners there.
Thanks for the comment on my blog. The fishy fishing nets came from Hobby Lobby. And the stink is finally gone, thank goodness!

Mom says to get those buttons on, she wants to see the FO. WWWWooooo..is that a bad word? Snort!!!!

Congratulations on finished MT! That's quite an accomplishment! My son is very happy the Chuck was renewed. I would have loved to see more of "Life".

I was disappointed in the Lost finale!

Mary Tudor is done? Wow! Congrats! Will we get to see a photo of her after her buttons and bath?

Har! I agree. Sawyer was my fav, although I gave up on the show when he had sex with Kate in the cage. Ewww! I thought he was classier than that!

Hez sez, "Maybe if I drop that needle down here, she won't be able to find it and I can finally get some ATTENTION!"

Mary Tudor is a very interesting choice of character. What made you choose her?

now those are some good looking mitered corners! Can't wait for the big reveal!!!!

Whoo hoo! You finished it!

Oh wow! I can't wait to see it on. She looks beautiful!

Ahhh, summer TV. Mine consists of Deadliest Catch......my all time favorite. Yes, I AM serious. LOL And Ice Road Truckers. No, I don't live in a shack......but I probably should. ;P

Can't wait to see pictures of you wearing Mary Tudor.

Excellent Blog every one can get lots of information for any topics from this blog nice work keep it up.

The cat is so cute !

I'm looking forward to the new what's his name (from "Lazy Monday" - hilarious!) and his new doctor for hire show, though.

Yay for finishing MaryT, more or less the less the more the less.