A couple of before and after pictures of the back yard taken........well, I think the top one was right before we redid it but the snow picture was the day of Dad's burial back in December. The last time it snowed here was in the 1970's.

And I had this in draft before I saw Yarnerina's post today with the link to How Not To Act Old.

Ha. If I didn't take pictures of my flowers or my cat, I'd have nothing for the blog. Well, I could show you Elizabeth I but there's been negative progress. (Fine.  I couldn't stand it and I'd managed to knit the center motif off center so it had to be frogged. I am still not to where I was. Annoyingly.) (I am also currently resisting the urge to cast on for a pair of kilt hose.)

Just so you're all on notice, I'll act anyway I want to. I'm old enough. And there are too many good people who have been denied that privilege.

The first picture before the re-model highlights the winter-neglected old beds (which is going to happen every winter) and the barbeque collection on the old patio. The birdbath is barely visible right over one of the barbeques and the rock wall retainer to the left. (That was heck of fun. It used to circle the doughboy pool and one summer I took a sledgehammer to it. It was supposed to be for a flagstone pathway but plans and all that). 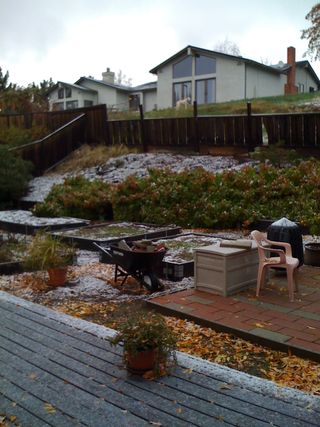 I might've taken the second  picture for the snow but I also took it for the darling GINORMOUS lab that lives above us. See the "pony" at their glass door? And the broken plank in the fence? That was the pathway

for the cats between the yards and every once in awhile, the dog would put his head through the hold and say hi.They don't like the new fence. At all.

Is there a good show I'm missing on TV? I missed the first episode of Mad Men Sunday night but I do have it taped. I did watch Leverage though. Yes, it's sad but true. Leverage is more my cerebral style. And Burn Notice.

The Closer is back - I can't imagine Brenda as Chief of Police - what will Pope do? But it was fun seeing President Laura Roslin, er, I mean, Capt Raydor vet her.

I tried to watch Rizzoli and Isles but it was too derivative of Criminal Minds and Bones.Why are all the dysfunctional social women such fashion plates?  You'd think they'd care even less than I do. 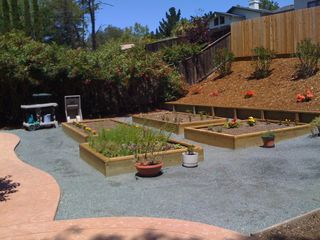 Warehouse 13 on Tuesdays, not that I've watched a full episode yet. Last ep I was busy making sure Hez didn't jump and than fall off of anything - she went to the vet and had to get a tooth pulled -the vet said she fought the medication and she was really, really woozy when she got home. As in falling down woozy. Do you think she would curl up and sleep it off?  Of course not.

Eureka is back on Fridays but my taped first episode had no sound!! Grrr!

And that's the after the remodel and right as we planted the beds - look how small everything but the herb bed is! Big difference now. I love the curved walkway.

I might have to watch Burn Notice and finish up the latest *Harry Dresden book all by myself tonight-it's possible Hezekiah is so disgusted by the visit to the vet and the subsequent antibiotics that she's going to look for a nicer home.

Bet they won't have flowers like that there. The bush of flowers are sonatas - I think they're supposed to be thinned but I was afraid they wouldn't grow.....the piles on the walkway is the oregano harvest.  I'm saving the pictures of the melons and the eggplant so you'll have something exciting to look forward to. 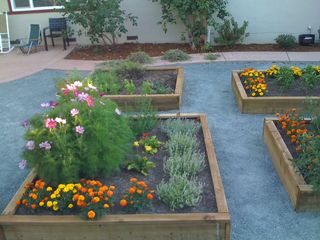 No picture of Hez - the latest one looks utterly adorable with her big drugged eyes but she was SO! MAD! at me that I don't want her to find out I snapped a picture while she was under the influence. She has a reputation to maintain, y know.

*Either Harry is on his last adventure or Jim Butcher is rebooting the series. (That is not a spoiler, it's speculation. I did kind of read the ending - it was late! and I had to know! but darn it, skipping around like that meant that it made no sense. It's probably a cliffhanger. [said sneeringly. I loathe cliffhangers] [but for Harry........anything.]

Flower pictures? What's wrong with you? I did a double take when you said that picture had snow in it. That is not snow. Trust me.

You caved on the Dresden book, huh??

Can you believe that I am actually current with a tv series? *waits for Carrie to stand up again and get some ice for her head*

Wow your garden looks really different. The flower beds are beautiful! I like the thick bush of Sonatas!

Well, I for one enjoyed your post! The garden looks beautiful.

Give Hez a pat from me.

Oh, wow! The yard looks great. What a lot of work!

This just gets spookier and spookier. Were we separated at birth? I have been reading up on growing herbs and have asked Bob (when he's better) to put some raised beds outside the back so I can do some planting.

"Changes" is only out in hardbound, so I haven't bought it yet and "Ghost Story" is due next March, so I don't think Butcher is done with Harry.

When are you coming to do my backyard? That looks great.

Nice looking garden. I had no idea you had a green thumb. Does the trip to the vet mean that Hez officially has a hole in her head? Poor sweet girl.

It looks very nice!
Our yard is badly in need of a makeover but I am studiously ignoring it.
Ha, the cats keep opening up one of the posts in the fence in our yard too. We are some kind of cat superhighway.

Your yard looks fabulous! I hope you didn't do all that yourself. I spend an hour weeding and I'm ready to collapse.

Very nice of you not to post Hez's stupor picture.

Your planting beds are beautiful.

What about Haven? It seems promising. Plus there's a pretty boy in it which makes everything better.

Kiss the kitty for me!

Looks great! and easy to enjoy. (and I see the snow! looks like snow to me! more than we got, if I don't count the car with 6 inches on the roof I saw in the work parking lot)

Nice transformation in the garden, wow! No snow you say, I couldn't deal with that, I love it!!!

Hez, you will feel better soon, sorry about the owwie!!!

Hugs to both of you, G

Carrie- Your patio looks amazing, and I WANT some of those raised beds.

What a beautiful garden! Well done on the yard :-)

Do you grow fruits and veggies, too? Or only flowers? I can't quite tell from the picture.

Ooh, hadn't seen that there's a new Harry book. Must visit bookstore. I'm woefully behind on all television shows, as I've been out of town and/or too tired to stay up for them, but I need to get back in the swing of things. And finally, I approve of the casting on of kilt hose (if only so I can live vicariously).

Yes, I'm a happier person now thanks to Mad Men. And there are some pretty good shows coming out on HBO - Boardwalk Empire being one I'm looking forward to.

And go for the kilt hose, if you haven't already. You know you'll meet no resistance from me.

Your garden looks lovely. My husband loves Warehouse 13. We don't have a TV so he watches it over the computer on Hulu. me, I prefer Glee :)

Wow, what a great garden!

Every now and then they'll show an episode of The Closer over here. I'm starting to get into it, but at first, I found Brenda's accent off-putting. A little too Southern.

Oh my goodness, what a very nice yard re-do! Very lovely. I haven't read any Jim Butcher but it is nice to know of a series I can start. I've been reading the Sookie Stackhouse series.