According to Carrol the term uffish suggested to him "a state of mind when the voice is gruffish, the manner roughish, and the temper huffish."

(from Through the Looking-Glass and What Alice Found There, 1872)

`Twas brillig, and the slithy toves
Did gyre and gimble in the wabe:
All mimsy were the borogoves,
And the mome raths outgrabe.

"Beware the Jabberwock, my son!
The jaws that bite, the claws that catch!
Beware the Jubjub bird, and shun
The frumious Bandersnatch!"


He took his vorpal sword in hand:
Long time the manxome foe he sought --
So rested he by the Tumtum tree,
And stood awhile in thought.


And, as in uffish thought he stood,
The Jabberwock, with eyes of flame,
Came whiffling through the tulgey wood,
And burbled as it came!


One, two! One, two! And through and through
The vorpal blade went snicker-snack!
He left it dead, and with its head
He went galumphing back.


"And, has thou slain the Jabberwock?
Come to my arms, my beamish boy!
O frabjous day! Callooh! Callay!'
He chortled in his joy.

`Twas brillig, and the slithy toves
Did gyre and gimble in the wabe;
All mimsy were the borogoves,

And the mome raths outgrabe.

Somehow, I suspect my knitting WIP's are outgrabe. 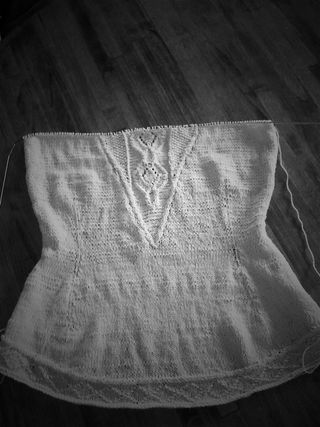 Here's Elizabeth I to date. Hmm. Black and white is not kind to my two gauges - one knit and one purl. I did try using two different sized needles but that's where the difference shows the most. Oh well. it'll either block out or not. It's pretty.

I've got an insane intarsia project going - I figured no sense in knitting up a gauge swatch (which is possibly my usual supposition) since it's basically a big rectangle. I'd forgotten to take into account that patterns for cross stitch don't necessarily translate into patterns for knitting. I've reworked it a bit so that the sword point doesn't look like a giant blob (which you're not going to be able to judge for yourselves because my camera (read: iPhone) decided to die and I ripped & fixed it rather than wait and snap a pic for posterity.)

Other than that, all other projects are ongoing, the stash busting cardi, the tailored jacket, the scarves, the Veronica Lake shell, the keyhole shell, Lillian........huh. No wonder my WIP area looks like this: 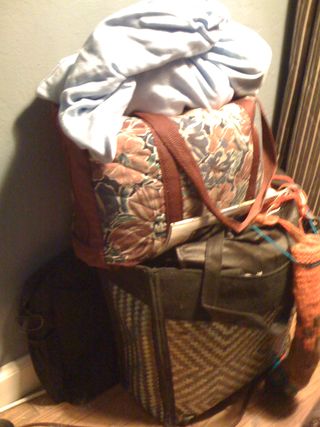 There's actually more, but it's too embarrassing.

I don't think I've done a book update in ages. I managed to read 59 library books last year and.......32 so far this year. It helps being broke.

Best books so far: The Emperor of Ocean Park by Stephen L Carter. The novel is told from the point of view of the son of a judge who at one time, was a nominee to the Supreme Court, and at his father's death, become embroiled in what derailed his father and now threatens him.  More or less. Great suspense book and if you like politics, you should love this.

The Big Short: Inside the Doomsday Machine by Michael Lewis. So that's how the economy collapsed.

Mary Stewart novels, Nine Coaches Waiting, The Ivy Tree, Madam Will You Talk? Moon-Spinners, The Gabriel Hounds. I hadn't read these in decades. The Moon Spinners title is based on an island myth about the phases of the moon - as a wannabe spinner, it was fun to read that the full moon glow was twirled onto a drop spindle causing it to wane then the spindle was plunged into the ocean where it  unraveled and filled the moon again.

One thing that struck me is how dumbed down our vocabulary has gotten since these were published.

And in the spirit of dumbing down everywhere, a few of my favorite summer shows: Too Hot In Cleveland (Wednesday night at 10pm on TV Land) with Betty White, Jane Leeves, Valerie Bertinelli and Wendy Malick. Fun.

Warehouse 13 starts tonight at......9? 10? on Syfy. (Ridiculous name for a channel. And oddly enough, most of the shows I watched used to be on SciFi. This (and Eureka starting Friday) are the only two shows I watch on SyFy.).

Burn Notice on USA 9pm on Thursdays. I really like the addition of Coby Bell, I've missed him since Third Watch. Jason Wiles, aka Bosco of Third Watch is on Persons Unknown on Mondays NBC at 8pm now (and soon to be Saturdays) but that show is so convoluted and dull that if it wasn't for the cast, I wouldn't bother.

Ooh, lots of good things in this post! Elizabeth I is coming along very nicely. I bet that blocking will do the trick with the (very minor) gauge difference.

I loved Jabberwocky when I was little and went around reciting it at my family!

Thanks for The Emperor of Ocean Park recommendation! Glad to hear you're enjoying the Mary Stewart novels. They're a little frothy, but I love the settings for the books and the combination of romance, mystery, and suspense. There just aren't books quite like that anymore. I haven't read The Gabriel Hounds or The Ivy Tree yet.

Just thought that I'd mention that I'm enthralled by Cutting for Stone (by Abraham Verghese) right now! It's definitely a more male-oriented book, but I'm entranced by the Ethiopian setting and the richly drawn characters.

Your tension issues will most likely improve every time you wash Liz I. I like your book list.

Hmmm, maybe I need to send you some books.

I don't know who Coby Bell is, but I'm loving the 3rd season of Burn Notice (on DVD).

I can relate to the difference in knitting and purling gauge!!

Besides the library, don't you have a good stock of unread books lying around, too??

On the cross-stitch patterns... Sally Melville said in a class that if you wanted to knit from needlepoint charts and get the right proportion, you should photocopy the charts, and then highlight every 3rd row in yellow. Knit those rows twice.

i'm a fan of coby bell myself. i was equally thrilled to see him on burn notice. :)

It will block out enough, even if it's not perfect, it's perfectly lovely. I have had the same thoughts on vocabulary, especially for 'young readers' as I see what my 10 year old nephew reads. The older books are much more complex than the newer one.

Lewis Carroll always gave me nightmares. Probably because they were so vivid of poems.

My Elizabeth is waiting for a while, I have one sleeve and one body piece done.

Jabberwocky is my favorite poem. Ever.

I read all of Mary Stewart when I was young and loved them to bits. SHE never wrote about young women who fall to pieces when things get dodgy and, having grown up in the 50s when all women did was wring their hands, I thought she was wonderful.

I want to make Elizabeth I. It's on my very LONG list of things to do. Yours is loverly.

Loved The Big Short!
And your Elizabeth I is lovely (I will join you in keeping fingers crossed it blocks nicely)
(((Hugs)))

Yay! Thanks for the book recommendations - the Mary Stewart sounds right up my alley. I've been reading the Cadfael mysteries, since finding a complete set at a book sale for pennies.

Elizabeth I is gorgeous :)

I've picked up a load of book at thrift sales - you never know what you'll find!

I love the poems you've been posting lately but THIS is a Carrie post...knitting and books and TV oh my! Nice to see you back friend.

Elizabeth is beautiful and I'm sure the barely noticeable issues you refer to will block out. I love that you have a WIP pile.

I couldn't get through Hot in Cleveland. I'm not sure why. Last year was a banner year for me reading, and this year is much less, but I'm loving using the library so much too! Saves my money for yarn!

I love Jaberwocky! I like that the creature burbles and frabjous is, well, frabjous :) Elizabeth I is quite lovely.

What FUN words! I want to use the word uffish more now, too.

I'm only up to 36 books so far this year, but I'm pretty sure I'll make my unofficial goal of 52.

Love the Jabberwocky! And Elizabeth is really cute.

I don't think it's a bad thing to have WIPs. You'll get back to them.

Carrie- My knit and purl gauge are totally different too.

I have an urge to watch Monty Python....

Elizabeth I is going to be lovely! I've had Emperor of Ocean Park checked out for a couple of weeks and haven't started it. Now I have a CarrieK endorsement I'll move it to the top of the queue.