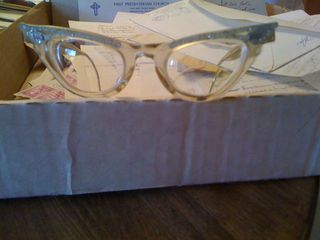 The odd thing about those glasses, if they still fit my head (shockingly, they were too small)  I could use them as reading glasses.

I've been on a Mary Stewart/Jim Butcher binge lately and I think I'm done with both. Mary Stewart's earlier works are more my line - the romance, which they all seem to have somewhere is nicely sidelined. [editor's note: Romance. Pah]

I'm equally kind of "pah" about  the latest chapter of Harry Dresden. Seems to me that it's no longer going to be urban fantasy. Argh. I don't want to spoil if for anyone but I do want to rant. Email me.

Photo: above: Circa age 7, fashion plate extraordinaire, below: baby cantaloupes. I'll refrain from asking if you like my melons. Josephine by Andre Castelot B 1967. Technically this is a Still-Reading although possibly destined to be a Did-Not-Finish. The library is still letting me keep it so I might get back to it. It is a revealing peek at Napoleon and Josephine's household but she seems to be the epitome of silly.

The Two Minute Rule by Robert Crais L M 2006. A stand alone book by the Elvis Cole author (oh and a few TV series), Max Holman, ex con, wants nothing more out of life than to go straight and reconnect with his grown son. An old fashioned upstanding bank thief, he wants nothing more than to get to know his son but naturally, fate gets in his way. Aided and thwarted by a former FBI agent, he does just that.

Confessions of Catherine de Medici by CW Gortner L N 2010. The Medici legacy rings true in Catherine, but one gets the impression that she would've preferred to love and be loved in return. She certainly took care of her own. A compelling historical fiction that made me want to unearth the "real" Catherine.

The Cruelest Month by Louise Penny L M 2007 Inspector Gamache in another Three Pines mystery. If you haven't met the citizens of Three Pines yet, you should.

Dead Beat Book 7 L UF 2006. Poor Harry works to save Murphy while she's off cavorting w/Kincaid. It's good to be Murphy. 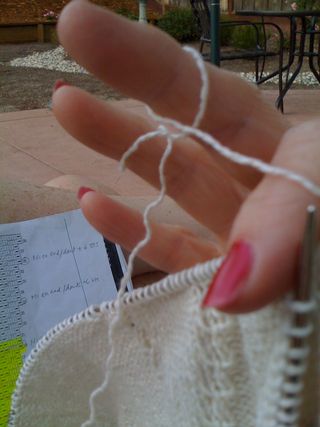 [ Super Crunchers - Why Thinking By The Numbers Is The New Way to Be Smart by Ian Ayers L NF 2007 Thinking by the numbers is new? Pretty good book on the whole but he really wants to start a new catchphrase.

[KNITTING INTERJECTION: Notice the convoluted cat's cradle of yarn? I'm knitting w/Hempathy and in order to get the gauge I need, I have to knit right handed (the "throw" method) and I actually twine it around my fingers even more than that photo shows.]

Small Favor Book 9 by Jim Butcher PB UF 2008 This was fun. I always like it when the one hounding the hero has to come crawling to him for help. [Crawling may be overstating it.]

The Gabriel Hounds by Mary Stewart L M 1967 This novel is set in Damascus with the legend of Lady Hester Stanhope as the reference. Charles and Christy's aunt Harriet  has styled herself after the legendary Lady and Charles is a bit wild to visit the old girl. Christy steals a march on him and her night turns into a gothic tale complete with drugs and murder. The Gabriel Hounds of the title is a matched pair of ceramic hounds that Charles liked as a child and his aunt promised him. Dogs figure prominently in the novel and the ending made me cry. Sweet. Even if it did also involve a thankfully brief romantic interlude between the two second cousins.

The First Rule by Robert Crais L M 2010. The second outing featuring Joe Pike - now Joe is my guy but I almost wish we'd left it to Elvis Cole to define him. I'm not sure I wanted to know he had nightmares. Here he's defending one of his former crew and a baby, against the Serbian mob.

What Kind of Book Are You?

Exciting? If by exciting you mean terrifying. Exciting is wildly overrated. I would appreciate some dull. And a little heat.....the tomatos won't ripen. Any exciting plans for the weekend? What's a good movie to see in the theater? I haven't been in ages. Inception, for one, yes?

I had the same glasses at 7. Further proof that we are twins.

I just read The Gabriel Hounds and The Ivy Tree, and they just didn't do it for me! I feel like Stewart was trying too hard to be hip and up-to-date. The cousin thing was very creepy (and the drugs! omg, the way pot is described is so odd), and the "misbehaving" aspect of The Ivy Tree was also weird. That said, I was reminded of just how beautiful salukis are!

Those glasses are awesome.

i'm waiting on reading Changes until the next installment comes per the advice of a friend. now i'm wondering if i should just read it. advice?

I cant help on the movie front, but I would love to hear your take on the last jim butcher. My husband s much more into that series than I (I like his other series better, oddly), so you wont ruin anything for me. Also, with you on the romance...

What a shame those glasses are too small. They'd be awesome as readers.

You have lovely melons. Take that as you will.

I like some romance in my mysteries and fantasy, but I don't require it.

And I've been reading the Georgette Heyer mysteries, nice whodunnits, and yes romance intrudes, but, it's the kind when someone asks someone else to marry them at the end of the book without much in the way of snuggling.

I think the melons need a little heat too. You can have the heat, but keep it over your way!

Thanks for not posting spoilers. :)

I was fortunate enough not to need glasses until 8th grade, just in time for the octagonal tortoise shell look. My niece actually ordered herself some frames like my old ones from some retro eyewear web site. Really made me laugh. But my best friend had a pair like those (and another in pink with MATCHING BARRETTES!

I had glasses rather similar to yours in, um, sixth grade, I think. Go, us!

Not the most attractive glasses, but I am sure that they looked lovely on you.

oh those glasses bring grade 3 to mind,my first pair pale blue!!! hope the weekend is wonderful.hi to hez too.

However, MY glasses from age 9 were RED!!!!!! with rhinestones (and I have the school pictures to prove it).

Your fingernails look pretty in that photo! There are compensations!

Have you read the Josephine B trilogy? It is a fantastic series, and you wouldn't think Josephine was silly if you read it :-)

Is it sad that I can recognize that chart just by looking at it? Yes?

I'm "Realistic Fiction"
Hmm...
I, too, love your melons!
;)
And that's the way I hold my yarn all the time.
Yeah, when did we stop thinking by the numbers? Oh..right. Somewhere in the past 30 years we decided to teach to standardized tests, and our educational system went to pot.

The tomatoes will ripen now that you've expressed your dismay! (that's what they usually do in my world anyway)
(((hugs)))

And another odd thing about those glasses is that they have become stylish again!

OMG I LURV those glasses!!! EEEeee! Do you have pics of you in them? Hmmm?

I thought that was an Eliz chart back there and then scrolled....very cool. I knit mine in VY yarns and have hot flashes if I wear it. Great. Nothing like a sweaty broad in a close fitting garment. HA!

Love your monthly reads. I am inpatiently waiting on the last book of the Chronicles of Thomas Covenant to finally come out in Oct. By then I will need to read all of the other 7 again!!!

Carrie- They sell those frames in vintage shops for a fortune.

I'm a mystery book. Huh. I would have thought a nonfic. Your nails look fabulous!

How's the Hempathy to knit with? I've been coveting a sample sweater in it at my LYS for years and just bought the pattern but not the yarn yet.

I had those glasses (but in pink) for some of the most formative years of my life.... :D I was actually looking for a (larger) pair for my new reading glasses but no luck.

What are you knitting?

I love those glasses, all my glasses were really boring. Well except maybe my Strawberry Shortcake ones in 2nd grade.

Your garden pictures make me long for a garden again, maybe I could just go steal produce from the neighbor.

Oh my, Carrie is back full force it would appear!! Simple pleasures this fine day!

I LOVE your melons.

I've got Hempathy to do a summer sleeveless top but after that picture I'm a bit scared to even attempt it. Wowza.

My specs from that time were navy blue with a white pinstripe around. Darn things were sturdy, lasting far too long.

Thanks for the words on the Medici book; I've been thinking about starting it.