Our library system offers ebook downloads. There's even a nice little app for it too.

So far I've spent untold hours trying to get an audiobook to freaking download.

Evidently it doesn't support WMA files but only MP3's. So why won't my MP3's download? And isn't the app supposed to support the WMAs? WTH is a WMA anyway? No, don't tell me. At this point, I do not care. Not that it matters, I have something like 400 unlistened to podcasts to listen to and 12ish hour work days for the next week but it's the principle. 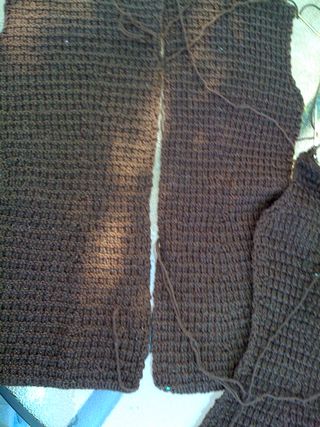 Elizabeth I is up to the armscye decreases on the second haf! w00t!No pix, they all came out looking yellowed and wonky. Fluorescent lights are not kind to Hempathy.

I managed to suck it up and weave up 3/4's of the middle back of the Tailored Jacket before I decided that it was way too much seaming and too darn hot outside - what happened to my nice cold weather? 90 today and 94 tomorrow? I liked the temp in the 70's. I need to move.

You can see how carefully I wove in the ends while I was knitting. I know you're supposed to block the pieces first and then seam but I made it intentionally too big so I could full it a bit for warmth and a cheat custom fit. It would probably be a good thing for the seams to shrink about the same amount as the pieces.

People have alternately been amusing and annoying me. Mostly annoying me. Learn. To. Drive. People. If you're lost, don't slow down and look for the address from the far left lane!!! Don't dive across three lanes (cutting me off) then dither about making the light so that we both miss it. It's possible that it's hormonal but it's also possible I'm going to smack a total stranger in the head with a 2x4.

Adrienne Martini's SweaterQuest: My Year of Knitting Dangerously was interesting. I knit Mary Tudor and I didn't find it all that dangerous. She spent half the book questioning if she was knitting an Alice Starmore if she didn't use the wool Alice did originally, something that never occurred to me. If I changed the style (pullover to cardigan) or the shaping (waist shaped and set in sleeves) and used her charts, I'd still call it an Alice Starmore. Have you seen her colorways? Amazing. Now Alice might take one horrified look at the sweater and disavow it, but that's her perogative. Adrienne also seems to dislike her for her ferocious protection of her name and brand but even that makes sense to me, if slightly counterproductive. It's a cold cruel world out there. Filled with nice strangers. (And the occasional one with a 2x4 indentation). The Two Lives of Charlotte Merryweather by Alexandra Potter was cute, if a total trifle. Thirty one year old control freak Charlotte has a chance encounter with her 21 year old self over the course of a week (or possibly more, I admit it, I started skimming it when I realized it was basically Charlotte dithering over her choice of men and career, as if at 31 the whole game is over. Hardly). She tries to protect her younger self from bad decisions, her younger self teaches her who she was.

One Step Behind by Henning Mankell is a later outing in the Wallender series. I had just caught Kenneth Branaugh's version on PBS the night before I picked this up on Gale's reccomendation. Nice and psychologically driven.

Warrior's Don't Cry: A Searing Memoir of the Battle to Integrate Little Rock's Central High by Melba Pattillo Beals. Searing memoir is right. I've just started this so I'll say more on it later, but I'm only a few pages in and her life is making me cry in both rage and fear and sympathy. I cannnot believe what she and eight other teenagers had to endure just to go to a good high school in 1957. Unbelievable. Adults. Parents. Teachers. Students. Not to mention what she, her family and every person of color had to deal with on a daily basis.  I hope we've come a long, long, long way from there.

Can I borrow that 2x4 when you're done with it?

And I have no problem with Herself defending her name, designs, etc. I have a problem with the fact that she talks smack about everyone else and thinks she owns the Hebridean landscape.

But I'm really tired and that could be affecting my judgment. Which I lack. Totally.

Love the Hez shot - she is so fluffy!

Only problem I have with her Worship is that she doesn't tell me how much yarn she gives me in her kits and how much yarn I need to do her designs.Yes, I want proof that She's given me enough.

You do realize that if you continue to wish for cold weather that you will have no more ripe tomatoes for Hez to sniff. Just saying (as we will get teen temperatures this weekend during the night and garden season is officially over).

It IS the principle of it.

Oh yeah. Tomatos. I do love garden tomatos. But.....wool is so nice to knit......and its so hard to sleep in a house when its practically 80 degrees. Teens? Both jealous wow. Thats cold. Some nice wool slouchy socks would be toasty :)

Our library has two systems from which you can download audiobooks and e-books. Only the MP3s can go on iPods and there aren't many titles available in MP3. The e-books are readable only in a proprietary Adobe application for which there is no mobile app compatible (despite one of the services having a mobile app). It sucks! I hope there is a better solution for libraries soon!

SiL, we now have more in common than just your Brother.
I found out today that my dad died in a Texas hospice Sept. 30.
I feel worse for your loss than mine.
Take care,
SiL

Oh a new Wallendar!! I love those books, but I have to say, I didn't like the Branagh series very much. Perhaps I liked the books too much. I do audiobook downloads all the time. WMA is a windows media file format. Can't play on ipod, but the MP3 files will. Is it netlibrary? I had a problem with downloads initially, I had to save them to the desktop, then start to play them in Itunes, then I could save them. Strange, but works.

Forgot to add, I don't use the app. It wasn't working right for me, just did it the old fashioned way. Kinda.

That sweater book sounds painful. Is she one of those new school knitters for whom every stitch is full of the dramaz?

I'm watching the Branagh version but not caring for it. I can't decide if it's the stories or him.

Oh, and try a lead pipe. 2x4s don't make the impression you're most likely going for.

I haven't tried downloading any ebooks or eaudiobooks from the library. Since I'm not taking a driving trip this year, I haven't been sufficiently inspired. :)

Miss T just loaned me Sweaterquest, but I haven't cracked it open yet, got totally sucked into the whirlwind that is Emma Donaghue's Room.

Oh, me, too! Sometimes I think we really have come a long way, and then sometimes I despair and think, not so much. Talk about the need for the occasional 2x4 :)

It's cold here, and gray, which, me being me, I'm OK with, but it does make me wonder when summer's coming...

At least you'e one step in the right direction. Our library is probably a good decade from offering free downloads of anything. They also don't carry graphic novels, which are too darned expensive for what they are. Bummer.

Carrie-Hez is looking lovely and fluffy these days.

The tomatoes set off her fur-

I gotta tell you -- .WMA is a Windows Media Audio file. It's pretty common but MP3s are more common and have a wider compatibility. I've gotten into ebooks as in books you read on an electronic reader. I don't have any bedside lamp for reading so once I got my iPad I started downloading books and reading on it. The backlit screen doesn't seem to bother me and I can read in the dark!

I like Kenneth Branaugh but I just couldn't get into Wallender. I hope it has cooled off there by now. At least the heat is good for all those lovely tomatoes.

Hez, you rock, I can see those wheels a turning...

Speaking of wheels, I know of what you speak, out on the roads.

Great picture of Hez! Such a pretty kitty.

I thought Sweater Quest was annoying. Lots of people knit Starmores without all the angst. I'm sure Alice would love your MT.

Sweater Quest was very annoying. I'm sure AS would love your MT as well, and I really doubt she's the tyrant she's made out to be. Besides - if you designed the way she did, wouldn't you want to protect it?

Hi Hez! Man, you sure are cute!

I'm not familiar with Wallender.