Doesn't Everyone Name Their GPS? 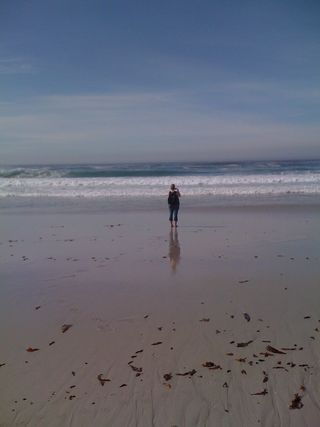 And then I bemoaned his *absence so much so that Chris, visiting the West Coast, was concerned that I desperately wanted someone else riding shot gun.

Nope! I actually saw Mill Valley for the first time because she was convinced that it existed, unlike me. I was convinced that some twisted developer had nothing better to do than build houses on corkscrew corners that went down and down and then up and up and up. And lead directly to Sarah Winchester's door. As it turns out, there is a Mill Valley. And Joe's Tacos are pretty good.

(*It took longer than I thought to update the map. As in hours more.)

I am a slave to technology. How did that happen?

Note to the man on the Bay Bridge this morning: if you & your wife are having trouble - STAY THE HELL OFF THE BAY BRIDGE. Unless you're going to jump. Jackass. They need some special circumstance to add to these sentences. Use a gun, go to jail. Tie up traffic? - Execution? Works for me. At least this guy was just out for himself. It really makes me crazy when protesters do things like that to "draw attention" to their cause. Why would screwing around with me make me give a flying fig about your cause? And what makes you think I don't already know about it? I have troubles of my own.

Oh wow. The little dog was found and returned to his owner. (Pilfered pooch! Why didn't I think of that?) That made me sniffle. 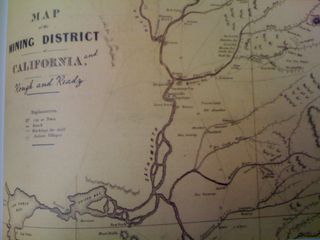 Check out this old California map that shows Pittsburg, CA back when it was called New York. (It's along the delta, bottom left/center.) Y'know, right around the time Rough & Ready declared itself a state. But then they realized - they couldn't celebrate the 4th of July. So they rejoined. I might be reading Lost States: True Storis of Texlahoma, Transylvania & Other States That Never Made It by Michael Trinklein. Who knew that Thomas Jefferson had a thing for "ippi" endings? This is a great book. (I may have a thing for trivia).

Yeah, other than that, I've got nothing. Not much knitting going on, I'm just trying to keep working on WIP's and Not. Cast. On. So hard. Not even much TV (other than DWTS which I probably shouldn't admit). (Go, Kyle! Anyone but Jennifer).

Seriously. I thought he was a real person for an hour or so before I finally asked.

I've named my GPS. I'm pretty sure Chris knows this, so I'm not sure why she would have been surprised.

OK Winchester Mystery house for sure on my next trip to CA. And a cautionary tale for our current home rehab work.

Oh, GPS. I used one this summer. At times it said I wasn't on a road at all, other times it totally misidentified the road I was on. Not so good at finding the backroads.

So what IS his name?

Oh, and your link to Chris is wrong (it's to your blog). But that's OK, I know where to find her.

Carrie- You guys went to the Winchester house? Wow.

I know someone who calls their GPS "Bitch in the Box".

My one Christmas request is a GPS for the car. Let's see how closely everyone has been listening.

I feel similarly about the protesters tieing up traffic. Not going to make me sympathetic to you, no. I suppose they want a way to put their cause in a place you can't miss, but my irritation (sadly) will overwhelm my concern.

I've got the casting on bug myself; I've managed to successfully avoid it so far, but the fact that I've got a skein of yarn and a fully-prepped pattern laying out is a signal that once I'm done with this hat, anything could happen.

I LOVE the mystery house!

& you were picking on my for naming husbands! :p

No GPS to give a name to. Husband wouldn't trust a woman for directions anyway. We usually have a couple of phones on Googlemaps or Mapquest.

I don't name electronics. Never even thought about it. I think you are strange. ;)

I love the name Lee - is that so you have some lee-way about where you go? :)

I've always wondered about that mansion. It sounds so interesting. So many people were "take in" by the spiritualists at that time. So sad.
Happy knitting on your UFO's!

You have got to be kidding - Chris about an hour from me and I missed it? And the Winchester Mystery House is totally worth it - they even do birthday parties there!

My GPS is actually Verizon's Navigator app, so I've dubbed her The Navigatrix.

I'm with you on the not casting on!

It's hard not to keep adding new projects to the pile, isn't it? At the same time, there's real satisfaction in FO's!!! I've been blocking and sewing up a storm here and it's great. I hope you and Hez have a great weekend and happy kniting!

Hmm. I don't have a GPS so haven't had the opportunity to name one. That books sounds like fun!

I have a GPS. I don't even know how to turn it on, much less love it enough to name it.

Thinking of your Elizabeth and Tudor Roses, I have purchased Herself's "Aran Knitting: and am actually reading Her side. Now I feel crummy for having been so judgmental. Does this make me a hypocrite?

Oh wow, I'd love to see the Winchester house one day!

I name nothing electronic. I do name my bike though. This year, she's been called "Neglected". Neat, huh?!

Is that Chris in the 1st picture?!