Her Imperial Majesty is not receiving visitors 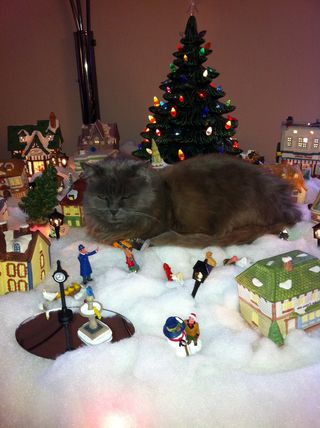 ......just now, but she is collecting New Year's Resolutions/Goals/Hopes/Fears. Please leave yours with her minion, below.

(Crushed below, as it is, but what are minions for?)

Behold the knit on puffy sleeve. Marvelous, I took a picture of the good side. The back checks are off a row. I still can't decide if I care. After all, I've worn puffier clothing. I went through a sewing phase (back when I still did any sewing) where I made a number of tops/blouses out of wedding dress patterns. (I like wedding dresses. I just don't like wedded bliss. Since it mostly wasn't at all blissful.) 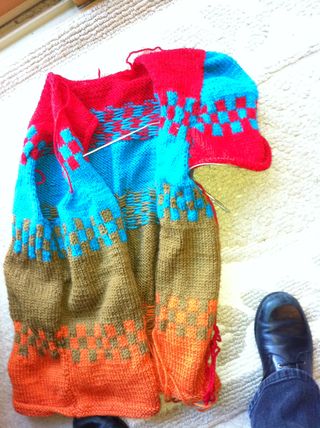 Okay, there's a picture of the back. Too off? I can always knit it flat. Then I can use a two color braided cast on. Undoubtedly I'll finish knitting the whole sleeve before I decide I can't stand it, rip and redo.

CHRISTMAS/HOLIDAY MIRACLE STUFF: Or links. Stacey is having a contest to support Collin, who is having heartbreaking problems with Neuromyelitis optica right now and/or fellow sufferers. Just donate, don't read. It'll make you cry. He's so darn cute too. Contest/Drive ends December 31.

Chris, aka the Evil One, sent me a link for this contest: The Secret History of Elizabeth Tudor: Vampire Hunter. Contest ends December 22. 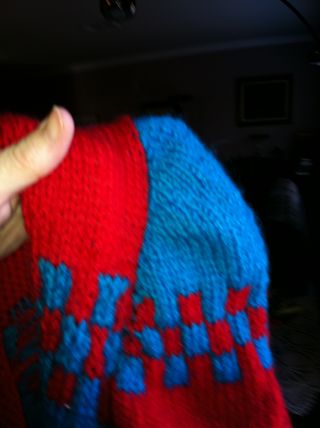 Vampires! Argh. I've been boycotting them. But Elizabeth Tudor. How can I resist?

I can't. It's shameful. Don't tell anyone.

READING: (Not vampires, I assure you. Until I win the contest.) I just finished London by Edward Rutherfurd, I liked it, I was a little unnerved to realize I started it November 28th and finished it December 16th (I'd say "yesterday" but who knows when I'll actually post this) and I'd been carrying it around, picking it up and putting it down for a week. I'd lost impetus, the sprawling nature of it makes it easy to walk away from it and by the end I would have really appreciated a genealogy chart (googling didn't turn one up). I couldn't keep the Barnicle's, Bulls, Carpenters, Doggetts and histories straight - except for the webbed fingers and actual names. The Merediths, Pennys and Silversleeves were pretty straightforward but I liked old Silversleeves much better than his descendents. I did like the conceit of following the few families throughout London's history, from the Romans to the Blitz. (Actually, pre Roman. Sorry).

It was a bit like a tour bus ride - lots of short stops for some familiarity with the terrain and the background, but no real depth.

Luckily it was the historical bits were what I found the most fascinating and kept me reading. The storylines were sometimes mercifully brief (like I said, all the descendents of Silversleeves except for his sons, whose stories I enjoyed, distasteful as they personally might have ben, were sleazily dull. You'd think that Hilda's genes might have made some impact) or too short. I'd've loved to read a bit more about Henry Doggett, paternally cheeky of him to send off his son into the Lady St James arms or to discover what came of Elfgiva and her capitulation. I'm not even sure if the book followed her line. I wanted Vilolet to appreciate/acknowledge her mother's life. Hmm.  I can't even think of half the characters that showed up. All in all, not a bad read. I was absurdly happy that they unearthed Julius's lost treasure finally. Too bad the legend of the lost treasure hadn't stayed in the family lore.

Gift basket from the landords! Huh. it posted way down. Grrr. I knew I'd delete it. 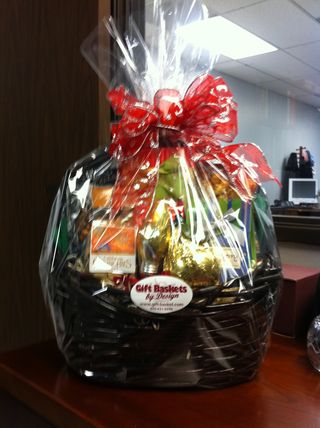 Ha. There it is. It's still intact, I have plenty of sweets at home to eat. What I'd really like is eggs and bacon, which I've been craving ever since the annual building's holiday breakfast went from eggs, hash browns, bacon, fruit, muffins, etc to fruit & muffins last Tuesday. Traditions, they must be kept alive. Particularly if they involve bacon.

Eating eggs & bacon at Black Bear Diner on Thursday didn't satisfy the craving either, even if it involved a biscuit the size of my head. (Warning, that link has birds twittering and the sounds of a babbling brook) but the good news is, no robbery occurred. (There've been a rash of restaurant robberies and one took place there). 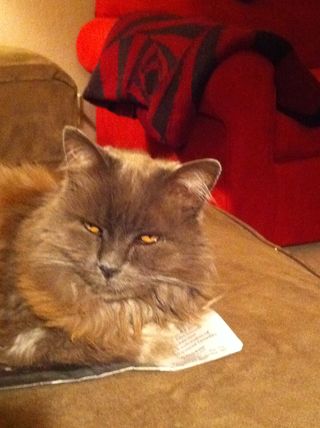 "It is raining outside. Make it stop. And no, you can't have your paper back."

Fat chance, Hez. I like the rain. My current working theory is that global warming has been caused by all those chirpy weather forecasters gleefully announcing "It's another beautiful day!" when the sun is out and dolefully "We'll have some bad weather today" when it's not. Thoughts are things, you know. 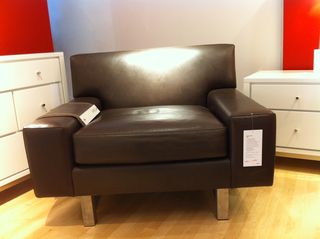 This is the most comfortable chair EVER. Want. It's a perfect reading/knitting chair. There's no where to put it but details. 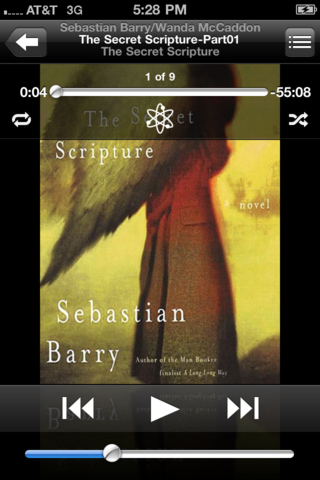 I'd ask for it for Christmas but Santa would need to put an addition onto the house.

The Times We Are Living In is having a contest for a calendar of her photos, which are amazing. Quick, enter, or at least go check out her pix. You have until midnight December 20th to enter the contest; a blog that inspires you but one that you don't comment on, and commenting on it in the next month.You have an unlimited time to check out her pictures.

READING/LISTENING: I finally downloaded an audiobook from my library! Frabba joy! I might actually be able to download an ebook some day. I've had The Secret Scripture by Sebastian Barry on my TBR list for awhile.

Still reading London by Edward Rutherfurd. I've got about 150 pages to go........but I don't care much anymore.  Enough that I want to finish it.........but so far, not enough to read more than a few pages a night before wandering off. What I'd really like is a geneology chart on the families. I'm losing track.

There's not much KNITTING but a LOT of Not Finishing/Frogging. I'm going to have to knit those sleeves flat & sew them on. I have to figure out how to make the top less retina searing - maybe I'll flip the colors on the sleeves. I'm about 3/4 the way done on Mim's Flutter Scarf and no where near done on any other scarf/sweater/bag/glove/knitted object. 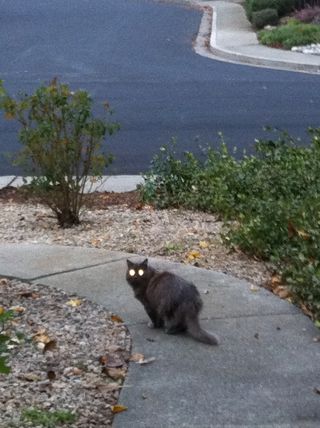 Uh oh. Someone wants to know - Kirk or Picard? Santa Claus or The Grinch? 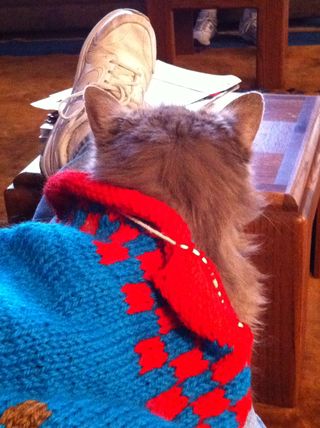 It feels like a new year. I can't decide if I should make resolutions (which I'm making anyway) but should I Write Them Down? Will that help or hurt? Does wondering that mean that I'm trying to assert some control over an uncontrollable life?  Oh yes. Will it work? Yeah, probably not. Magical thinking, it's my mode of thought.

That red in the picture? It's exactly that color. Neon.