Thank You, thank you!

Right before Christmas, (it can't be that long ago), I got this in the mail: 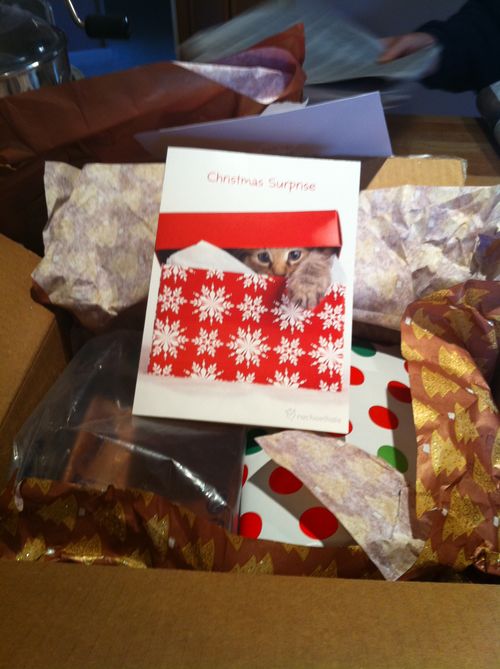 It was a Christmas surprise! From Bookfoolery & Babble. She sweetly sent me not only local Red Pepper mix, complete with its own wooden bowl, thankyouverymuch (sadly no pictures of the cute bowl with dip & pesto crackers in action. It was quite picturesque but it was also quite yummy which totally distracted me from the picture taking) but  also 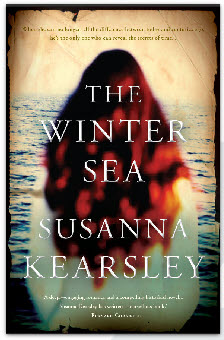 a Susanna Kearsley novel! Too cool because they are hard to find around here.

But there were even more goodies heading my way from other fabulous friends.

Everywhere Knitting sent me a pair of her handknit convertible mitts/mittens in the softest yarn imaginable, in a blue that rivals Lake Tahoe, just because I admired them on her blog. (Who wouldn't?)  She also sent along cinnamon scented spice soap that smells good enough to eat. (Possibly you can eat it but I'm not brave enough to check). 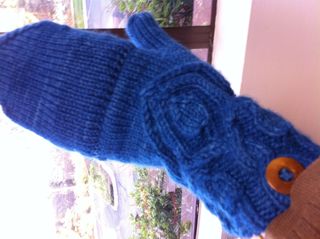 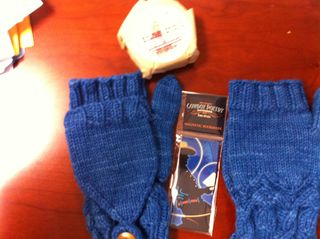 She's off to the Cowboy Poetry Gathering, doesn't that sound like fun? One of these years I would love to attend.

But am I done with the fabulousness arriving in the mail? I am not! I won this calendar of photographs that Rachel of the Times We Are Living In shot - are these shots fabulous or what? (That's a collage of the calendar in case it's not obvious). 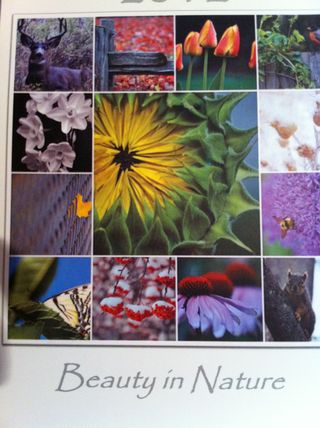 I thought about stealing one of her photos (with permission) (which isn't really stealing then, is it?) but check out her blog and take a look for yourself. Amazing photos. "Her" elk herd is a particulate favorite of mine. I have to say, we have some amazing photographers. Fiber Fool and Landscape Therapy are other faves of mine.

Mom's 74th birthday was last Saturday. There were THREE funerals scheduled that day! Two at 11am. She wasn't super thrilled (I'm sure none of them were wild about it either) but we managed to have a decent birthday for her after all. Went out to Jack's Restaurant afterwards and had a late lunch with an old friend of hers and when we got home, watched sappy Hallmark movies. She'd a bit of an escalading panic attack from her MRI at the end of December but she finally managed to get her blood pressure back under control this last week. Thankfully, because mine was starting to go up. Worrisome parents. Honestly.

In knitting news, there is a glove! Whoo! Naturally, I went a little off pattern because it's impossible for me to follows directions, I think between the Make 1's and the K2tog's is where I went astray. We'll see how it looks next to the right glove - there might possibly be Ripping Back. But there also might be Fraternal Twins, aka Good Enough. 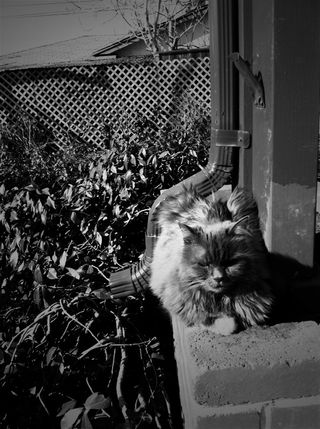 The pattern is really dead simple but it took me having to knit it up to see what she had in mind. I glanced at the chart and it finally "clicked" - I could see the whole thing laid out neatly. Which is yeah, the whole purpose of charts but half the time I've written out the directions (K2, slip one, psso, K5, P3, etc, etc) just because the symbols didn't "take" as much as words did.

BOOKS I read Tana French's latest, Faithful Place. I'm still not sure what I think of it. (Warning: Sort of vaguely spoilerish, but just to be safe, you've been warned. ) While her books are always compelling reads and character driven rather than plot - I think that's the rub. The choices the characters make ring true but they're not choices I wanted them to make. Frank Mackey is the main character this time around. He's pulled back into his volatile family life after 22 years absence when the suitcase of his old girlfriend, who he was supposed to run off with way back then - was found in a nearby derelict building they were to have their last fateful rendezvous.

And just in case it seems like I'm ignoring your email - my iPhone seems to be acting up again. It's not sending out my reply emails somewhat randomly (I do seem to be getting all of them) - it might be because I've been in meetings and seminars in various hotels throughout freaking California (I drove 310 miles one day and had nine hours of cont ed time - it felt like twice that driving time)  but it might be because it's always doing something wonky like that. (I did drive across the San Rafael/Richmond bridge at dawn and at dusk to an absolutely GINORMOUS full moon. I'm hoping all the halfwits that skittered across the lanes to the shoulder were taking pictures and not having car trouble. At least they pulled over.

Ooh, those are some niiiice mittens! You lucky duck!

Happy Birthday to your Mom. They can be such a worry sometimes, but we love them anyway. ;-)

What a lovely package! And I'm blushing from your compliment. Thank you!

You are a lucky lady :) I agree Kristi is a great photographer! Hope your mom's blood pressure is totally normal now.

What gorgeous mitts and delightful goodies! :)

Aw, I really like the art photo series of Hez. :D

Love the shot of Hez. "Knitting on Impulse" takes AMAZING photographs of her Whisler, B.C. environs and the yarn she dyes -- I drool and condemn my current yarn diet and consider moving to snowy climes. Like THAT's going to happen!

So glad you got such marvelous things for Christmas. You deserve them, and dozens more.

I do know what you mean about the choices in Faithful Place, but still, I really liked it. Hope it wasn't disappointing after my big build up. I'm still laughing about the yuppie neighbor who probably had an epidural.

I LOVE those mittens, what a nice gift! As is everything else. Glad your mom is okay.
Hez looks particularly fetching in that photo.
(((hugs)))

I have the pattern and yarn for those mittens in my bag of "things to do". That's one step beyond the queue! Yours are gorgeous. Lucky girl!

Oh goodies galore, I LOVE the blue mittens, gorgeous color and design. What did Hez think of all these packages? Mr. Ched always loves parcels, not the contents, just the boxes.

I've got a new blog, stop by when you can:

Those mittens are great!
I want to continue reading Tana French's novels.

Those mittens are sooo cute!! And, your Hez pictures just get better all the time. Great photo! Darn, I would have liked to see the wooden bowl in action, but it was kind of cool and surprising to open this page and see your gifts. You're very loved, obviously. :)

Hey--thanks...I'm glad you are enjoying the calendar. And look at all the loot you got...I really like those mittens. Do you happen to have the pattern name (it seems like I've seen them before but not sure)?

Looking forward to glove #2 being done and then finished shots! ;)

So many nice presents! And Hez is looking quite content in the sunshine.

What lovely presents. I really like those blue mittens. And Hezekiah looks like a piece of fancy art in that picture.

Hi, Carrie,
I found you on Jocelyn and Sallee's blogs, and I figured if both of them were reading you, I should, too.

Great mittens, and I'm thinking I need to make friends with your friends after looking at all the other great stuff you received!

Warm Hats Not Hot Heads. That wording is a little crucial, isnt it?
Argh.

Csrrie- Books and mittens and cats- oh my!

You are so sweet, especially for not mentioning the wonky seam at the flaps. The mittens are Snapdragon by Ysolda Teague, for those who've asked. They were fun to knit. I'm very glad they've gone to a good home.