Who Wanted the Warm Weather? 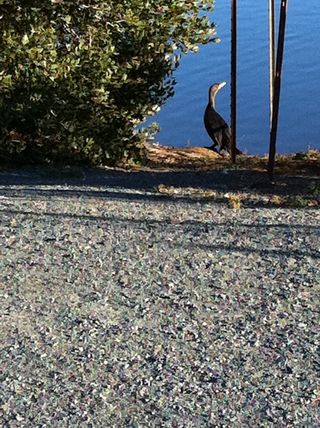 Couldn't you have hoped for working air conditioning too?

There's Too Much Time Left Until April 18th!

Eve in the Evening 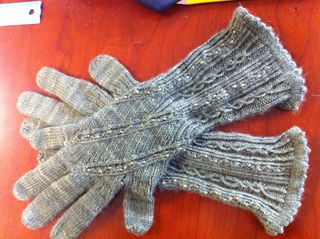 The gloves, they are knit. The pattern is Eve by Julia Mueller and they're sooooo gorgeous, I've been making everyone admire them.

Huh. I can't seem to link Laris Designs - must be the lovely, lovely rainy weather. I'm to blame. I've been wishing for rain all winter and the windows in the office are perfect for enjoying it. Good thing too, since I'm pretty much here all the days that end in "y".

I caved and read The Hunger Games - Does the fact that I stayed up after midnight reading it last Saturday, woke up early Sunday morning & finished it before getting out of bed tell you how much I liked it? I have a bad prejudice against YA, I know not why. I'm 72nd in line for Catching Fire and 51 for Mockingjay at the library - if I had any real time, I'd go buy them. If the 3rd book comes in first, can I read it before Catching Fire or will I be totally lost? I'm already prepared to be unnerved by the direction the storyline takes. 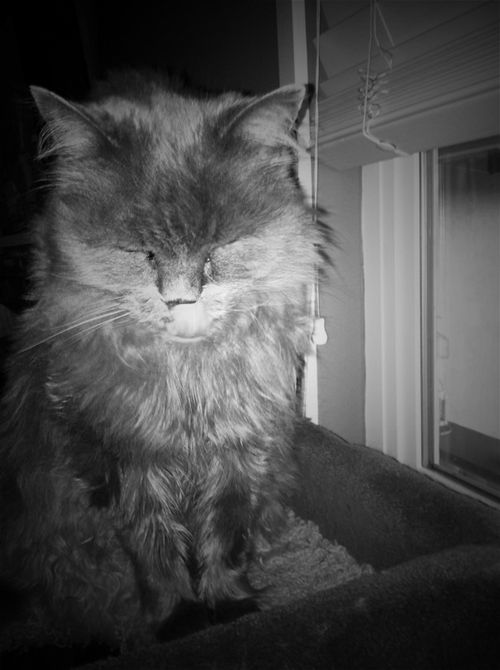 *Title changed because, wow, so hard that I didn't realize that the earthquake in Japan was 8.9 (!?!) and that there was a tsunami here & there?!

I mean, yes, I heard there was an quake and a tsunami somewhat fleetingly, but living in earthquake country, clearly the news is so routinely overblown out of all proportion that I miss an 8.9 quake?

My heart goes out to all those in distress in Japan and here.

Hez thanked me for the tasty snack and asked who I was.

And that was a month ago.

Too bad that shot wasn't in color! There would be a big pink tongue.

So. There's been a little knitting -

I finally figured out the first row of chart 2 on Eve - charts really are a godsend but I couldn't get the new chart to correspond with the old chart in my head (or on my needles)  -(nothing wrong with the charts, mind you) - I finally charted out the last 3 rows of Chart 1 underneath Chart 2. The brain, it needs a little hand holding at times.

The crown on Mom's bookbag looks a lot better this go round with bulkier weight yarn.

The myriad other knitting projects are just *WWOP. If anyone feels like seaming up a tailored jacket in.....six pieces, not counting the sleeves, collar or pocket, give me a holler. Yeah. I'll just wait right here.......holding my breath........turning blue........

READING: Lots of reading. Eifelheim was excellent, once I got past the fact that it wasn't TIME TRAVEL but rather ALIENS landing in 1348 a.d. Germany. (Possibly because I didn't read the book jacket and did read the table of contents? Whenever a book says NOW and 1348 - I just assume time travel. It may be because I have a thing for time travel. And plagues. Only one of which was represented in this book.) (So it's sad, but it's an excellent read).

I think I've already whinged about Tana French's Faithful Place - not because the book was bad - can Tana French write a boring book? but because darn those characters with their own identies, thoughts and lives.

Barbara Breton's Spun by Sorcery was.......well, fluff. Fluffier than the last outing. Bordering on silly - attacking spinning wheels? Sheesh. I can only imagine how much fun the wine, knitting and conversation was during that brainstorm session. (That link is randomly googled but iS that a fabulous name-header- whatsis-thingie or what?)

The Breach by Patrick Lee was an action-packed book. Travis is a recently released convict - his backstory is told throughout the book - hiking through the pristine Alaskan wilderness to consider his options. An airplane crashes nearby, as he races to the rescue, his life is changed irretriveably. Or was it? The book got a little too meta at the end but until then, the Villain was sufficiently villainous, the possible alien interaction was suitably mysterious and the romance wasn't with some brainless twit, thankfully. He did get to carry her to safety while she mused silently at how sexy she found it, but at least she didn't breathe a word to him at the time.

The Winter Sea wasn't quite time travel but close enough. It's written from the point of view of a modern day historical novelist (Carrie McClleland, a lovely name if I do say so myself) and Sophia, her great-great back in 1708 Scotland. I liked the history of the Franco/Scotland alliance for James IV - not an era I'm familiar with and I liked the modern day juxtapostion. Even the DNA memory writing wasn't too bad, although the scientific argument seemed a little superfluous. Possibly it's possible but really, if you're going to suspend belief, it just has to be plausible. More than than Daphne du Maurier's time traveling potion in her House on the Strand. 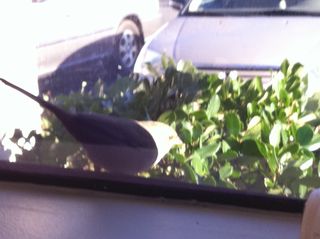 Replay by Ken Grimwood was a different take on time travel and personal growth. It's more of a Groundhog Day idea than time travel, Jeff Winston is a 43 year old radio personality who has a heart attack and dies, only to find himself back in his early college days. He goes about trying to set things right this time, only to die of a heart attack at the age of 43......and again. He meets up with other replayers - okay enough, so as not to give away the plot but I liked it.

Double Spell by Janet Lunn must be a children's book from the 60's but it must be one of the last childrens books to use the word "extant". Twins from the modern day (the 60's) Toronto find an old doll in an antique window and are strangely drawn to it - the shop owner sells it to them for what they have on hand. Spookiness ensues - the twins are having identical dreams of early 1900 Toronto, an aunt leaves them her house, they know the layout of old homes.... I think I liked the treasure/history hunt through Toronto as they tried to piece together what the doll was trying to to them the most. My Mom had family thereabouts and it's just fun to think of where and what they might have done.

Now I'm just mostly getting up, going to work, working until I can't stand it, coming home, going to sleep, lather, rinse, repeat. Even the time off I've taken (and there've been a few hours here and there), feels like more of the same. I should probably get out of the house but Hez is barely recognizing me as it is. Pity party! Bring cake! :) Okay, no cake. But what're you all doing for fun?

*WWOP = Works With Out Progress