Home Archives Profile Subscribe
Shouldn't It Rain Less in May?

At last! The Longest Ten Weeks of the Year Are Done 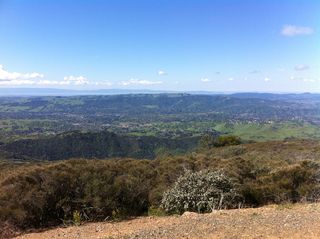 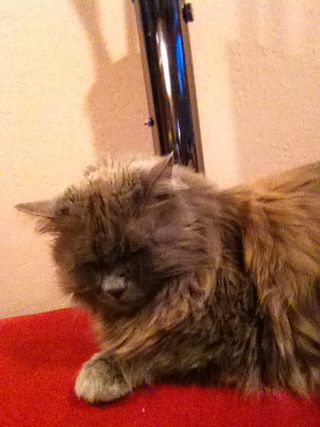 I'm on the final border of my Curve of Pursuit!! Woot!(That's not my CoP, that's Monika's.)

I'm partially frogging/redesigning my Lace Edged Elegance - if a pattern calls for cotton - there might be a good reason. Elsebeth Lavold's Silky Wool is beautiful and feels wonderful but it's not a warm weather sweater and short sleeves are, ah, dumb, in the cold weather we've been having. It's getting long sleeves as we speak and I'm trying to think of what to do with the inset square neckline. A ribbed split collar, maybe.

All My Children & One Life to Live - cancelled! I'm in shock. I don't actually watch them anymore - me and apparently hordes of other former fans - but I was glued to them for a.......hmm. Couple of decades. Yowza. I'll still spot a cast member on other shows and squeal like a cousin made a TV appearance. They were family.

I'm at peace with Detroit 187 most likely getting cancelled - I love the show but the numbers are abysmal - it's been pre-empted umpteen times and the replacements did better in the time slot - ouch. It was quirky but compelling. Now I'm really hoping that Chicago Code makes it. New favorite. (Warning: The site talks but it took a minute).

Chris Jericho should win Dancing With The Stars this season. Maybe Romeo. Maybe.....

The Sex Life of My Aunt by Mavis Cheek was.....eh. Dillys is having her adulterous dalliance and adulterers and mid life crises evidently bore me but Mavis Cheek's writing kept me going. There was just enough personality and truth to the book to keep it somewhat engaging.

Time Spike by Eric Flint & Marilyn Kosmatka was his typical fun romp with semi-serious overtones - his out-of-place worlds - this time, a maximum security prison, conquistadores, Cherokees walking the Trail of Tears with the soldiers on duty and the Mound people of Missouri all end up in the Cretaceous period. It's pretty simplistic but they do try to address the wrongs that have been taken for granted over the years.

Hez sez "Who are you again?"

My sister emailed me minutes after the news broke about about AMC being cancelled. I watched it for 30 years. Alas, poor Erica. Whatever will she do.

I read The Sex Life of My Aunt, many years ago. I'd agree with you 100% if I could remember it, I'm sure. Actually, I do remember I liked her writing and thought I'd give her another chance but didn't care for the storyline. I think. But, I've never bothered looking for any more of her books.

Boy that has been a long time ago. I so regret using mercerized cotton for this blanket. It's heavy and rough, but I still love the pattern.

Welcome back! Time for some fun!

My hubster will be disappointed that Detroit 187 is canceled. So it goes.

Love Chicago Code, I hope it stays, too. I am considering curve of pursuit for a baby blanket. What do you think, would it take forever in a sport wt?

I've been considering that blanket! Thanks for the news on AMC.

Congratulations for surviving! Now hopefully you can enjoy some much deserved extra knitting time.

I have a friend who may never recover from those cancellations.

THAT is an interesting blanket. I may have to add to my queue. Um, thanks? Cuz, you know, my queue isn't long enough.

Hez looks like she did all the taxes and we know better than that!

I am hopelessly hooked to the Y & R. My stories, as my sister calls them.

Aw man, you reminded me again that I still haven't filed my taxes yet!

I need to go to Mt. Diablo, now that I'm so close to it. Hmm, fun excursions in the sun with the boyo. Sounds great.

Glad you made it through!

I've never watched soap operas (well, the daytime ones...you know my addiction to GA) but was shocked to hear that news as well. The world, it is a changin'!

You made it! Whew! I'm very impressed - I hope you're enjoying lots of lovely walks up Mt. Diablo now :)

Yay! Good to hear you made it! How are you celebrating?

Carrie- I, for one, will be relieved to see Erica Kane's swan song.

Have you watched Game of Thrones on HBO? I loved LOVED the books but must wait for it to come out on DVD, no cable/satellite in this house. I am eager to hear how it works on the small(ish) screen.

I'll never forget the summer I spent with Greg and Jenny...

Welcome back to the real world, which hopefully will include lots of fiber! Anderson Valley is still calling to me, though September weather may be too warm. Let's try to make it happen this year!

Not Detroit 187! Can't Detroit have anything?!?

I feel the same way about Another World and Guiding Light. I haven't watched them in years, but I wanted them to be there.

Hooray for the end of tax season!! And the Curve of Pursuit - I can't wait to see it! :)