Home Archives Profile Subscribe
Shouldn't It Rain Less in May?
Life is Just a Tree of Cherries

Birdsong of A View From Sierra County has a new venture, natural dyeing, she's named Nature's Cauldron. This intrigues me, I've always liked natural colors - undyed wool mostly but dyeing with organics is a nice alternate. (Possibly there are exceptions to the natural rule.)

My adorable brother calls me up Saturday to check to see if I was raptured (alas no) but also lets it slip that he'd gone to the Prosperous and Beautiful Sheep & Fiber Fest that day and had bought Nerissa (one of their kitties) a sheepskin rug but his own sister??

Nada. Nothing. Zip. Zilch. Darn. I've been collecting natural wool as souveniers from various places - I'm planning on making a Cowichan style sweater out of them eventually, or possibly a Lebowski style pattern.

Stefanie of So Many Books has a nifty link. The Guardian UK is (was?) asking for help building 24 hours of fictional time using lines from literature. Here's the link to the Literary Clock to date.

(entirely different literary clock link - picture used without permission so it's possible I'll have to remove it. But isn't that cool?). 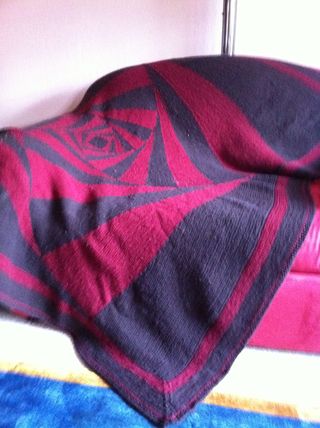 When the Boogyman goes to sleep at night, he checks his closet for Chuck Norris.

Chuck Norris doesn't read books, he stares them down until he gets the information he wants.

Guns sleep with a picture of Chuck Norris under their pillow.

Crop circles are Chuck Norris's way of saying to the aliens "Don't make me come up there".

Chuck Norris is what Willis was talkin' about.

The only thing fear has to fear is Chuck Norris.

Chuck Norris can roll a stone and make it gather moss.

Chuck Norris can stand at the bottom of a bottomless pit.

Chuck Norris made the forest petrified.

I may have spent all day last Monday knitting the final interminable rows of my Curve of Pursuit watching Walker, Texas Ranger.

Math trumped blocking but it came out pretty nicely. Oh phooey, that's a picture of the first felting go 'round. The wrinkles have been erased and it's felted to a more consistent blanket-like texture AND the washbasin in the garage is sparkly-clean, not that it helped, I had to toss it in the washing machine and dryer again.

Mom's project continues apace. One of the downsides of using a cross stitch pattern for a chart is that not only do you have to repeat every third row but it's not set up to knit easily. I've been wrapping the yarn a stitch or two in advance of a color change on some of the return rows - one advantage is that I'm going to felt the whole thing to make the book bag sturdier. Felting means that I can whack the occasional (see pic) loose end.

READING: Not so much. I've started and stopped a number of books (Here, There & Everywhere, Legacy of Ashes: The History of the CIA (which I hope and pray portrays them as such imcompetent evil buffoons because Tim Weiner as biased as the CIA says or the good stuff is redacted and protected by secrecy acts, because otherwise we are doomed).

I'm cheating on both of them with Juliet and despite the fact that it's a pretty sure thing that it's going to be a love story, (I'm psychic that way) I think Juliet is going to get read more or less in one sitting. Wow, it looks like it's going to be a movie. (No. Book trailer). Weirdly I don't have a copy of Romeo & Juliet in my bookshelves. iPhone to the rescue! Online text. I was looking for the forward but I'll pick up a copy somewhere today. 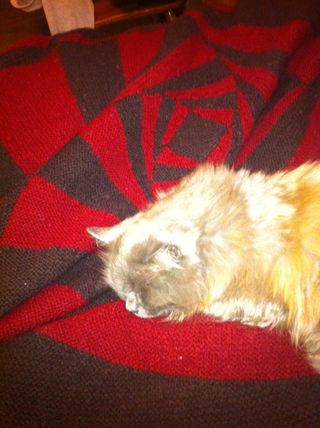 LatelyI have had this strange feeling that I'm not getting anything done.

Strange because normally, outside of work and its incessant deadlines, I rail against the mindset that one has to accomplish something every hour of one's day.

But there it is. My stash isn't discernibly diminishing (and considering that wool prices are about to rise and the economy continues to flounder, that may be a good thing).

My bookshelves are spilling over with books I haven't read yet.

Oh no. I just realized my entire problem with that is that I have no good excuse to buy anything new. Sheesh. I do not need/want anything new! Plenty on hand! I've beeen brainwashed by my culture.

Hez sez, "Shhhhh. You will fix me tuna, draining the tuna juice into a small glass bowl when I awaken. And be quiet about it."

I haven't been reading much, either, but the CIA book sounds intriguing. I am almost positive we are, in fact, doomed. I don't think shrinking the government is a good idea. Personal opinion.

How can you not have Romeo and Juliet on your shelves? That is just so wrong.

Hey, looks like you need to go out and buy more tuna! Will that help? ;)

Love the colors you chose for Curve of Pursuit! Hez does too apparently :) And nice that your brother called to check if you had been raptured but it would have been even nicer if he'd gotten you something at the festival!

Maths shmath - your blanket looks perfect to me and the colors, oh the colors!

Those brothers are so mean, aren't they?

And I think we need to start a new sub-culture - we got everything we need, we don't need to buy that - thank you very much!

Me likes the blankie!!!

I've been considering making a blanket/afghan one of these days, but I hadn't decided on a pattern yet. Hmmmm...

Thank you. I have now found the perfect Cowichan sweater!

Hez knows how to calm the beast in you! ;p

Love your Curves of Pursuit. It is gorgeous! Did you make it just for Hez?

Curve of Pursuit turned out beautifully. I really did think blocking could overcome anything though. Kiki sends me mental messages about tuna too.

We have been speaking much of Conspicuous Consumption and its evils at my house of late. Saturday is tuna day at our house, but if anyone makes a tuna sandwich, the juice MUST be drained into a glass bowl. All good Kitty Staff know this.

If the blanket doesn't give you a sense of accomplishment, I can't help you! :P

How is he still your adorable brother when he failed you like that?

We need Walker Texas Ranger to take on the CIA. Curve of Pursuit looks fab.

Don't worry he adjusted his math and now says its October 21 for the rapture. :-)

Your Curve of Pursuit is Beautiful! That is a very large accomplishment. I've not been doing a lot of knitting lately. No spark. Listened to a lot of books. I'm not a real reader,I can't do 2 things at once if one this is reading.
Hope you enjoy the up-coming Holiday Weekend.

My tween and her friend were amused by your Chuck Norris lines :) And I am vastly amused (in the good way) by your Curve of Pursuit - so lovely...

Thank you! Im proud of it - at least its an FO!
I found them vastly amusing myself. :)

No no no, felting trumps math AND blocking! Love the blanket - so cozy! The book bag will be great. I've never tried to knit a cross stitch pattern (and now I probably won't!). I know what you mean - I have wool, I have books, and I think all of us having wool and books are the secret real reason why the economy tanked :-)

Carrie- There are some hilarious Chuck Norris jokes online- I'll see if I can find them.

Love the blanket. So does Hez.

The blanket is perfect (and it would appear Hez agrees!). Can I vote for a Dude sweater? I actually am not too fond of the style but how can you not love the Dude and want to mimic him? Or maybe that's just me.

Wool prices are going up? Eek! Must stockpile!

Whatever it took to get that blanket done, it's beautiful! I hope Hez is willing to share it with you.

He got the cat a sheepskin rug? Lucky Nerissa! I'm sure that Hez will want one next.

I have times where I feel a bit meh. They usually pass which is why I started my little sock club. It is kind of fun to refocus on the stash. I haven't bought any new yarn for ages or fiction books since I joined the library.

Hey, how did I miss your blanket!?
It looks great, and I love Chuck Noris jokes. :o)