Shouldn't It Rain Less in May?

What I did on My Summer Vacation  few days off. 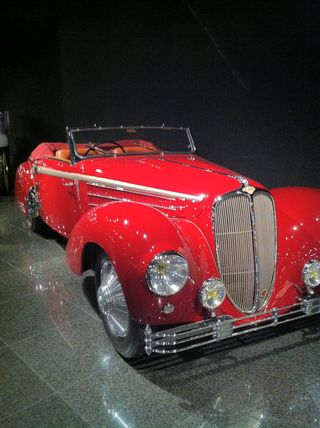 Maybe this would be better for cruising to the beach. 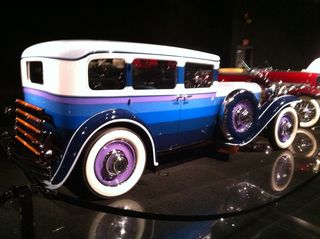 But then there are those days where you just want to make a statement.... ...or reward the labor of the four elephants it reputedly took to pull this out of the jungle: 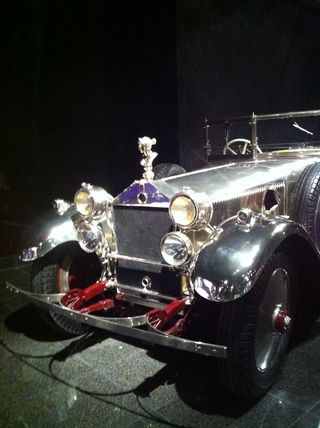 I can't decide. Check out The Blackhawk Automotive Museum for your favorite ride. 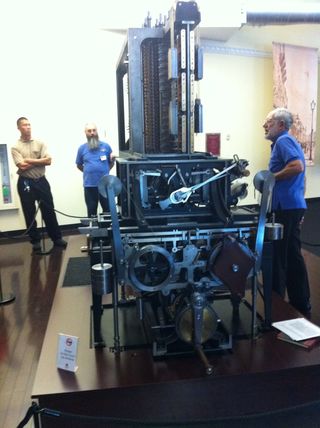 Other than that.......I did pretty much nothing. Baked a Lady Baltimore cake. Didn't even frost it. (Partially because I really made it for the batter and only baked it because......well, that was a lot of batter. As it turns out, it was quite tasty baked and didn't need frosting, particularly the peculiar cookbook suggestion).

Not watching NCIS or NCIS LA until I find out who dies and who's coming back next year. (Hint: Hetty had better be the latter and not the former). I wish they'd get off this stupid kick of cliffhangers. It's occasionally interesting but every freaking year and every freaking show? Especially in this era of axing by the numbers. Chicago Code and Detroit 187 both cancelled. Grr.

On the plus side, Law & Order Criminal Intent (WARNING: Talking websites, gah) and In Plain Sight are back. Yay! I feel slightly disloyal for admitting this, since L&O:CI exists only because Vincent D'Onofrio helmed it, but I liked Jeff Goldblum's detective the best of the three. 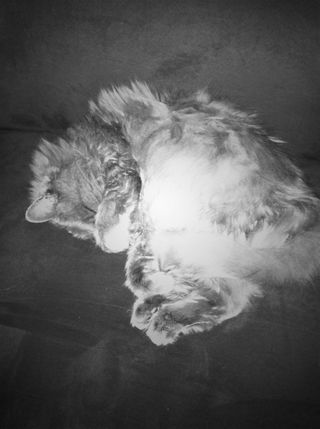 I'm guessing Ralph Macchio is getting voted out tonight on Dancing With the Stars. It has to be someone but I don't like the way the judges score him. Ralph is not that bad of a dancer. Hines is flatfooted occasionally.  Kirstie is really the worst dancer but even she has some fabulous moments. (Other times it looks like she's just doing whatever steps she can remember.) Their praise is over the top for the annointed few. Gush but geez.

I managed to finish my Curve of Pursuit yesterday. (Cascade 220, possibly a zillion skeins)........ It's off kilter because I absentmindedly short-rowed 3x randomly in one wedge (that I'm aware of) and it needs to be felted up a bit to make it blanketier and possibly blocked within an inch of its life to pull it into line. (Does math trump wet blocking? We'll see.) Maybe I should throw it in with my salmon colored jeans that I absolutely love but have absolutely nothing to wear with in the hopes that CoP felts and jeans over-dye. (I'm pretty sure those pants date from the 80's).

Math trumps nuthin in my world. Mostly. I have to say, I have problems emailing you when I respond. It kicks back.

My choice will be the red beauty at the top! such a stylish creation!

I hope your blocking will win over the math although I must admit, I doubt it can happen. Sorry.

We've had the most rain in May since we moved here, and it's not over yet!
I've watched NCIS, and am watching NCIS LA right now. :o)

The four elephants comment made me snort. Didn't know Jeff Goldblum is in a TV series 'cause you know me and television but he is enough to make me wish for cable or satellite service. Alas . . . ain't happening. Did I tell you I saw him in The Prisoner of 2nd Avenue on stage in London, last year? He was all kinds of awesome wrapped up in amazing with a cherry on top. Or something like that.

Obviously, I'm in one of those moods. It's the broccoli. Having to suddenly eat right. Ugh.

I can sympathize about the rain!

Is that Hez or a fluffy cushion?

It rained over the weekend and again last night. This was following a thunderstorm last week. I was stunned.

I tried felting a jacket for Bob and it ended up a jacket for me. Clearly not my forte. (No, not Celtic Icon.)

It's been raining buckets here too. Day after day.

I am so glad L&O:CI is back. Jeff G. took some getting used to, but in the end I have to say Vincent D'Onofrio and Kathryn Erbe are an excellent team. Other than that, this TV season has been pretty meh, except for maybe Burn Notice and the HBO.

Malcolm is lying here next to me. He insists I say hello to Hez. Well, if he were awake, I know he would.

Hooray for In Plain Sight! If only it weren't so late on a Sunday (or if only I had TiVO, right?). Can't wait to see who wins the math vs wet blocking competition (and/or the jeans vs blanket competition).

Sounds like a perfect little break. I've never heard of that cake, I'm going to ahve to google it. I liked Jeff Goldblum too.

I knew I liked you. Making a cake just for the batter sounds like something I would do!

You are talking about shows I don't watch, so while I could tell you names of people who do or don't die, I couldn't guarantee they would be people actually in the show...

And I am so. Done. With. Rain. At least until it's SUPPOSED to rain again.

Tired of the rain. Just heard a round of thunder here. I love antique cars, and I am guessing you would love the Harrah's museum in Reno. There are nice displays to complement the cars with artifacts and clothing from their eras. I am amazed by Curve of Pursuit; not sure I would have the patience for that!

Why must characters be killed off? I love MI-5 but hate it as well because they always kill off people. Nobody is safe anymore!

Curve of Pursuit is done!!! Pictures please once you beat it into submission.

Oh me oh my, you're talking FELTING? And OVERDYEING? You're speaking my langauge! If the jeans don't dye (and they still fit you) I'll dye them for you! Glad you got out into the world and saw that it was still there!

Im enthralled by the blue/purple striped...is that a Packard?
Hez is hiding from the rain?
(((hugs)))

Nice rides! I think the red one will be the best choice for cruising. Definitely eye catching! Will you post photos of your version of curve of pursuit when you have it all blocked? I'd like to see :)

I'm missing Dancing....this year, we don't have cable so limited channels here. I agree about the anointed few, that's always the case on there it seems, still a great show. I'd pick that first car if I were you. Hez could ride on the passenger side, with fur blowing in the wind!!!

Yeah for finishing CoP! I liked Chicago Code. Did you see the adds for the "MASH meets China Beach meets Gray's"?

I can't wait to see your Curve of Pursuit! I love picking out second cars -- I'd like an MG B and a Karmann Ghia, please.

Carrie- Back up the truck.. you weren't going to bake the cake? Just eat the batter?

Do I have that right?

Cake batter. What is so special about this cake batter? What am I missing by not baking cakes and licking the spoon?

What?! I missed a cliffhanger--or two? Oh sigh. I need to do some computer TV very soon!

It's definitely not raining any less here.

I'd definitely go for that gorgeous scarlet roadster.

Can't wait to see photos of your Curve of Pursuit!
Your photos of the auto museum are awesome! Who knew that there were cars out there that looked like that. What one misses by living in Alaska.

I call Shotgun! In any of the cars.

I think any of those cars would make quite a statement. Chicago Code too? Why do they even bother to develop these shows? I think wet blocking can overcome just about anything.

Send your rain here! We haven't had any for ages!