Life is Just a Tree of Cherries

If only I was participating in Project Spectrum. 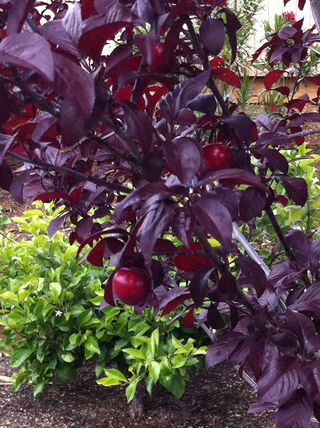 Our fruitless cherry tree! may not be named correctly. Kind of like Hezekiah being a girl.

Too bad I don't like cherries. At all. Probably stemming from a sickly childhood. Who thought putting cherry flavoring in medicine made it better tasting? It just ruined cherries proper.

We had quail visiting us too. They used to wander our street all the time but as the houses have been built in the hills, they came by less and less. Do quail lay eggs and then leave? Hopefully not. Hopefully she was just resting and Daddy Quail was merely being a lookout because the blue jays live in the oleanders she was resting under. I went out and advised them it would be injudicious but they ignored me. Birdbrains.

Poor Hez went to the vet on Thursday and currently hates me. It looked like her left front paw "thumb" had the claw growing into it - luckily not quite and she did need her annual shots but....she remains unconvinced it was for her own good. The vet tried amusing her with laser chase but she just stared back implacably. Like this. 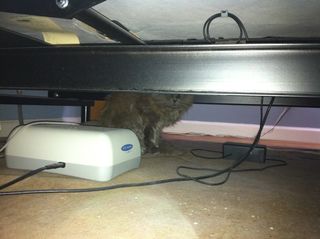 Oh, how can you NOT like cherries? The ones on your tree look delicious.
Cats seem to be less forgiving about Vet visits.

Oh I'm jealous! I love cherries, they are my absolute favorite fruit.

Poor Hez, well if it makes her feel any better, tell her my mom's cat today went and got shaved. Oh the indecency of it.

Poor Hez. Watch out... you she may get her revenge tonight while you sleep.

Maybe they use those awful flavors to deter kids from sneaking into the medicine box and drinking some when they are completely healthy?
Nah,,, I know your theory is the correct one but most kids love those disgusting flavors, seriously.

Poor Hez. Is she very vocal in her loath of Vets? our Saki let you know right away what he thinks about the whole trip!

Poor Hez. Chaos & May are as unconvinced as you.

Poor Hez. Hope she has forgiven you now.

I love cherries - am addicted!

Can you take back that defective tree? Clearly, it's broken or something.

Any trip to the vet that does not draw blood from a human is a win. Trust me.

Feel free to send your cherries to me - I love them, cough syrup notwithstanding.

Mmm. I love cherries. If I had time off I would find your house and steal them. :D

Awww. Poor Hez. :D We're having to deliver anti-worm meds to ours. We get the worst dirty looks. Heavy catnip doses help to dull the memories.

Poor Hez. Frances hates the car and the vet with the fiery power of 1000 suns, and sulks for the rest of the day afterwards.

After what she's been through, I can't really blame her. The sad yowling in the carrier on the way is awful.

That's a beautiful cherry tree. Do you know what kind it is?

Poor Hez. Not a happy camper, that one!

I recognize that look from Hez.

Poor Hez. Nothing like a trip to the vet to ruin a good nap.

Send the cherries to me. I LOVE them. Sympathy to Hez. I keep telling my cat that nobody likes to be felt up by the doctor, but she doesn't believe me.

Poor Hez. I expect she's gotten over it by now...I'm a fan of cherries about once a year. We got sick on cherries as kids - a neighbor had a tree and my pal and I went to "help" pick. OMG...that's a not-fun sick.
Usually my 1ce a year involves a thin sliver of cherry pie at the holidays.
Done and done.
(((hugs)))

It is funny how much something like that can affect your tastes as an adult. I recently discovered that very tiny fresh lima beans, just picked and cooked greek style are edible.

I've only had cherries two or three times in my life. They just don't taste good without buckets of sugar, if you ask me. I was unimpressed.

Your vet tried to entertain Hez? Cool! Even if it didn't work . . .

My children feel the same way about grape flavoring thanks to Children's Dimetapp. When I was growing up the people across the street had a cherry tree and I would sit in it and eat cherries until I was sick. I still have trouble facing them.

I ADORE the picture of Hez. Been there!

I'm gonna say nothing about not liking cherries. I've been told a thousand times that I'm a mutant because I don't like avocado. Ick. Or mangoes. Ick.

Your cherry tree is gorgeous. Are the leaves already a deep red like that? Poor Hez. I hope she has forgiven you by now. My boys will have to go to the vet soon and I expect they will give me the cold shoulder for awhile afterwards too.

I can't take cherry flavored medication. Its horrible! I refuse to buy that flavor for my kids too. Instead I buy grape and bubble gum or orange flavor probably running those flavors for their whole adulthood! Poor Hez, do hope she's forgiven you by now. My cats usually hid on my for days after a vet trip.

And I don't know why everything is an exclamation right now. Maybe 'cuz I'm tired.

I like cherries, but I can't seem to get to mine before the robins goggle them up! Luckily, they are in plentiful supply at the supermarket currently.

Poor Hez. My own puppy has a history of biting the vet so he gets a little muzzle put on him every time. He's still not convinced the visit does him any good, either!

You don't like cherries? Aww, how sadly ironic, really, that your tree has started fruiting with fruit that looks delcious.

Just curious, do grapes also remind you of medicine? I always feel that grape is the "other" medicine flavor but that it doesn't actually capture the flavor of grapes very well at all...

My poor cat has to be gassed just to get flea medicine! He's so uncooperative.

I hate that medicine ruined cherries for you. Bad Tylenol! :o(

The cherries look fantastic, I could eat them by the bucket!!!

Oh poor Hez, big hug to you and a headbonk from the Ched! Tell Hez that Ched is blogging quite a bit these days and getting quite snooty in the process LOL