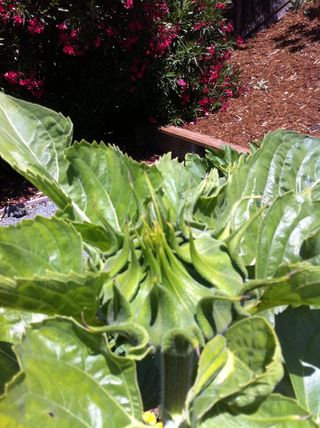 Someday when that 'grows up' (it's already taller than the zucchini plant), it's going to be a sunflower.

There are teeny tiny little birds ripping out holes in the leaves to feast on - which, bad for the sunflower, good for the pepper plants, because they're leaving them alone this year.

I'd have some cute pictures of the leaf thieves -  and the four adult quail and their baby that wander through the backyard - but it turns out birds are annoyingly camera shy and the iPhone camera sucks for "quick" and "furtrive".

The garden is all greens and yellows now. The splash of red from the tomatos and peppers probably won't happen until August.

Any bets on whether I'll have any FO's by then or more projects cast on? I do get to spend the day at the hospital with my Mom on Tuesday (just invasive tests that I plan on never needing to take but I'm game to go with.)

In the reading arena,  recently caught my eye. David Hockney's thesis in his Secret Knowledge: Rediscovering the Lost Techniques of the Old Masters argues that camera obscura was used much earlier than previously thought. (Don't ask me, my take on art tends to be "ooh, pretty!" and "what the -? What's that supposed to be?" The more it looks like a photograph, the more impressive I find it. Hate Monet. Although his work looks like a photograph too, if I take off my glasses.)

Can you name the paintings in this video? Recognize any?

Well. That was a Week That Was and Doesn't Have to Again. 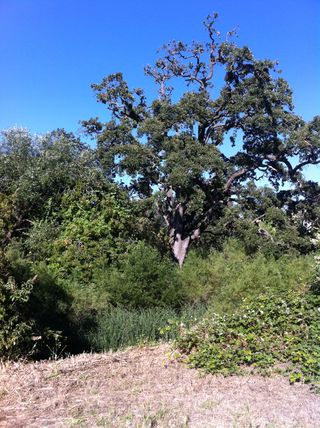 Now THIS is a tree.

I'm bummed at mortality. Two good men are gone from the earth this last week and it's just so wrong.

C-Span is airing their Library of Congress special tonight at 8pm.

Elizabeth I is done to the neck shaping thanks to nine hours of continuing ed last week.

(That's a Ravelry link to the main pattern and not mine, as mine isn't even using the same yarn. You'll be shocked to learn I'd changed my mind, frogged her and started over). (The Ravelry link is to a Slate article about Ravelry. Rav rulz)

I finally slogged through Aldous Huxley's pretentious drug trip tome, The Doors of Perception. Other than inspiring a great band name, what a snooze. I suppose it was more exciting in 1956 but he's prattling on about vision quests and psychological breakthroughs and I'm picturing meth kids. 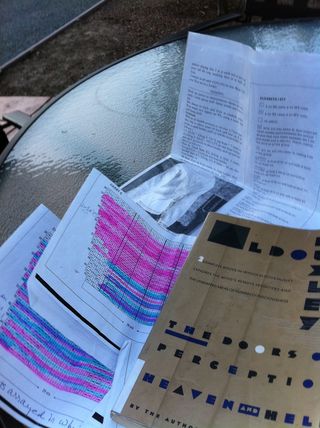 In the spirit of WIP Wednesday, and, to a lesser extent, rummaging for something I felt like knitting, I took a fearless and searching inventory of my WIPs.

Ahem. I started to.

< - - - See that? There are at least three charts with highlights.

I do not want to "read" my knitting. I want to knit.

Maybe I should mark where I've STOPPED rather than where I STARTED.

Has anyone read any Alain De Botton? (Have I asked that already? He's my new litcrush). I'm rapidly aquiring all his books, the latest, How Proust Can Change Your Life. (That's a New York Times review that won't pop up in a link but can be Googled).   By george, I think Proust might. If, mind you, I actually read Proust.

(My other litcrush, Simon Von Booy has a new book out this week, Everything Beautiful Began After. He is the most lyrical writer.) 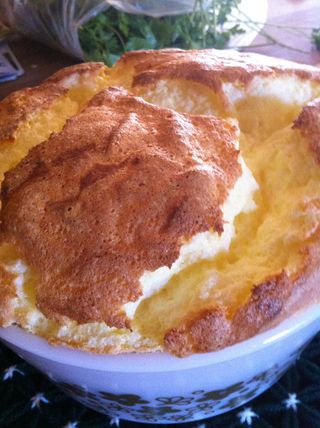 The child that they raised IS their child. Just one that they, horrifyingly, somehow have to share, and the have just met their own child on the verge of adulthood. Just thinking about it makes me slighly teary.

It has the obligatory opposites, wrong side/right side of the tracks, married vs single, recovering alcoholic vs socialite, deaf vs hearing but it's all so seamlessly woven. Lea Thompson and Constance Marie play the mothers.