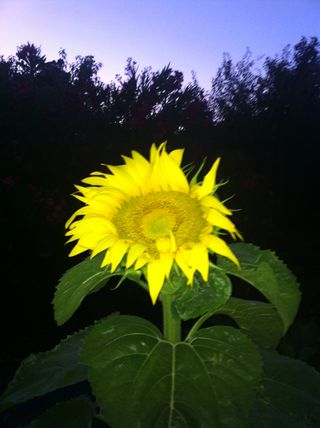 Last night, my darling loving cat, for no apparent reason, other than I opened the front door and asked if she wanted any tuna, raced across the street (which she is NOT allowed to do), hid first in Linda's rose bushes, fled next to Paula's hedge, (they block her front facing windows, thankfully she wasn't home while I was thrashing around trying to catch Hez) was pursued back across the street where she took refuge under a blue Ford truck in the Jimenez's old house (huh, I have no idea who lives there now), scrambled over the next few yards and finally eluded pursuit by escaping to the safety of the vegetable beds in her own back yard.

She spent the rest of the evening in high dudgeon, giving me speaking glances.

This morning all was forgiven, until I cut out the burr in her tail. O.M.G.

So, 'hullo!' says I, Evil Incarnate. Read anything good lately? Knit much?

I picked up A Heritage and Its History (1959) by Ivy Compton-Burnett that took a bit to get into - every one speaks in these mannered pronouncements and are practically indistinguishable in tone but the characters (all family members and a lone manservant) are well drawn.

It's one of those books that seems too clever by half but suddenly sucks you in. Let's just say that Walter's statement to and about his brother as "the hero of a tragedy. It is a pity you are the villain as well." is correct. He's also a bit of an ass, brings his trouble on himself and takes it out on those around him, all with the most impeccable of manners, of course. It's clearly a time and place long gone (at least to this California native) but in the end, it's all so plausibly familial.

Plus half her titles are alliterative or rhyme. Pastors and Mastors. A House and its Head. Darkness and Day. Manservant and Maidservant. That amuses me. 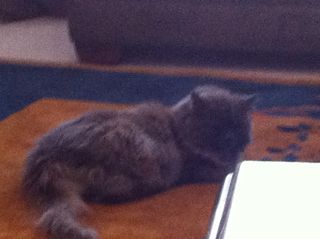 Princess of Cleves (1671) by Madame de Lafayette (translated by Nancy Mitford) is exactly the opposite. There's barely any dialogue at all. It's familial only that it takes place in the incestuous atmosphere of Henry II's court in France in the late 1550's (during the time of Elizabeth I of England's reign. Actually, until the Romantic Interest (the Duc de Nemours) was held up as a possible suitor for Elizabeth I, it could have taken place during Charlemagne's reign, for all I know about the history of France.  Other than he was married to Catherine de Medici and I've been reading up on her.) (Henry II. Not Charlemagne.)

Mary Stuart is the heroine's confidante and it's oddly fun but unnervingly different to see her as a young widowed queen in a lively court.  Mme de Cleves is the heroine of the story, the cliched beautiful girl who marries to please her mother and her new husband but has an untouched heart. Her story isn't about a love affair but her struggle with her conscience. Supposedly the book marks the beginning of the notion of romantic married love, the idea of wedded bliss being odd for a time of arranged marriages but it's gossipy fun.

All my knitting hates me like the cat. I'm knitting a Super Secret project that I probably won't finish in time but isn't the right season anyway and a linen bread basket liner because I can.

Wow, Hez is just cutting you with that look!

Bad Hez! Bad! Bad!
Just try living on the streets and see how much you like it.

I never managed to get through anything by Compton-Burnett-- as you say, too mannered.

Still wanting to be Hez.

I'm calling the authorities on you, you cat abuser ...

Uh-oh Hez, you shouldn'tc ross the street without a human.

My friends had this wonderful German Shepherd Mocha (their last name is Coffee) and Mocha knew she wasn't allowed to cross the streets. Well one day she couldn't resist chasing a rabbit. Her people searched and searched for her and finally found her, on the block where she gave off the chase, waiting at the corner for a human to help her cross the street.

I love your description of books that, against your own will, pull you in. Dastardly of them!

Oh Hez... I've heard good things about Ivy Compton-Burnett (esp. "All Passion Spent") but haven't read any of her books yet! Thanks for the reminder.

She's telling you to either visit the gym or introduce yourself to the people in the Jimenez's old house.

Seriously, how do you not know about those people considering what your neighborhood is like?

Oh, Hez. Maybe she was looking for Tony. Clearly you have not been living up to your training as staff. (you do and do and do for them, and THIS is the thanks you get!)

Hez is definitely TICKED. Poor thing, you "mistreat" her so...
*wink*

I was just thinking of trying Ivy Compton Burnett, after seeing this quote from John Waters re. IC_B who wrote "twenty dark, hilarious, evil little novels between the years 1911 and 1969."

A Burr!? She wanted that there, I'm sure. Mondays!

You find some pretty cool books.

The basket liner looks very classy. You should, since you can. :D

Naughty Hez! Guess she won't be offered any tuna again for quite some time.

It seems to be a good time for cats to act up. Geez.

Wow that is one cross kitty!

Oh, that crazy Hez. You probably would really, really like to trade kitties with me. Mine follow me everywhere. Puppy cats, both of them. It is a wee bit annoying when Isabel gets so insistent about trying to eat the human food that she sits on her hind legs, front paws on whatever bowl or plate I'm trying to keep away from her (when, as is fitting for a princess like myself, husband brings food to me in the bedroom).

Both cats run from the guys. I think poor Kiddo is just too big, noisy and scary. He wants me to find a third kitty -- one that will follow *him* around with blind devotion and sleep on his feet.