There's a New Kit In Town 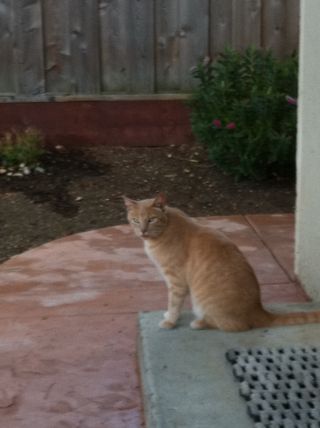 Hez has a boyfriend.(Tony. He lives next door.)

Sometimes he's at the Malley's.

(His other next door neighbor.)

But he's practically a part of the family.

Except that he'll still eat whatever I serve.

And he talks to me.

I've really, really missed being chatted up/yelled at/bossed around by a cat. (Verbally, lest you think Hez has abandoned her genetic heritage.)

Gah. The landscapers need to get out here and put that promised tile on the back step. It looks awful.

The tomatos are getting ripe though! 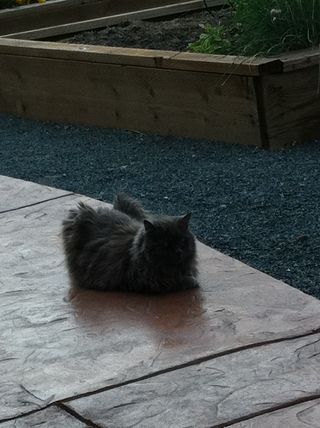 Poor Hez. That usurper must go!

We're about to have a not-so-happy camper of our own. We're adopting an outside cat. Tikka's already in a mood about it.

I don't know where my mind was for a moment... when I saw the title of your blog post, I thought you were talking about a new Knitting Kit. Never did I think that Hez would let someone step in on her turf!

Our back yard has recently become a gathering place for the neighborhood kitties, including the pack of feral kittens from across the street. Princess is very displeased.

Uhoh. Frances gets royally pissed off by any other cats entering her turf. She will yowl, growl, and scream at them right through the screen door if she sees one. Not pretty.

I have a soft spot for orange toms. Chatty cats are nice sometimes, but sometimes I wish mine would find something else to do! I didn't know Hez wasn't a talker.

I'm not going to admit the number of times I scrolled back and forth between the cat photos. Laughed every time, though.

Hez- you've been putting it about, you little minx.

I suspect she is glaring at That Man from a safe distance. My son's cat is a talker. She is the only kitty who is both indoors and out and when she comes in, she has a lot to say. I think she's trying to tell him a bout her adventures.

Being talked to is highly overrated, ya know.

Tony seems like a nice visitor, chatty and uncomplaining. I'm sure Hez knows he will never take her place but she is still required to pout over it :)

Awww Tony is cute! I do miss my ginger kitties!

She does look rather cranky - I'm impressed she hasn't chased off her beau!

I like visiting kitties, if Mack likes them. Unfortunately, he hasn't met one that he likes yet!

Hai, Tony! Hez must find something appealing about him. Yay for ripening tomatoes! Do you have the bacon and lettuce ready? :D

Poor Hez, indeed! Tony's a looker, though, and I love chatty kitties when they have good voices.

Awwww... Hez! You can come here and visit.

He is a very fine looking man-cat.

My guys are weird. Except for Guido, they really haven't figured out the whole "my turf/your turf" thing with other cats.