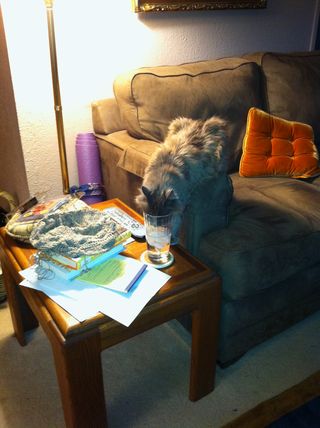 Isn't every day DEAR? It is in my world, unless it's DEAK, which, admittedly, doesn't have the same impact.  In the spirit of DEAR, (which I accidentally stumbled across this morning in search of a cardigan with a ruffled buttonband I saw on Knitting Daily), my latest reads.

September 6, Drop Everything And Read day. (Which we're just going to continue for a few days because......well, because.)

I finally finished The Mind's Eye by Oliver Sacks. The book both horrified and fascinated me - born with a cataract and surgery for it at the age of seven, my left eye remains functionally blind.  My depth perception is learned, I don't actually have any - you need both eyes.

It never dawned on me I could one day wake up and not be able to read - not because I was blind, mind you, but due to some weakness in the arterial system or a tumor. Or not recognise faces. (Granted, I found that less horrifying than not being able to read.)

When Dr Sacks lost the use of an eye and slowly lost his super-stereoscopic vision, I was meanly somewhat delighted. Ha. Welcome to MY world. It really isn't that bad, is it? I can only imagine depth.

Wow, this computer is horrible. It's so slow, I can practically see each letter appearing after I've typed the sentence. (Hence the several days later posting.....) 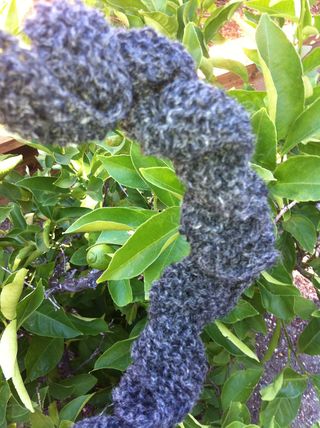 SPOILERS! SPOILERS! Just to warn you. Although I won't always.  Next up was the first in a time traveling YA trilogy by Kerstin Gier. It starts out with Ruby Red, the twelfth in the line of genetically chosen time travelers. Gah.I have to double check her name, it's written first person and the one I remember is her cousin, Charlotte, thought to be the time traveler of her generation, known to the family by her birthdate. Gwyneth was born a day later. Was Isaac Newton's calculations wrong? (Funny how I remembered her name finally. Gideon, the dreamy older cousin that she travels with, calls her Winnie). There's cryptic conspiracy theory poetry at the beginning of the chapters, Count Saint-Germain figures prominently, along with her best friend Lesley, that I'm waiting to reveal a few secrets of her own.

Sadly that's Book One and while Book Two (Sapphire Blue) is out, it hasn't been translated from German yet. I wonder if my grade school German would get me through it. Maybe with Google Translate? Doubtful.

It's a bit of a romance (in fact, one review stated something along the lines of it being an awful long prelude to a kiss, but even I, romance phobe that I am, enjoyed it. It's not Great Literature but who cares? 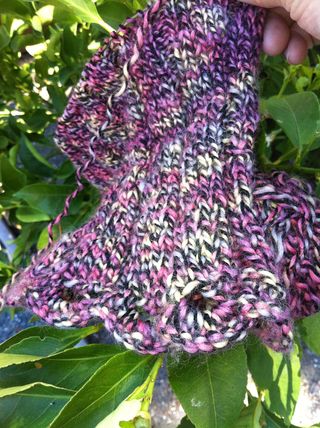 Finally I read The Weird Sisters. I'd heard that they communicated in Shakespearean quotes but that's not the case. Just apt quotes and not nearly as frequently as you'd expect from the family of a professor that made his life work a study of Shakespeare.

I liked the conceit of the novel being told from the point of view as the collective sisters - that way the third person could always be employed but there was first person knowledge sharing details. Rosalind, known as Rose, first born with all the attendant qualities of a first born (conscientious, responsible, brave, fearless, honorable, good looking...what? I would know. I'm a first born). Bianca, known as Bean, named after the younger sister in Taming of the Shrew, wild to get shut of their small college town for NYC, and finally Cordelia, Cordy, after King Lear's youngest daughter. Not much to live up to, eh? No wonder she's a drifter. They're all under the ancestral roof, ostensibly to help their mother through her cancer treatments but naturally they have their own reasons and secrets. I really enjoyed this book.

Currently I'm reading The Black Prism and debating if there are any characters at all in the book that I like. Mind you, I'm over 420 pages in so they must have some appeal, but none of them qualify as the least heroic. Possibly General Danavers, but we'll see.

In knitting news - still trying to get Secret Prototype to work out. Crocheted the bottom but can't get the knit body to pick up nicely. On the eleventh billionty version of the Sugar Scalloped Sweater. Cross your fingers, it's been a WIP since 2000.

I'm for DEAK myself. I should pick up some of your recommended reading.

Fingers are crossed for you. I need to drag out some hoary old WIPs myself.

Heh, yesterday was a DEAR day for me and I didn't even know it. The picture of Hez made me smile; is she often a water glass drinker?

The more DEAR the better, I say.

As one eldest to another, I think your assessment is spot on! Love your cat, for some reason Mack prefers my water glass to his also.

Hez, you are too funny.

Even with the use of both eyes, my depth perception is pitiful. I suspect it may have something to do with my extreme myopia and astigmatism.

What does she do when she gets her head stuck in the glass?

What? Oh, I love the vampire books based on him.

D'oh! I missed Drop Everything and Read Day. I had to work, anyway...

DEAR -- brings back memories of teaching. Nowadays, I like DEAK better. :)

Keep on with the Sugar Sweater. It will get done!

I've been wanting to read Weird Sisters. Thanks for clarifying the quotes.

Oh wouldn't not being able to read be awful? My father lost most of his vision to macular degeneration, and 'read' books on tape. He would have loved digital. Weird Sisters goes on the list. I just read Ivan Doig the Whistling Season and loved it.

Sacks's book freaked me out and made me love him even more. To be that dispassionate talking about his own eye? GOD.

Hez better be careful or her head is going to get stuck! Good luck on the scalloped sweater!

Oh phew! Someone has a WIP older than mine!

I did not know that about your eye.

Did I miss your review of "Obituaries"?

Just about everyday is DEAR day for me, too. Sadly, I didn't find out about it until later (say, five minutes ago).

Hopefully Hez doesn't do what a cat of mine used to do: have her drink, and then knock the glass over. Onto whatever papers or books were most handy to absorb the water.

Hez! :D Just making sure there are no assassins near her dear momma, I'm sure.

I'm still contemplating the K but it may happen here soon.

I was going to ask what the pretty blue flower is but I figured out it is beauty of the k-kind.

Have you read Fixing My Gaze? I have it but haven't opened it yet.

DEAR!!! That's what I've been doing! As far as DEAK, I tried, but I forgot I put the project on other needles so I could start something new and now I can't find the new thing.

So, serious philosophical question now. Would you rather have known what you don't have, or never have known it? I often have this debate with myself. Would I rather lose my eyesight completely or take a spinal cord hit?

I'm glad to read your review of The Weird Sisters - it's been on my list. (Of course, I'm now caught up in a forensic anth series, so who knows when I'll break out of that one...)

Ooooh, time travel!!! Cat with face in cup!!! Your posts are always such fun. Miss Isabel just reminded me that chocolate-covered cranberries ROLL. They are therefore toys and if you leave one on the table or drop one onto the floor when an Izzy is near, you can kiss it goodbye, forever.

I was laughing so hard at the photo of Hez with her head in your water. It is like being at my house!!!