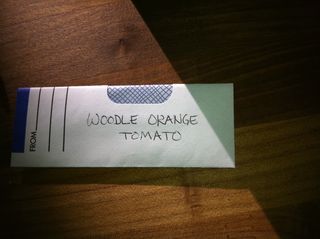 Woodle Orange Tomato seeds from Cabled Sheep, that is! I can't wait for the next tomato season to check them out. Woot!! Thanks, Cheryl!

I've got oodles of candy left over too, (UPDATE: today, 11/8/11, there is still candy!! It's a Halloween miracle!)  but we did have a pretty good turnout this year. Well, compared to last years count of NONE. Maybe 30 to 50 kids? They started a bit after 6pm and the last one came to the door at 7:30. I didn't even shut the light out until 8:30, just in case. (At 8:30, DWTS started and All Outside Distractions Cease.) Lots of little ones in cute costumes. I had maybe four that were middle school age, I think.

I'd show you knitting but basically still the same. Not that I haven't been knitting, but I've been knitting, tinking and frogging at about the same rate. So far, not casting on. But it's cold. And I'm tempted.

Is anyone watching Terra Nova? I managed to watch the second episode first so I was unclear on why Jason O'Mara's character had been in prison and how he got to Terra Nova, much less the rest of the relationships but I was distracted by the complete incompetence of the camp's population. They're attacked in the public plaza by prehistoric birds and they scatter like....birdseed? Did no one drill them? You'd think that it might have occurred to say......EVERYONE that things could go horribly wrong. Other than his abs, it hasn't gotten much better. He raced through a line of people, and guards, wearing a backpack and no one manage to stop him? I wanted to trip him just because he was taking cuts.

Watch Dancing With The Stars instead. And vote for J.R. Or Ricky, since I drew her in the pool. I like her, I even like Derek again, but JR is amazing.

Grimm wasn't all that impressive either. Maybe it was the Jagermeister Bears. Once Upon A Time started out a bit silly (and probably still is) but I like it. I won't tell you how long it took me to figure out where I knew Emma from.

Wait, there were no trick or treaters last year, and this year you had 30 to 50?!

That is the most awesome-est video EVAH! Can I get a link to send to my accountant friends w/o a Thomson reuters account?

Never mind, I found it.

Wow - big jump in the kiddies! Perhaps because it was on Sunday last year? We went from zero to 2.

Carrie- We didn't get as many trick or treaters this year- don't kids know that free candy is the best ever?

The only "Terra Nova" I've seen is what might still be on when I tune in for "House."

Heheheheeee I love your future competitors!

Did you have some population shift in your neighborhood or something? or did someone advertised the quality of your candy offerings? :)

I have never successfully gardened -- lately even houseplants are dropping like flies; but I have always liked the idea of heirloom varieties and not letting them disappear from this earth. You rock!

Terra Nova is still on?!

I turn out my light like a good Grinch...

Oh that is funny. Sending to some friends...about ten minutes of Grimm was plenty for me. Even with horses. I love heirloom tomatoes. I hate growing them from seed, though.

Hehe love the video!! Im looking forward to seeing your tomatoes next year :-)

Oh my gosh! HA! I would love to see an examiner video. Or not, it could just the thing to send me over. *JK*

I love heirloom 'maters. I used to have time to start them from seed. ;D

teevee? I saw the commercials for the scifi like ones but never found them during the week. Maybe I'll catch them on Netflix. Or not. :D

I've not seen those orange tomatoes before and we like the heirlooms at my house. Will have to investigate further!

Interesting ideas on all those new series -- I'm watching, too -- I wish the execution was a bit better. Still watching, though.

I will be sending the video to my son, who is studying to be an accountant, even though he really loves words. Silly, boy!

I do understand the knitting/frogging thing, oh too well! As for TV, I have been watching very little, but I didn't end up going for Terra Nova - sounds like I should be grateful...

Pretty funny video. Maybe I should make one for research biologists? ;)

Never even heard of those shows...not much TV lately except for watching more MI-5. We are up to season 8.

Either I laughed till I cried of I'm leaking tears because I've got a migraine. I'm really not sure. ;)

I can't see Terra Nova, but I had wishes. Were they the kind best off unfulfilled?

Carrie, dear, have you got a copy of Michael Buble's new Christmas CD?

You still have candy left? Sweet honey nougat, why haven't you sent it to me??