*My Kingdom Has Been Returned to Me!

AT LONG LAST! an FO! 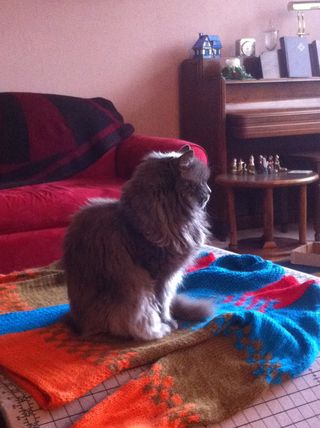 Finished kniting the garter stitch collar last Friday night and tried it on - it fits! Modeling it (proudly) for my mother, who gasped "That's amazing!"

Er....wha'? Was it because I actually finished something?

It's because she's been watching me knit that combination of colors in sort of a fascinated horror for the last couple of years and seemed shocked that she liked it.

Let's see if she tries to borrow it. 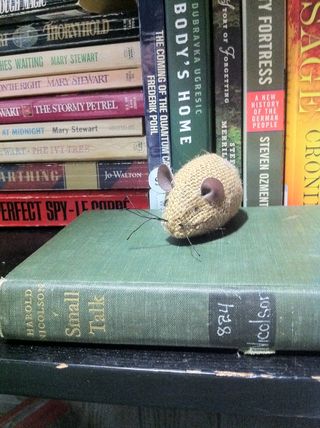 Perusing the shelves at the library, as is my wont, a hardback caught my eye. Small, somewhat inconspicuous, it was noticeably different in that the library call number and author's las name was written (not typed) on the spine. Too cool.

It was written in 1937 (the year my parents were born) and is a series of essays that the author's note advised has been published previously in Good Housekeeping, Nash's Magazine, Vanity Fair, Harper's Magazine, The Listener, Oxford, Britannia & Eve, The Queen, The Graphic and The Radio Times. Some of those periodicals are around, some are long gone and some I've never heard of, presumably because a) I'm not that old or b) they were published in England.

It's vastly amusing to see how different and how similar the world is now. He grew up at the tag end of the Edwardian age and is being schooled by his children - a product of the Great Wars.

Checking some reference, I discovered in Wikipedia that Harold Nicolson was the husband of Vita Sackville-West, who was also the lover of Virginia Woolf.

*"My Kingdom has been returned to me! I have long prayed for this day to come." 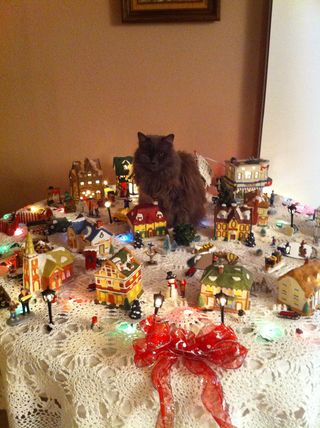 "And now I want to know - who got rid of the fluffy pillow fake snow and replaced it with this overgrown doily? And WTH is with the pointy picket fence?  It's not like it's real snow.

Also, there is too much stuff. I can lie down, in fact, I must, but I'm telling you. I am NOT comfortable. Harumph."

Please. Wear Sunglasses. For Your Own Safety 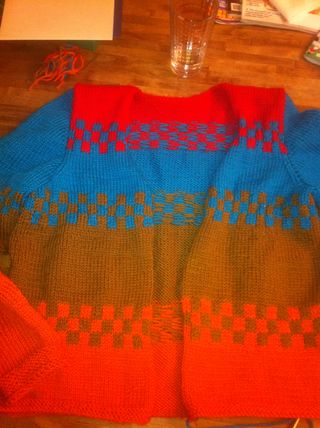 Wow. The red and orange are slightly less bright than that.

My mother seems to find me oddly unhelpful today.

I've been frogging too: (picture)

My eyes! My eyes! Still no. (picture. One of these days I'll figure out placement.) 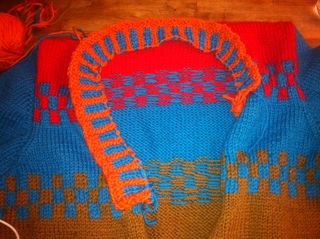 (Wow. I can hunt with Angie and I don't even need to buy a hunting jacket!)

But the checkered collar isn't that bad (well, it isn't that bad if you're not looking at it with a camera flash, pinky swear).( I think.) Still. Probably a garter stitch shawl collar.

READING: I have no books checked out from the library or on hold. For the first time in ages.

I took back two books unread and The Fairy Godmother by Mercedes Lackey with the last fifty pages to go. It was a cute book, an interesting enough twist on both the Fairy Godmother and Cinderella stories but it would. just. not. end. Still, it's a fun read so I'm recommending it. It's me. It took me forever to read Kurt Vonnegut's Bluebeard (my first Vonnegut!) Interesting that some found it a feminist book but I suppose. I liked the conceit that it was an autobiography of an abstract artist - I tend to agree with his mentor - the closer it looks to a photograph, the more impressive I find it. It was slightly unnerving to agree with him about the younger generation.

Now I'm reading the substantive changes and additions of 1120's and The Art of Subtext: Beyond Plot. 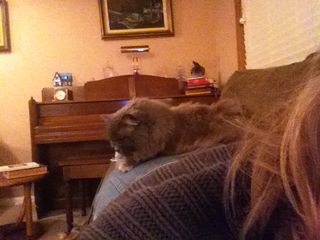 Does this make my butt look big?