Where I Spend Three Days Knitting and Reading And Finishing Nothing 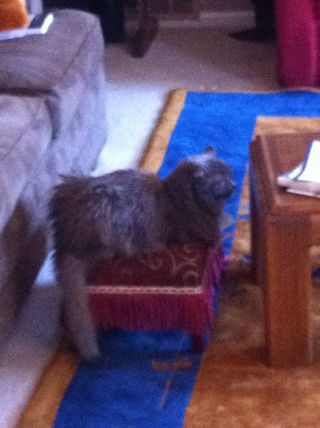 ....typically. I did pick up approximately 810 stitches, knit 27 rows and frog about four times, if anyone else is counting. And I finally got the letters I'm going to use in Mom's vest on Exel and charted. More or less charted. I may change a few things there as well.

Finished reading In The Shadow of the Throne: The Lady Arbella Stuart by Ruth Norrington and meant to read Jack Higgins new thriller but.....Bess of Hardwick: Empire Builder by Mary S Lovell insisted I hear her side first. Bess really did have an interesting life but her 4th and final husband sounds like he had his hands full with Bess, Queen Elizabeth and Mary, Queen of Scots. Wife, queen, prisoner. Prisoner who might be the next queen if the current one didn't make it. That sounds like a thrilling tightrope to walk.

Someone thinks she should be an outdoor cat again. Someone who rolled around in the dirt.

She was not amused. 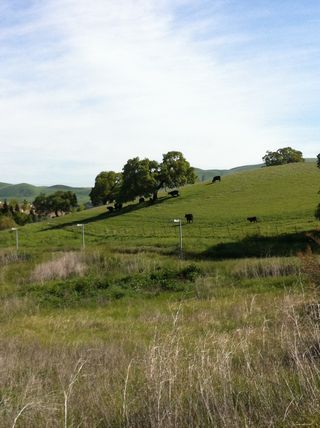 and it's spring! The hills are green, the cows look happy (although there was one young heifer that kept a wary eye on me and kept gamboling back to Mama). Too cute.

Somehow I managed to both gain weight and lower my cholesterol during tax season -  no mean feat.

Now I have to reaquaint myself with this thing called standing? walking? so very complicated....

and knitting and reading! A whole book! More than one! And don't have exciting stuff like AMT in them.

Birthright: The Story that Inspired Kidnapped by Roger Ekrich was pretty fascinating. Another example of family dynamics and entailed estates. Jemmy, the heir presumptive, is only in line for the five titles in England and Ireland because the oldest son line died out after three generations. (Well, he had a girl, but pfft. Don't start me.) His father is actually the heir presumptive but the current heir is a bit horrified - and who can blame him? Arthur Annesley is a ramshackle mess.

Kidnapped was equally rollicking but Robert Louis Stevenson's Jemmy, David Balfour, is a bit older, a clearer lineage and never gets far from Scotland. He's also a bit of a drama queen - at one point he's stranded on an island - within sight of a village - sore afraid and his clothing in tatters (okay, he was swept to the island when the ship sank, lucky to be alive at all) and it turns out that the island is only an island in high tide. Don't see that often in books today.