...is what I think every time I look at my bookshelves now. I swapped rooms in the house and had to bring some books (out of both desire and simple physics) but it was such a hodge-podge with my categories and the length of the current bookshelves that I finally organized them by color.

Well, not completely. But randomly enough so that the juxtaposition of some of the books has led me to daydream about the fisticuffs that must be occurring when I'm not looking.

Other than anthropomorphosizing my books, what have I been up to? Beats me. Not much progress on the WIP's. Managed to finish reading The Perfect Prince and start about six other books, all of which are perfectly interesting but somehow eminently easy to put down and wander away from Catriona, Robert Louis Stevenson's sequel to Kidnapped....From the Renaissance to the Counter-Reformation: Essays in honor of Garrett Mattingly,... This Will Make You Smarter. I particularly like Jonah Lehrer's essay Control Your Spotlight so far - it's so much easier to distract oneself than deny oneself, something I'll need to work on as I'm going to have to drop some weight to deal with the spinal stenosis and the not-fitting-into-my-jeans.

I did finish something - another Untangled! 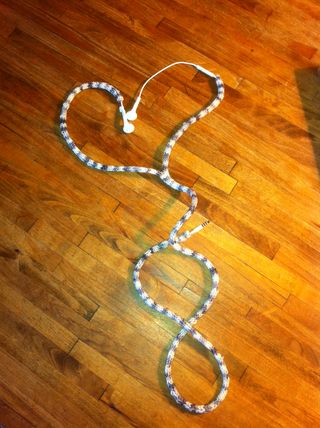 Those earbuds really do tangle up annoyingly without them. Now I actually like to untangle things but not in the dead of night and now when I want someone quietly reading to me in bed. That said maybe TWiV is not the most restful of nighttime stories....

Oh rats, I've lost the picture of Hez looking so amusingly disapproving. My old bedroom is the library, the den is now my bedroom and the craft room is a disaster.

She's spent the last few weeks wandering about the house muttering "This doesn't go here. That doesn't belong there. WHERE IS MY - what, srsly? There? You put it there? Harumph grumble grumble."

Once she realized we weren't moving, that is. For a week or so there, she just look scared and stuck to me like glue.

Love the idea of books in fisticuffs.

Poor Hez. It's a good thing she can't move things back.

I love the vision of books fighting with each other. Or arguing. Or just grumbling and giving each other dirty looks, kind of like Hez.

That bookshelf shot is a kick in the head. I'm utterly besotted. I did the color thing on a smaller scale at work.

I always look at books organized by color and snort with derision, but my bookshelf makes no sense at all, so why not color? I need a librarian to reshelve...

I love the books. Hope they're not fighting at night. Maybe they're keeping Hez up?

Your bookcase looks fun! Poor Hez. I just replaced a cat tree earlier this week, same style as the old one, stuck it in the same place even, and both mine were a bit freaked out by it at first. Silly things.

I love the visual of the organization of your books. I'm afraid if I did that I'd never find what I'm looking for though. That, plus an OCD husband who wants to classify everything done to the tiniest possible genre means my shelves will never look like that! But how appealing!

WOW --- what an undertaking! Now you've got me wondering which rooms could be switched here. . .

oooh, look at that shelf of BLACK. I like the color coding.

Poor Hez. I can just picture her leaning against you, worried about a move.

I love the earbud cozy - have been meaning to make myself one, but all that I-cord! I have nothing to offer on organizing books. It seems like I spend more time searching for the one I want than actually using it!

Poor Hez!! Now that the threat of moving is past, I can just imagine how crabby she is...

Poor Hez indeed! You should see Mags with the new dog.

Goodness, I would be on the (imaginary) chaise lounge after all that moving and reorganizing! Hez is just grumbling to avoid fainting from relief.

I've been meaning to do an untangled as I've been finding tangles each time I pull them from my bag. I'm glad to hear the "coating" does the job.

I'm in the middle of reading a book about habits and how to change them. o.O That and I'm up to about 8 push ups. Heh.

Carrie- I guess you must know where your books are, because I've never seen anyone sort them by color.

Color-coded books! Excellent choice. I tend to "organize" mine archaeologically, so when I want to find them, I have to remember when I last read a book, what I was doing, what else I was reading at that time, and then to go that layer...

You're going to move it all back in a few weeks, right? Just to miss with Hez? I hope so.

You know the way some of us could arrange yarn and stuff for hours and hours? Yeah, that's my sister with books. She'd be over in 3 seconds flat and be all over your bookcases.

I would never arrange my books by color but they're so pretty! You'd think I'd prefer color to A Few Subjects Well Organized and The Rest Organized Chaos.

Love that method of organization!