Did you know bees are responsible for coffee? 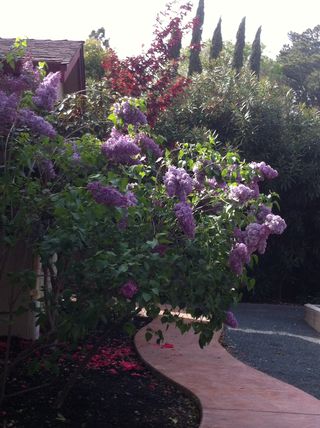 SAVE THE BEES.Well, actually that's the why. This is the how. Well, one of the hows. Google it. But pretty fascinating! 20,000 species of bees. I watched this clip So Many Kinds of Bees from Cornell University for a STEM class while filing the updated replacement pages for tax deskbooks.

THANK YOU, FISCAL CLIFF and possibly SEQUESTRATION.  Next year I think I'll cave to technology and switch to the online library.

I've been knitting! Very little finishing, of course. Restarted the breadbasket liner. started another Tudor Rose project to go with my Mary Tudor before the reprint hits the stores in November and I will probably cast on a pair of socks if summer ever gets here because Cookie will make me do it.

Lilacs before the wind and the frost got to them.

Lots of reading lately even if I gave up on David Drake's Hammer's Slammers: The Warrior. I read the begining and the end but not so much the middle. The Heretic, outlined by David Drake and written by Tony Daniel  is more my speed. Hey. That's a series. From 1991. Argh.

Still have History of the Modern Fact on my nightstand but am currently slogging through How Tradition Works: A Meme-Based Cultural Poetics of the Anglo-Saxon Tenth Century (Medieval and Renaissance Texts and Studies. Slogging not because it isn't interesting because it is, but because I had an entirely different notion of what memetics/memes meant.

I did finish One Good Turn by Kate Atkinson and enjoyed it despite the whiplash POV's. I love a good policeman turned private detective turned millionaire story and the differing narration worked reasonably well flesh to out the scenes, but it was a bit confusing. I'm glad I didn't try to read it over tax season. Also way too much animal abuse. She was clearly against it, but I skimmed more than a few paragraphs. Yes, abusing an animal is shorthand for evil to me too but I don't want to read about it or hear about it unless I can actually do something about it. We can barely convict/intervene for human on human cruelty. 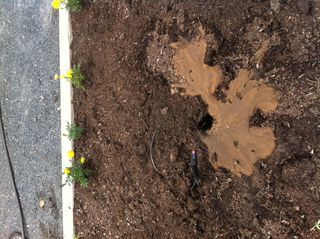 The garden is planted, the gophers have checked it out and given their seal of - disappoval? They can't dig from the bottom up because of the chicken wire, but apparently they can dig the middle. Idiots. The tomatos and the marigolds are all on the edges.

Hopefully the marigolds will do a bit better soon. The weather is veering from hot to cold (60's to 80's) which is actually quite nice but means I still can't put away my winter clothes.

Because yes, 60 degree weather is WINTER weather. And COLD. COLD.

You're back! I was thinking about you and wondering what had happened. I should remembered about the tax abyss. Hope you are well!

Interesting, I just saw an article on wikipedia last week about a European ban on certain pesticides that are believed to be behind CCD.

Your lilacs are beautiful, thank you for the picture!

Carrie- Some of Kate Atkinson's earlier books are good, Human Croquet and Behind The Scenes at The Museum- look for those.

Good to see you survived another tax season.

Good to see you. Show the knitting next time. Just saying.

You remembered your password!!!! :D Tudor rose anything counts for Mega May. Along with Mega Work Changes, Mega Lilacs, and Mega Reading. :D See!

I love bees, and am really worried about them ...

I do what I can to encourage and protect bees in my tiny little yard. Thinking about making some sort of insect "houses", like these: http://tinyurl.com/b7zhxph

They aren't good for honeybees, but other bees may enjoy them.

P.S. - Made a donation to SaveHoneyBees. Thanks for the link - sounds like they're doing some great stuff.

Save our coffee! Cute but serious. I'm planting more flowers and seeding some wildflowers to support the local bees (hopefully). Darn gophers.

Ilona Andrews just finished the Clean Sweep serial--pretty good. Have you seen it yet?

Spring may be leapfrogged over by summer here, if we're unlucky (again).

Yay for surviving another tax season! Bees of all kinds are very important and we do what we can at my house to provide food and safe places for them. Some interesting reading you are doing too. Sorry about your gophers. I thought my squirrels were annoying! I had to laugh about 60s and winter clothes. 60s here mean summer clothes!

We have a decline in bees here too. The tax stuff really does sound taxing and worrying!

You know the rules ... picture or it didn't happen ;-) Which Tudor Rose pattern? Elizabeth 1st that you put away yearsss ago or a totally new one?

Oh, brrrrr. Just read The Complaints, Ian rankin post-Rebus and quite enjoyed it.

I am reading Kate Atkinson's Life After Life -- she is such a good author. Read your book a couple years ago.

Good to have another Californian complaining about the cold. No on else seems to understand when I complain about 60 degrees...