Because a mere summer is not enough. For a WHOLE PAIR. Honestly. 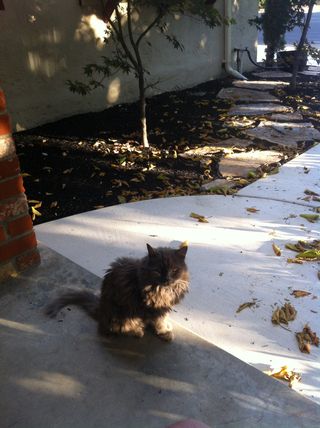 I did manage to knit one of the pair but......eh. It's toe up, which is not my thing, I like the magic of heel turns and the cable on the heel turned out to be an antler cable that doesn't excite me much either. It looked so much more complicated in the picture.

So the half way done second sock not only does not have the lace that the first one lacked but it's also going to be minus the cable. And it's still taking me longer to finish it.

In the meantime, I've cast on (about eight thousand times) (in eight thousand different patterns) a black and white variegated that refuses to be wingspan  (it just looked dingy and it was quite, quite boring to knit. Never mind that's what I was aiming for) (I need something mindless to knit on the needles for sermons, meetings, lines, TV.....) or any number of other patterns but I could really use a black and white smallish scarf.

To teach it a lesson, I frogged the 10-ish inches I'd knit of Fuse. 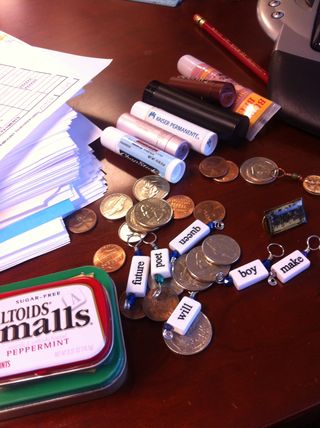 Pictured: Stuff I found in my purse looking for quarters for the vending machine. I barely wear lipstick or lipbalm so why do I have SIX tubes of the stuff? on me? Beats me.

Bah. On to books.

Binged on series this summer. I've read almost but not quite all of Lois McMasters Bujold's Miles Vorkosigan series (I have Memory up next but since I'm almost caught up........I'm saving it. So it won't be done.) and then all five of David Baldacci's Camel Club books, which, by book five got a little weary.

I do love his King & Maxwell TV series on TNT though. Edgar makes it. Hard to believe he was Opie in Sons of Anarchy.

Somewhere in between I read A Reconstruction of Economics by Kenneth Boulding, A Fire Upon the Deep by Vernon Vinge, Broken Harbor by Tana French, The Time In Between by Maria Duenas, Altered Carbon by Richard K Morgan, Life After Life by Kate Atkinson.

Currently reading The Wednesday Sisters by Meg Waite Clayton. So far, so good!

Oh, and so far (knock on wood), not on fire from the Morgan Fire.  It did creep me out and kept me up half the night when I went out Sunday night to see if I could see it - oh yeah. I could see it all right.

The mountain ridge on FIRE and firetrucks dotting the hillside. We're 7or 8 miles from it but it's bone dry (I heard 4% which is roughly drier than killed sawn wood at Home Depot) and close to a greenbelt if the winds pushed it that way.

I had library books to pick up and return last night (my branch is actng as the local emergency shelter). Coming in with me was a guy with five pizzas. Not something I see every day at the library.....

Carrie- I hope the fire doesn't get worse, but what better place to stay than the library?

You made a valiant effort with the socks. Onward.

Socks are overrated. Just saying. Hope the fire stays away

Wow, how scary (the fire). Did you like Life After Life?

Too, too scary about the fire. Stay safe.

The cable heels are breathtaking.

Ugh, that fire. Very scary. My area wasn't threatened by it, but it's not reassuring to hear that your town is being used for the staging area for fire fighters. Hope everything stayed safe for you guys!

I'm almost with you on the amount of socks finished. I have to graft the toe of sock #1 for my summer of sock. (Not socks. I didn't even finish a sock.)

I couldn't manage one whole sock over last winter. It's top down and I made it halfway just past the heel before I got distracted. You read lots of books this summer! I hope the fire doesn't blow down your way.

OH just looking at that sock makes my head hurt! I am a very lazy sock knitter. Plain vanilla, maybe a rib. Glad you are not being burnt or flooded! Just reading Mistress of the Art of Death. The author is a specialist in medieval England, and decided late in life to turn it into a thriller. Worth a look.

My summer's sock is still on the needles, although a bit larger. I hope the fire stayed away! Yikes!!

Lois McMaster Bujold's Sharing Knife series is very nice. I've read all four books and now I'm listening to the audio version while knitting. (Love OverDrive!) I'm interested and trying not to be disturbed by the difference in my reading vs. listening comprehension. o.O

Hopefully you continue to be fire-free!!

Hey, you're still knitting those socks faster than I'm knitting my SIL's Christmas socks, which I started before last Christmas...

Why is Hez looking so very ruffled?