* edited to add the link for the Hug for Snickers scarf pattern....

Pumpkin ice cream and Eggnog Lattes, it must be the Holiday season. Shockingly to anyone who's ever been around me during the holidays, I'm getting Christmassy. I actually had on the radio station that plays Christmas carols merrily singing along with it last night, without even so much as a mini rant about it not even being Thanksgiving yet for pity's sake. You're still not going to find me shopping Friday. I'd rather be boiled in oil.

Here's the finished * Hug for Snickers scarf, draped on the cat tree, appropriately enough, since Hezekiah refused to pose with it and every picture I took of me wearing it are never going to see the light of day. 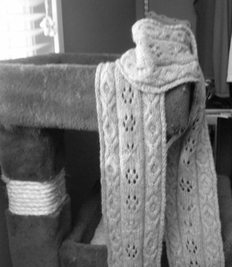 Ta da! The finished Endpaper Mitts. Can you tell one is smaller than the other? It's not so much smaller I can't wear them, in fact, the smaller one feels kind of fabulous on my right hand while knitting/mousing. 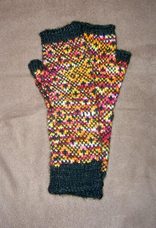 The Diagonal Rib hat I knit up during Day One of the Knitting Retreat... 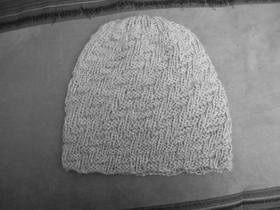 The Selbuvotter Mittens that in no way can I knit in public, or with anyone speaking to me, with the TV on, imperfect lighting....I changed the bottom chart because I didn't like how the original looked, not that you can tell which one I'm knitting. 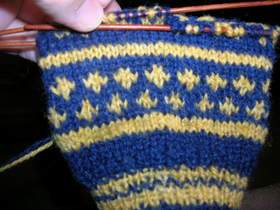 There has got to be a way of putting these in columns. It'd be nice to have the picture match the caption for a change.

As a [television viewer] public service announcement, here's where you can find out how many episodes are left on your shows. Mind you, they're all at least one down. 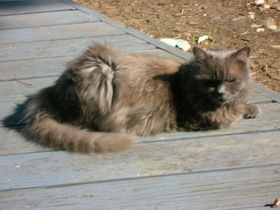 Think Hezekiah wants to come in the house? That cat stays outside every daylight hour (well, except morning. She does not do mornings.)

Take a good look at that deck. That's why you're not supposed to use indoor paint on an outdoor surface. Men.

I finished the Endpaper Mitts! Once I weave in the ends, I'll post a pic. So pretty. I was a little panicked about having enough yarn, and if I'd made two medium sized ones, it would have been close, but enough. As it turns out, the small was really the right size for me. Mind you, I have one medium and one small but it's not that glaring a difference and definitely not enough to redo. They're so pretty!

Remind me. Use smaller needles when working ribbing. Why is that so impossible for me to get through my skull?

The Hugs for Snickers scarf is getting a wee bit longer, I've knit nothing on the Curve of Pursuit, Mary Tudor, or Lace Edged Elegance aka Golden Gate, but hey. Deadline today. It's been all about nothing, nothing nothing and then WORK! No pictures today either, it's all panic and then I'm out of here for the week.

I wish I'd gotten a picture of the sight I saw yesterday on the way home from work! I was sitting at a stoplight in a half commercial/half apartment area noticing your average semi gangster big pants long t-shirt looking guy crossing the street in front of me taking a long look at a nondescript down-at-the-heels looking guy walking on the sidewalk. The guy looked......well, nondescript. I'd say hard up, but that seems to be the fashion. (I'm not crazy about the big pants long T-shirt look either.) I mean, clearly nothing that Long T-shirt would register normally. So I take a long look at nondescript down-at-the-heels guy and think that maybe he's holding something. A puppy? Is the guy a creepy predator? A stack of letters? Is he a misunderstood soul?

It finally dawns on me that yeah, he's holding something and that something is wrapped around his neck too. Something like this. 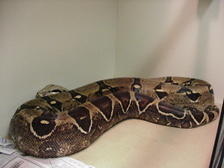 And naturally, not only do I not have my camera with me, by the time I remember my iPhone has a camera, the light is green and the traffic is making me move and I miss my shot. Bummer, but hopefully I won't see that again. Yes. I admit it, I'm afraid of snakes. I'm afraid of small harmless garter snakes (suuuuure they are. This is rattlenake country), so imagine my fear of big huge ginormous maneating snakes.

TV TALK: I hope everyone is watching Brothers & Sisters Sunday nights. It's a little suspect that every single one of them is having relationship problems (well, not Kitty and Rob Lowe). Oh and (WARNING: SPOILER discussion of last night's show) what kind of plan is it to save your marriage to go home and live with your parents, particularly when your father clearly thinks your husband is not the best you can do? Taking your one brand new surviving twin with you. It did crack me up when Sloan offered to spot him three strokes if he wrapped the 9 Iron around his father in law's neck.

Tonight: Chuck, Heroes and Journeyman. Heroes didn't even get a "what's happpening" blurb in our "TV Guide". For the record, I hate the new TV "Guides". Five different grids for different time periods, most of the shows labeled "various" - like I need a "guide" to tell me there'll be various programs on TV - it's pretty much a given. Grrr.

On Journeyman, it looks like Dan gets braced by both Katie and Maybe Not Dead Fiancee tonight. (Have you noticed I'm having the worst time remembering names this season?) Funny, the one thing that almost put me off the show completely is what I'm finding the most compelling.

No Bones or House tomorrow night so it's all about NCIS, The Reaper and Damages. FX is running a marathon of Damages on Saturday- 12 episodes if anyone wants to catch up.

The Women's Murder Club last Friday night was a little disappointing. In fact, I watched Friday Night Lights which SHHHH! is not half bad. Naturally last week was the lowest ratings its ever had. Joy.

Thursday night I have got to watch Viva Laughlin (CBS). It's up against Law & Order Criminal Intent (USA) at 10pm, but I have a feeling it's not going to be a conflict for long but I'll probably love the dumb thing.

Knit Bits: I'm having massive desires to cast on the Spanish Knight and Medieval Tapestry (both out of Jade Starmore's A Collector's Item book.) Naturally I have nothing in my stash. Also? I have WIP's! WIP's that are reasonably close to being done if I'd work on them. 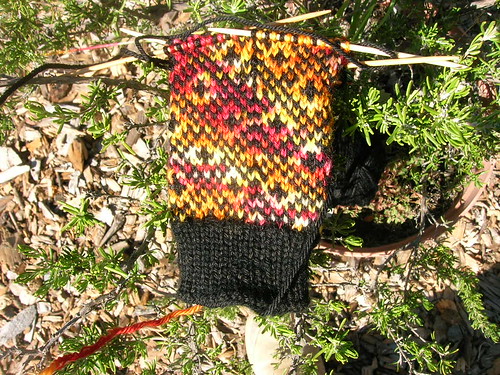 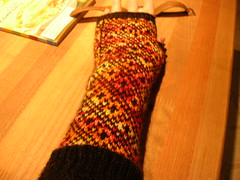 Here is weird lighting to offset the other picture. Gah.

I'm supposed to tag five other bloggers for this meme but it has really made the rounds, hasn't it? I tag Elspeth anyway, Alum Creek, hand eye crafts, Knitting in the North and On the Needles.

Shockingly, I managed to read 5 books in September, even if it did take me something like 3 weeks to finish Coyote Dreams. I do like CE Murphy's Joanne Walker series but that migraine made it hard to read and I mostly just wanted to shake her most of the book. Also read:

Equally shockingly, the Non Fiction Five Challenge that Joy hosted ended yesterday and I actually read more than the five the challenge......uh, challenged.

But, most importantly, what you should watch on TV.

Oh jeez, what's on the rest of the week? I'm still not up on the schedule.

In knitterly pursuits, I'm not quite done with the Endpaper Mitts, I'm ripping along on the Curve of Pursuit blanket - I love this pattern, I'm not sure why I waited a year to cast it on, the Mountain Stream scarf is coming along (although I did have a snafu at the border naturally) and possibly I cast on a pair of Latvian mittens.

Did I finish anything? Don't be absurd. 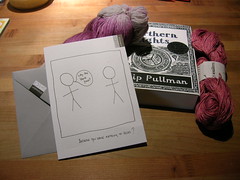 Very cool, no? I've been wanting to read Philip Pullman for awhile now, I keep hearing such good things about his books. And voila! In my library at my fingertips. And apparently it's some kind of reverse birthday gift - Happy Birthday, Susoolu!

Okay, now I know that there is suffering and anguish (too much) and there is no world peace and there are far, far more important things in this world, but everyone just wish "FINISH A FRAKKING KNIT PROJECT" thoughts at me anyway, willya? It's my only hope.