It Can't Be Thanksgiving Next Thursday

What is happening with this year? It was flying by as it was but the last month or two has zipped. Slow down, willya? I even attended a *Knitting Retreat With CPE credit [aka continuing ed tax class for two days] and it still flew by. Oh, that reminds me. As long as vehicles over 6,000 pounds are depreciable, Green is mocked. (Other than things like tractors.) 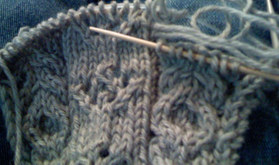 See that noodle mass of yarn? That's what I was doing on my Snickers scarf practically every repeat (not the patterns fault! Definitely the knitter.) See the also twisted wrong cable on the other side?  Because I'm not lying when I say I don't get left and right. Not instinctively anyway.

It did have the benefit of being an amazing and astonishing spectacle for all the kids to watch though.

And I still love cables. It's why I learned to knit.

This is the mindless knitting I was working on Thursday of my "Knitting Retreat". 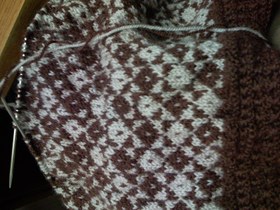 Oh, it's sideways. Anyway, last November when I started it, I was dragging around a chart and referring to it constantly. This November? Never even glanced at the chart and  it worked out beatutifully as my mindless Knit While I Study/Talk project. After the inability to tell left from right cables, made me feel a whole lot better.

The Snickers scarf is done and blocked. It took me a shade more than two skeins of Cascade 220 and I think that's only because I did 3 or 4 extra repeats (because I neglected to read the instructions about it being a directional pattern.) Oh well. It's pretty. (Pictures later, when hopefully I can er, entice Hezekiah into modeling it. The rest of the skein I knit up a diagonal rib hat called Chameleon from Nicky Epsteins Hat Book.

PROJECT RUNWAY's new season started! Wednesday night at 10pm on Bravo. Simone deserved to go for that dress, it was terrible! Ugly, sewn badly and completely mismatched. I felt badly for her though. Being the first to go would be awful. Romi's dress was okay, pretty, but I really liked Christian's. Elisa is a wee bit crazy but she's going to be fun to watch. And really, other than below the knees, that dress was gorgeous. Not a gapped seam in sight.

I want Helio or Mel to win Dancing With The Stars. I can't decide, they've both had some fabulous dances these last two weeks.

Anyone else watching Brothers & Sisters? From week to week I forget how much I love this show. I keep thinking that it's just going to go horribly, horribly wrong - like talking Justin into taking painkillers to cope with his war injuries. I knew he was going to get re-addicted and he did and it was all in what? Four episodes? What I didn't know is that the writers would pull it off so well. I love how the show captures the family squabbling love thing.

Hopefully Journeyman will pull off the sibling rivalry bit without losing Reed Diamond. Right now, I really just want to smack Jack into the middle of next week. Snoop on your little brother, moon after his wife (your ex girlfriend) but try not to pull a federal case - literally - down on him. So I wonder if the quartz crystals, tachyeons and the mysterious Professor have the secret to Dan's journeying? 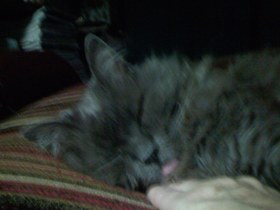 * shamelessly stolen from Kmkat And her Kneedles.