For Love of the Glove 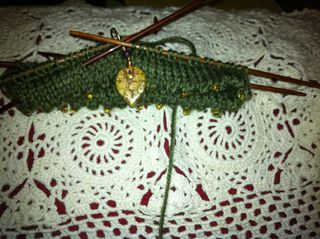 It began well enough too. Look at the darling beads and how nicely the rosewood dpn's (double pointed needles) look with that stitchmarker. Sweet, eh?

(The beads are left from my Georgia O'Keefe Beaded Scarf kit I won (and have already knit up, thankyouverymuch) in a contest at The Fairy Godknitter's - she's now got an Etsy site, btw, Cupcake Fiber Company for "beautiful batts of hand dyed spinning fiber".  (I quote because that's a perfect description of those lucious swirls.)  Hmm. I think I need a closing parenthii. Parenthesis? Parenthetiwhatchacallit? Yeah. I do.) 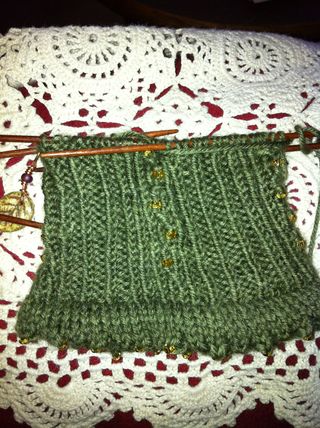 Uh oh. The beading - that originally I hadn't planned on doing - is coming along nicely. It only took me approximately two weeks two days a couple of hours to figure out how to get the beads on the yarn (Cabin Cove's Merino/Nylon in Olive).

Julia's instructions for using thread & a needle to place the bead on the stitch as you knit (and not pre-stringing) is probably faultless but.....it took me long enough to realize I could use a bead needle, much less something new.

So. Where was I? Oh yes. The two stitch bead cable is winding nicely and I'm clipping along......uh oh. After the hem turn, there's a four stitch bead/cable. As the pattern reads. It appears to be missing.

Hmm. Anyone seen any good movies lately? I can't wait for The Mechanic  to come out (Warning: a slightly starling clicking noise but no music, thankfully. Why do sites do that? Do they think we're all at home surfing the net?), even if no one can replace Charles Bronson and they've already tried in the Christian Bale version - whoops, no, I'm thinking of The Machinist. 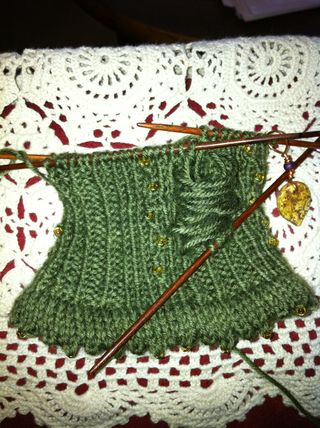 Sigh. Do I always do this? Is it on purpose? It is fun to unravel the stitches and then work them back up differently - it's a small version of magic -  but it's got to be faster to do it right the first time.

So. Read any good books lately? I finished Not For Profit: Why Democracy Needs the Humanities by Martha Nussbaum. I agree with her premise but.....I started arguing with her in the margins. It was taking me weeks to finish a 158 page book. (Actually, I think it was 143 pages but who am I to argue with the Library of Congress?)(Incidentally, awesome link to find out the actual published date of a book. It's maddening to look up say, Pride & Prejudice and read that it was published in 2004. Really? Really? 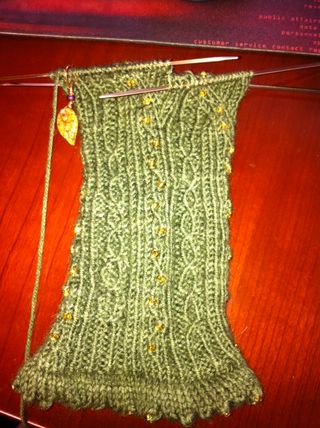 Oh sure, re-published. I want to know when it was written. Voila, Library of Congress catalog.)

Anyway. Not For Profit...I completely agree, we need to have liberal arts/humanities in the schools. It's important for scholarship and citizenship. I'm not sure where anecdotal evidence vs a representative sample falls on the proof side but I concede her point. We shouldn't teach solely for the profit of the economy. Society needs more than that. I'm just not sure how far we'll get if we don't have jobs to support our philosophical pursuits. I'm sure the target audience travels in more rarefied circles than I do in any event. 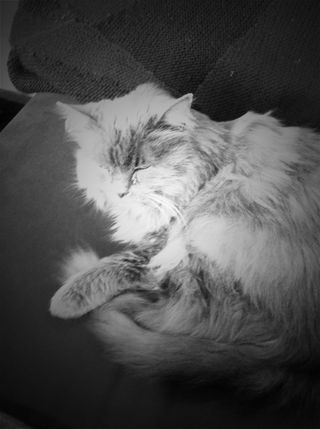 There are the followers and the followed. The sheep & the shepherd. The wolf & the lamb. The fiber & the dye.

The metaphor and the muddle.

(I admit, the point where that might have come close to making sense was rewritten but I'm too enamoured of it to edit it out. Yeah, I'm like that. It was deliberate. So there.)

Now I'm reading Eifelheim. Cool! Takes place in the present and 14th Century Germany, I'm not quite sure how yet.