Bribery or human sacrifice.......Which one do you think would hurry the renovation along? I'd show pictures but they look almost exactly the same. The house is still unpainted, the furniture is still stacked into the middle of the rooms, the TV's and computers are unplugged and unreachable (well, I did manage to hook one up to watch Miss Marple last night and you can bet I'll be watching The Closer tonight) I'm running out of patience, clothes, toiletries......and the dust is killing me. I spent most of the weekend with a migraine.

Managed to stave it off a bit Saturday and me and the BFF went to see La Vie En Rose, the movie about Edith Piaf. I knew it was 2 1/2 hours. I knew it was in French and subtitled. I'd heard that the first half  was depressing. Um, wow. The whole thing was a bit depressing. She had one hard life. She did however KNIT! She was knitting on the beach, she offered to knit a sweater on a first date - she told an interviewer that she loved to knit......... 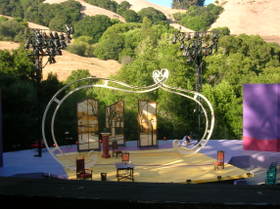 Man and Superman by George Bernard Shaw at CalShakes Thursday night was splendid. Everyone should read/see the play. For once a battle of the sexes didn't seem stacked against one or the other.

I finished Earth Abides by George R Stewart......I did like it and it was a good book but I have a very hard time not judging the 40's and the 50's by today's standards because the men (who are the protagonists of the story) are such sexist, chauvinist, rascist guys! (I had the same problem with Alas Babylon.) In Alas Babylon, Randy almost immediately reestablishes the government status quo, his brother's wife and daughter of a neighbor are relegated to secondary roles.

In Earth Abides, Ish is much more laid back - very laid back in fact. I found it hard to believe that a man who loved research so much spent so little time in the UC Berkeley library and through the generations couldn't seem to interest anyone in reading or inventing. It was all scavenging. Naturally his one bright hope is his youngest son - not the son's twin, who is a mere girl and nowhere near as bright (I confessed it grated on me how the women were denigrated, didn't I?) Oh, and when he discovers his wife's heritage.....argh. It's all very civilized but it just oozes caucasian patriarchal superiority. Which, yeah. Written by and in the times when it was stll standard - and I'm sure GRS was ahead of the curve.

I'm enjoying Lady Audley's Secret so much more. Still in a patriarchal society, but maybe because it was written in 1862 and by a woman is the difference. Even Robert Audley's railing against women was cute. Personally, so far I don't see a thing wrong that Lady Audley has done - well possibly one. Thank heaven the times have changed. 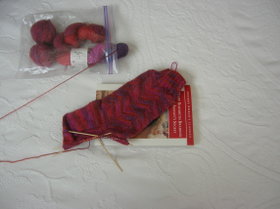 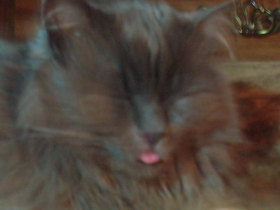 Hez is not a fan of not having a windowseat. She doesn't seem to care that I can't get to the computer at the house, but she cares deeply that she has to jump from a lowly laundry hamper(!) and crouch on a windowsill. Also she would like new treats.

I'm waaaay behind on emails and blogs but eventually I'll get caught up!

Wouldn't It Be Easier to Just Run Away & Start Over?

This is what the garage looks like, after clearing & culling out most of the moveable excess. Presumably some of that is going away (EcoHaul sounds like a fabulous solution, let's just see what they'll cost.)

I have aches in muscles I'd forgotten I had and about ninety million more things than I remembered. The first painter has arrived (but he's sitting in his car, either we're scary or he's afraid to start without his boss.)

I can't wait for it all to be over.

Oh! Question One: Is it a bad sign when it cools down (finally) and the first thing that happens to you on Saturday morning is the breezes slams the bathroom door shut - sans shoes, sans books, sans doorknob.  Fun.

Naturally I have three pairs of socks out to work on and GG. (Who knows when they'll actually be finished.) The Beaded Socks have waaaaay too many beads for anklets. Question Two: Should I frog it and make a lovely stole and do the beaded socks with more yarn and more beads another day?

I'm almost finished with How to Read a Novel by John Sutherland. Not what I'd expected, it's a quite entertaining guide to the various parts and history of a novel. Question Three: Do I start Earth Abides by George R Stewart, a 1949 post apocalyptic sci fi novel (he's a UC Berkeley professor too, so local), or Lady Audley's Secret, an 1862 Victorian sensation novel by Mary Elizabeth Braddon? They both should mirror the turmoil in the house.

Hezekiah is not amused. She is having fun jumping in and out of previously unreachable places but I haven't been able to get a picture of her where's she mostly in the picture and/or discernably cat.