Magic - the theme of my Knitflix swap package from Phoebe at Knit Happened - check it out! Jalapeno popcorn, The Illusionist, 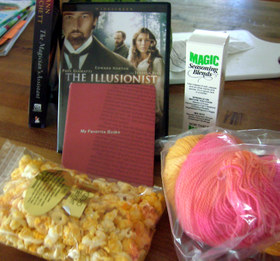 Ann Pratchett's The Magician's Assistant, a set of Magic 8-Ball stitchmarkers, a small notebook called My Favorite Books, handpainted yarn named Hawaiian Sunset - doesn't it look like a sunset? Well, really it looks like a Tequila Sunrise, but close enough. ;)  And some Magic Paul Prudhomme seasonings. 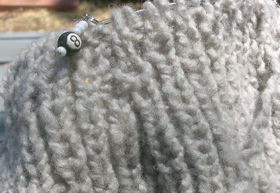 An extreme close up of the Magic 8 Ball stitchmarkers on the helmet-in-progress. It'd be an FO by now too, if I hadn't frogged the darn thing four times. It's not as if it's going to a beauty pageant but when the decrease lines jump a stitch or halfway down a lonely dropped stitch is hanging off a cliff waving like a semaphore, it's gotta be repaired. 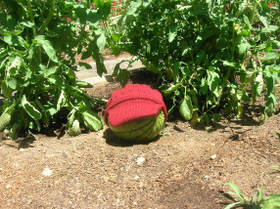 I have an FO! It probably qualifies as a UFO Resurrection, it was abandoned sometime over the winter.

Topi from Knitty, hanging out in the tomatos. (The watermelon was store bought, I'm sad to report. And there's nary a tomato on the vine because tomatos are SLOW! SLOW! Er, ahem. )

My plan is to finish it tonight while continuing to watch the Stargate SG1 marathon until the final [sob!] episode on Friday. You know, now that The Closer marathon yesterday is over. Anyone else catch the season premiere? That Gabriel is going places.

My plan is also to finish up GG and maybe do a row or two on Mary Tudor and possibly, possibly finish one of the Jaywalker and/or beaded socks, but you know where good intentions will get you.

Wildly casting on for a new project(s). 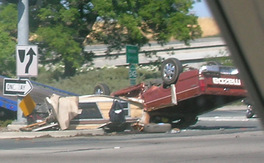 This was what was slowing the traffic on the street - not even the freeway (although it's right by a freeway on ramp) on my way home tonight - drive safely out there! 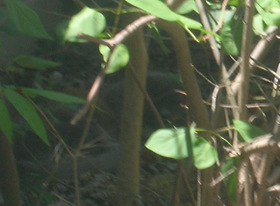 Look closely at that picture (you'll probably have to click on it to get it big enough.) Sweet, eh? She can't just lay out with me in the backyard. She's got to hide in the bushes. The bluejay might make fun of her.

My other plan is to read Midsummer's Night's Dream on the summer solstice for the finale of Carl's Once Upon A Time Reading Challenge. 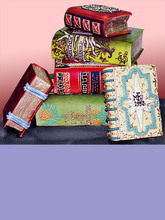 (The picture of the cake books are from Colette's Wedding Cakes. Last week's picture of the color coded bookstore was (temporary) performance art from Adobe Books in SF.)

From Booking Through Thursday:

It varies. It used to be every spare moment, but since I've taken up knitting they vie for attention.

I read at signal lights sometimes (or sometimes I knit - signal lights are insanely long), I usually read before I fall asleep and depending on the book, I read every waking moment I can snatch.

Thank you for your condolences on the late, not so great Retro Cardi. Can I count it as my February UFO? Not that I don't have plenty - ah, more to choose from. Dressmaking details on a knit raglan. Sheesh.

Oh, and thank you for all the lovely er, reasons for buying Scout's Messenger Bag! You have all been entered unknowingly in a contest for a Nicky Epstein book. There will be two winners, to be announced shortly. 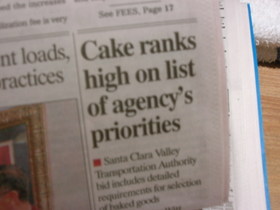 Oddly enough, there was no mention of Brigadier-General Jack O'Neill in the article.