I Finished A Sweater! Naturally There Will Be No Photographic Evidence 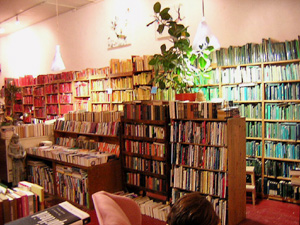 Birdsong from A View from Sierra County tagged me with the Sixth Picture meme...

And that picture is the result of the artistic vision of Chris Cobb going hog wild with 20,000 volumes of used books at Adobe Bookstore in San Francisco back in 2004. (All independent and other booksellers are now cringing in horror and recognition. "Do you know the name of a book I read [eons ago] at [miles away]? The cover was green. [said more hopefully than helpfully])") (NPR piece)

Selfishly I will tag the people whose pictures I love, MrsPao of Mumblings, Felicia of Fluffy Flowers, NeedleDancer of Knitting in the Shadows, Marina at Stranded on Fair Isle, and Bookfool. 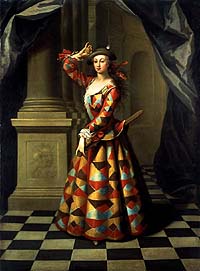 You are a mystery, a jack-of-all-trades. You have the king's ear, but also listen to murmurings of the common folk. You believe in the value of force and also literature. Truly you are the puzzlement of the age.

Take The Who Would You Be in 1400 AD Test at HelloQuizzy (picture fromPeople Play UK - Harlequin in England).

I'd post the pictures of my progress on the Curve of Pursuit - I'm starting to use a skein in each quarter, the miniscule yet steady progress on Mary Tudor, the basic box shawl that I've gotten an awful lot done at stoplights  -  the UNBELIVEABLY completed Lace Edged Elegance, but as it turns out, somewhere in the move, I've lost my camera cord. Grrr. 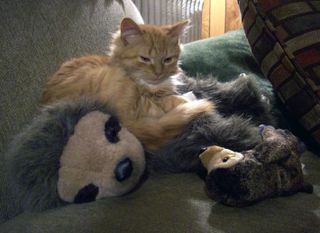 Like many others, I was shocked and saddened to hear about Dewey. I piocture her happily at the base of a mountain of To Be Read books but I still can't wrap my head around the awful news.

Nerissa (the niece) says "Everyhing can be helped with the help of one's sloths." I think she takes after my side of the family.